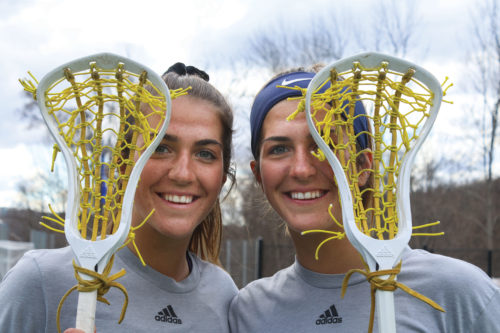 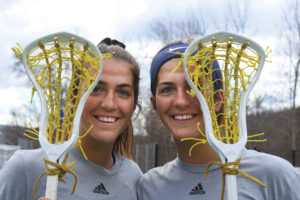 [/media-credit]University of Virginia psychologist Eric Turkheimer spends his professional time studying how interactions between genes and environments shape human behavior, specifically in regards to identical twins. According to Turkheimer, identical twins start off with similar personalities, “but as time goes by, they slowly drift apart from each other.”

Identical twins, second-year teammates on the Quinnipiac women’s lacrosse team, roommates, you name it. The Bobinski sisters have spent their lives embracing their similarities that extend far beyond DNA and physical appearance.

“She’s my favorite teammate, my best friend, and it’s great to have her as a sister.” Victoria (at least I think it’s Victoria) said as she turned toward Ashley with a smile.

The two have been inseparable since their time in the womb. The sisterly bond has only grown stronger since they stepped onto the lacrosse field as young girls and decided that no matter where they played, they would play together.

“We wouldn’t even look at a school unless they wanted both of us,” Victoria said of their college recruitment. “So we knew that we were coming together.”

Fortunately, Quinnipiac pounced on the package deal that brought the Bobinski sisters to Hamden. Ashley and Victoria could have saved paper and used one resume when they applied. After all, their experiences are exactly the same.

While playing at Kinellon High School in New Jersey, the Bobinskis posted almost identical stat sheets. Both netted their 100th career goals during their junior season, earning them both All-Area First Team honors. Victoria finished the season with 57 goals and 15 assists. Ashley netted 56 goals with 15 helpers. Both received US Lacrosse Academic All-American Awards as well, leading them to both be named team captains as seniors. You could make a Xerox of one sister’s track record and pass it off as both of theirs.

It’s possible that the Quinnipiac Athletics website did just that, as Victoria’s player bio page describes her “playing on the same team with her identical twin sister Victoria.”

If Quinnipiac head coach Tonya Kotowicz had any trouble deciphering who was who when looking over the Bobinski’s resumes, she was in for a tougher assignment when the two first arrived to Quinnipiac campus.

“Not only was I trying to learn all the names, nicknames and numbers of 32 players, but also trying to learn who the twins were,” Kotowicz said of the Bobinski’s first season with the team, also her first season as head coach. “Thank God they have different numbers. At first, that’s all we went by.” 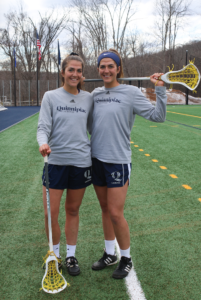 [/media-credit]Kotowicz, the Bobcats and the athletics website now have other landmarks to use to decipher the twins. Last year, in their first season on the team, the duo cemented their legacy in Quinnipiac lacrosse when they were part of the one of the biggest moments in team history, a game-winning goal against Siena that clinched the program’s first-ever MAAC Tournament berth.

With the Bobcats clinging to a 10-9 lead late in the second period, Ashley lingered behind the Siena net while her sister crashed towards the goal. Victoria took the crisp centering pass from Ashley and fired it home to give the Bobcats a two-goal cushion. The Saints responded with one of their own, but the Bobcats held on for an 11-10 win and a spot in the conference tournament.

Truth be told, Ashley could have hit Victoria in stride with her eyes closed. The two were just going off muscle (and maybe genetic) memory.

“I knew she’d be there,” Ashley said. “Any time where I’m low and see her up top, I know she’s going to cut and catch. I think having that confidence and connection helps us play well together.”

Chalk it up to a sisterly bond, or a sixth sense that only the two of them could share together on the field.

“We definitely have our little two-man game that we’ve played for so long and carried over to here,” Victoria said. “We know what spots on the field we like best and where to find each other.”

Their teammates have grown accustomed to finding the Bobinski twins on the field (they’ve found Ashley for a team-high 20 goals, and Victoria for another four), though they may not always know which sister they’re passing to.

The freshmen on the team constantly ask the upperclassmen for tips on how to decipher the two. The seniors offer any help they can, like how Victoria’s hair flips to the left and Ashley’s to the right. Other than some microscopic differences, even those who have played with the Bobinskis since the beginning have trouble distinguishing who they’re guarding in practice.

“Ashley just cut her hair, so that helps us,” senior Kiera Kelly chuckles.

Ashley and Victoria are used to it by now.

“It’s a common thing,” Victoria says of the team’s difficulties putting a name to the face. “Our teammates know the difference between us, but on the field it gets tricky when we have goggles on and we have the same uniform on.”

So where exactly do the Bobinskis differ?

“Their positions,” Kotowicz laughed. “That’s about it.”

That may be where the differences end for Ashley and Victoria. Away from the field, their lifestyles are more of the same. Both are math majors looking to become high school teachers and lacrosse coaches after completing their masters in education.

“Maybe one day we’ll coach against each other,” Victoria said before Ashley cuts in to offer an alternative that is more fitting to their identical narrative.