Dominance, how does one define it?

The fact of the matter is that dominance should be measured using a combination of championships and statistics, as well as performance in the clutch and overall importance to his or her sport. When you think of a sport, you generally think of one single player as the face of that sport.

On Tuesday, March 20, ESPN’s Peter Keating released his ranking of the most dominant athletes of the last 20 years. Keating used a five-step method to measure the dominance of each athlete.

Essentially, he used the top sports leagues in the world that had annual revenues a $100 million or more and athletes that were highly rated in reliable annual rankings over the past 20 years. Then, he rated those top athletes by the best single performance metric available, adjusted these ratings to normalize athletes’ scores in each sport across time, narrowed our focus to the top four athletes each year in every sport, then adjusted the data again to put these players, across sports, on a common baseline. Keating then added the results in which one “dominance share” equals one standard deviation of performance by an athlete beyond the top four players in his or her sport for one season.

This seems really complicated, and Keating didn’t even get the right results. Outside of his top five, Keating most notably had Tom Brady (NFL) listed at No. 20, behind athletes like Annika Sorenstam (LPGA, No. 6), Lauren Jackson (WNBA, No. 13) and Mike Trout (MLB, No. 18).

Tom Brady is the greatest quarterback of all-time and has won five Super Bowls across 15 years. All he did this year, at age 40, was win his third NFL MVP award and lead his team to another Super Bowl appearance (his eighth in 16 years as a starter).

Sorenstam retired from golf in 2008 after winning eight major championships since 1998. For reference, there are four major championships per year, meaning she won eight of 40, compared to Brady’s five of 16. She also played just 10 of the 20 eligible years.

Jackson played in the WNBA from 2001 until 2012, winning two titles and three MVP awards. Thinking of women’s basketball, I believe more people point to Lisa Leslie or Maya Moore. And, again, Jackson played just 11 of the 20 years.

Trout has been one of the best players in baseball since he joined the Angels in 2012. Key word, though…2012. He has played his sport professionally for six years and only made the playoffs one year. Brady has made the playoffs in 15 of 16 years.

So, while Keating’s list is utterly ridiculous, I am going to take the time to give my top five most dominant athletes of the past 20 years. Here we go.

No. 5…Michael Phelps. The American swimmer was unranked on Keating’s list. Unranked. Phelps has competed in every Summer Olympic Games since 2000 (when he was 15 years old). He won no medals that year, but that was just the beginning.

In 2004, he won six golds and two bronzes. The 2008 Beijing Olympics was Phelps’ coming out party. He won a single-Olympic record eight gold medals…every race he competed in. He came back in 2012 and won four more golds and two silvers. After that summer, he took two years and was supposedly retired. In 2014, he decided to make a comeback. Phelps competed at the Rio Olympics in 2016 and won five gold medals and a silver. He has 23 gold medals, an Olympic record.

Phelps was an Olympian from age 15 until age 31, a longer span than any athlete in history. He was the American flag bearer at the 2016 Games. Phelps is truly one of the most dominant athletes in American history, and it was blasphemous that Keating left him off his list.

Brady was picked 199th in the 2000 NFL Draft and came out of nowhere to win the Super Bowl in three of his first four years as Patriots starting quarterback. After that, he went nine years without winning another, but he made it to two during that time and won MVP in 2007 and 2010.

More recently, the Patriots have made it to the AFC Championship game for the past seven years and 12 of 16 years with Brady under center. He has an NFL record five Super Bowl wins and four Super Bowl MVPs. The greatest quarterback of all-time deserved better than Keating’s ridiculous ranking.

No. 3…Serena Williams. The most dominant female athlete in history. Keating yet again missed on this one, ranking Williams 12th. I’m still not sure how…

She has a women’s Open Era (1968-present) record 23 grand slam tournament wins (all since 1999) and 13 grand slam doubles wins (all with her sister Venus). She also has four Olympic gold medals (three doubles, one singles).

To put that dominance in perspective, Williams has won a grand slam (either singles or doubles) in 16 of the 18 years from 1999 to 2017. On top of that, she only competed in one of the four grand slam tournaments in 2017 because she was pregnant. You read that right…she won the 2017 Australian Open while eight-weeks pregnant.

Her importance for tennis, women and African Americans make her one of the most dominant athletes of our time. She continues to rule the tennis world today, nearly 20 years after winning her first U.S. Open in 1999. Williams’ sustained dominance for nearly the entire 20 year criteria put her at No. 3.

No. 2…Tiger Woods. Ignoring Woods’ off-the-course life, there is no denying that he is one of the most important figures in sports history. Golf was simply a white man’s game before Tiger came along in 1996. He is second all-time with 14 major championships, with 13 of those coming after 1998. Two of those wins came by 10 strokes or more, the only two times in history that has happened.

Tiger won his 14 majors over an 11 year stretch. Jack Nicklaus, the only player with more majors than Woods, won his 18 majors over 24 years. An 11-time PGA Tour Player of the Year, Woods’ dominance in golf was unmatched in the history of the sport.

From 1997 through 2008, Wood had a combined 126 shots under par in major tournaments. There were 138 other players who played in at least 40 major championship rounds during that time. Woods was 189 shots better than anyone else (Joe Ogilvie: 63 shots over par), according to GolfChannel.com. Dominance in its purest form, and it wasn’t even close.

No. 1…LeBron James. I’ve slandered James plenty of times in my life. He isn’t Michael Jordan…he never will be. Jordan won his sixth and final title with the Bulls in 1998. Since then, James has established himself has the most dominant athlete on the planet. 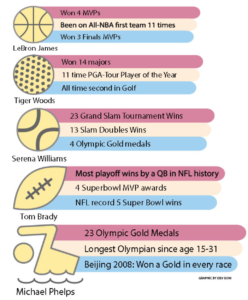 [/media-credit]In 1999, the St. Vincent-St. Mary’s high school freshman burst onto the scene, averaging over 20 points per game and leading his team to a state championship. He was named Ohio’s Mr. Basketball, the award for the best high school player in the state, for the final three years. James’ team lost six games in his four years.

In the NBA, James has made the All-Star game every season besides his rookie year. From 2004 until today, James has been the face of the NBA. He came in with all the expectations in the world, as noted in Ryan Jones’ 2003 book “King James: Believe the Hype.” The thing about James is that he’s just gotten better with age.

He struggled early in his career with inferior teammates, but once he went to Miami in 2010, James officially established himself. Since then, he’s made the NBA Finals all seven years, going 3-4 (also lost in 2007). Not a great NBA Finals record, but the fact that nobody in his conference has beaten him for seven (and likely soon to be eight) straight years shows his dominance.

LeBron James is the NBA of the 21st century. Not Kobe, not Shaq, not Curry. It’s LeBron. He’s won four MVPs, been on the All-NBA first team 11 times and won three Finals MVPs. The numbers that he is still putting up at this point in his career is comical (27 points, nine rebounds, nine assists per game at age 33). All of the hate that LeBron has gotten will someday turn, and he will be appreciated as the most dominant athlete of the 21st century.

So, that’s it. Dominance is really hard to measure. It was tough to leave people like Usain Bolt, Roger Federer and Lionel Messi off my list. When it comes down to it, I simply felt the athletes listed above were the most powerful and successful athletes in the sporting world. This is not necessarily a list of the best athletes of the last 20 years, but the ones that had the largest stranglehold on their respective sport.