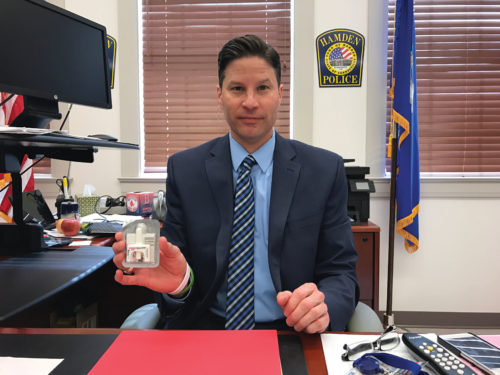 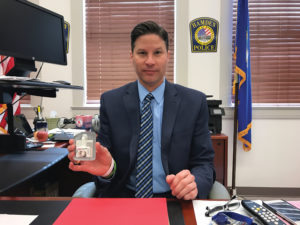 [/media-credit]The opioid epidemic is still gripping the country. There were 42,249 opioid related deaths in 2016, according to the Center for Disease Control and Prevention. Connecticut alone had over 1,000 opioid overdoses in 2017.

The Chief of Hamden Police, Thomas Wydra and Fire Marshall and Training Officer for Quinnipiac Public Safety, Rich Hally, are both determined to be a part of the local and national solution.

As of Friday, March 23, all Hamden Police officers were trained and equipped with at least two doses of Narcan to reverse the effects of drug overdoses. All Quinnipiac Public Safety will be fully trained by the end of this week and will start carrying shortly thereafter.

Narcan is a company that provides the reversal effect of a drug overdose. The only active ingredient in the spray is naloxone hydrochloride, according to The Recovery Village. There are two forms of administering Narcan, injecting Naloxone into the thigh or leg, and the nasal spray.

Quinnipiac Public Safety is in the process of getting trained on Narcan nasal spray. Their training started in February, according to Hally. Half of the department has been trained, the other half will be trained by the end of the week.

Hally said that once the entire department is trained certain officers will also start carrying Narcan nasal spray. The patrol officers who drive the cars that contain first aid kits will most likely carry the spray. Each officer who will be equipped will carry two doses.

Hamden officers have not had to use the spray on anyone since Friday, but Wydra predicts that will change.

Wydra speculates that officers will use Narcan 10 to 50 times in the next year.

In the past, police officers have not been responsible for carrying medical substances. But because this issue is growing exponentially, more first responders are encouraged to be equipped with this life saving spray.

Wydra said that the primary function of police officers concerning overdoses is to investigate whatever crime may be involved.

“We’ve gone so far past that in this country,” Wydra said. “We have an obligation. At the very least, a moral obligation.”

In the past two months, New Haven County alone has 400 reported opiate incidents that were brought to local hospitals, according to the New Haven Department of Health. That’s 200 reported incidents a month and 50 a week.

Equipping every officer in Hamden with two doses of Narcan was not a cheap task. According to Wydra, the department spent between $500 and $1,000 on the spray. He said that each individual dose cost approximately $20.

“It is expensive, but it’s the price you put on a life,” he said.

Public Safety received the shipments of Narcan thanks to a grant from the state.

Narcan has huge benefits, but there are also some drawbacks to equipping an entire police force and campus officials with a drug overdose reversal drug.

Karen Ragaisses is a clinical assistant professor of nursing. She said that the time frame that Narcan must be administered after an overdose depends on the type of opioid that was ingested, and depends on the person who ingested the drug.

Essentially, the drug gets attached to the opiate receptors in the brain and the Narcan moves the drug off of the receptors and that stops the physiologic response of depressing the respiratory system and slowing down the cardiovascular system, according to Regaisses.

“It’s sort of like musical chairs.” Regaisses said. ‘You’re sitting in my chair,’ so the drug cannot attach to the opiate receptor so it can’t actually do its work.

Although Wydra said that Narcan will work every time, it might take a couple sprays to fully revive someone. It might take two or three or even more sprays.

“Sometimes one spray will bring a person back, but not all the way,” he said.

Although, as far as Hally knows, Public Safety has not seen any opioid overdose cases on campus, but thinks it is crucial for campus public safety to be trained and equipped as well as Hamden police because oftentimes public safety gets to the scene first.

“Our officers are the first responders on campus,” he said. “Hamden Police doesn’t come to medical calls and our guys get to scenes a couple minutes before them anyway so having that training and being able to administer the spray quicker will be able to save a life.”

The Mayor of Hamden, Curt Leng, is advocating for this substance to be deployed at other town buildings because at any moment anyone could have a drug overdose.

“It takes some time for first responders to get to the scene and regular people can deliver Narcan,” Wydra said.

Connecticut and legislature in Hartford have dealt with this epidemic very seriously as well. In the last three or four years there have been regulation changes including the Good Samaritan Law that allows anyone to deliver Narcan.

“The crisis is growing, we want to be proactive for our students and our visitors,” Hally said.