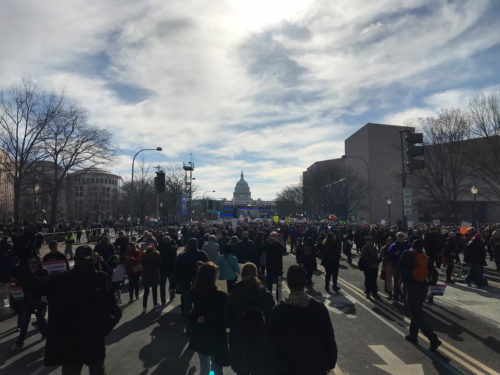 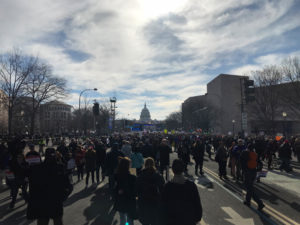 If you’ve been paying attention to the news even a little this month, you’d know that this past Saturday, March 24th cities around the globe participated in the March for Lives, a protest in support of gun control.

I’m a junior at Quinnipiac, spending a semester in Washington D.C. I had the opportunity to cover the national school walk-out for work on March 14, one month after the Parkland school shooting, which left 17 dead and cover the March for Lives for social media. The national school walk-out and the March for our Lives are two movements which came after the Parkland shooting

News outlets covered the who, what and where leading up to the March.

D.C. would be the hub—and expected to have the largest turnout of protestors. Locals offered up beds for marchers after hotels, Airbnb’s, etc. were all booked for the weekend. Lyft offered a limited number of free rides to the march to people who signed up ahead of time and politicians in Maryland purchased metro cards for students to use to get to D.C.

One high school student Marlena Tyldesley from Maryland, made stickers with years 2018 through 2022, to symbolize when high school students can vote. T-shirts and hats were made with the logo—a white background with blue and black lettering writing out March for our Lives, beside four stick figures. Attendees crafted signs with catchy slogans—some of my favorites, “silence is violence,” “school zones are not war zones,” and “thoughts and prayers don’t save schools.”

I charged my phone, my camera and my portable charger. I prepared to face a crowd larger than I could even imagine. 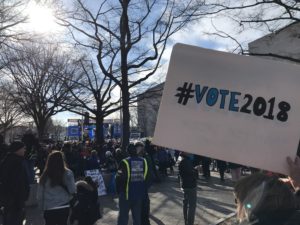 [/media-credit]I took the metro to the march and left around 8:30 a.m. I got off at Gallery Place and march volunteers (they were easy to spot in their bright green shirts) waited outside the station and directed marchers to the starting point. By 9 a.m. there were already plenty of people filing the street and a third of the blocked off area in front of the stage was already tightly packed with people.

Police lined the streets and blocked off roads. I’ve never seen so many law enforcement officers and vehicles down one road—but I’m glad they were there and I felt much safer.

The stage, which was set up on Pennsylvania Ave and framed The Capitol, was the size of any normal concert stage. Ariana Grande, Miley Cyrus and Jennifer Hudson were just some of the performers, as well as many of the student survivors—now activists from the Parkland.

I stood with the crowd from several different spots and the energy reached its peak at noon when the event began and the speakers and performances took the stage—fueling the crowd with inspiration and hope. But it didn’t feel like a concert. There were cheers, but they weren’t like the wild screams you’d hear at an Ariana Grande concert. Instead, these cheers carried emotion and for not one second did anyone forget what they were there for.

A lot of people are looking to the Parkland students for answers—they started this movement, didn’t they?

One of them, Emma Gonzalez, who spoke at the march and led a six minute and 20 second moment of silence to signify the amount of time it took for the gunman to kill her classmates, was interviewed by MSNBC at the march. I watched the interview on snapchat news and something Gonzalez said really resonated with. Throughout the day, I heard so many people around me talk about the Parkland students the same way they talked about the other celebrities around them on stage.

But these teenagers aren’t celebrities, they’re kids with a lot of Twitter followers and a whole world looking to them to solve this crisis.

Gonzalez shook her head and said “I am not a hero,” she’s just a student who wants to see change.

We can’t predict what’ll come out of this movement, but we can fight for what we believe in because that’s the beauty of living in the United States, we march the streets of our country’s capitol, directing chants like ‘no more silence, end gun violence,’ to the people who run our government, in protest for what we believe in.