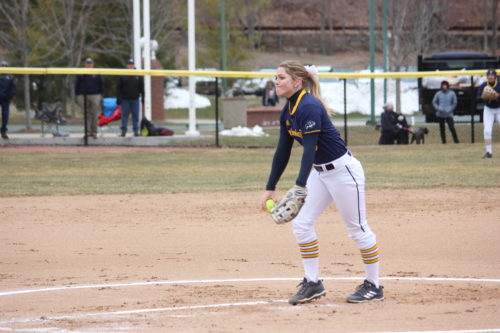 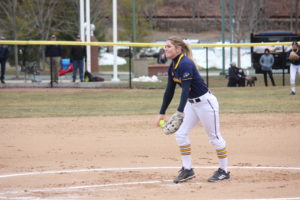 [/media-credit]Offense was an issue for the Quinnipiac softball team, as it battled against the UMass Lowell Riverhawks on Sunday afternoon in a doubleheader matchup. Despite the lack of offense, the Bobcats (10-16) were able to get the victory 2-1 in the first game, before the Riverhawks (6-16) dominated the second game and won 9-0.

In the first game, it was a pitcher’s duel between Quinnipiac senior Casey Herzog and UMass Lowell junior Kaysee Talcik. Both pitchers held their opponent scoreless through four innings, before UMass Lowell freshman catcher Sara Siteman blasted a solo home run in the fifth inning off Herzog, the first of her collegiate career.

However, in the bottom of the sixth inning, with two outs and two runners on, Quinnipiac senior outfielder Keilani Finley was able to smack a double over the shortstop, scoring both runners and giving Quinnipiac a 2-1 lead.

The Riverhawks did make it interesting at the end. After an error by Quinnipiac sophomore shortstop Rachel Marchuk, UMass Lowell had the bases loaded, with the tying run only 90 feet away from scoring. But Herzog struck out sophomore infielder Casey Harding to make the final out and get her ninth win on the season.

“I really just wanted to make sure that those errors did not affect us,” Herzog said. “I knew that those are plays that we can easily make. I also just wanted to let my team know that we have this and no matter bases loaded or not, it’s only three outs that we need to get and eventually we got it.” 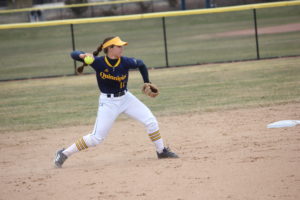 [/media-credit]The second game provided a much different tale. While Quinnipiac again struggled to score runs, the Riverhawks were able to take advantage of a couple of early errors and get a 9-0 win. Siteman, Harding, and senior outfielder Madison Alcorn each contributed two RBIs, while freshman pitcher Lovina Capria shut down the Bobcat bats, as she only gave up one hit and secured five strikeouts on her way to her sixth victory.

Quinnipiac junior pitcher Kendall Brundrett was chased in the third inning, after giving up six hits and nine runs (three earned). Bobcats freshman Haley Hulitt came in and was able to quiet the Riverhawks bats for the rest of the game, but the Bobcats had no answer to Capria.

“We’re still trying to iron out a few bugs, defensively and offensively,” Quinnipiac head coach Jill Karwoski said. “The object is to score more than the other team and we just did not do that in the second game.”

The bugs both offensively and defensively certainly showed. Combined for both games, Quinnipiac had only four hits and committed three errors.

“We’re trying to solidify that 2-3-4 spot [in the batting order],” Karwoski said. “And with our two players out [senior infielder Miranda Magana and junior infielder Rebecca Drake], we just haven’t been able to do that. I think this week, our goal is to get them healthy and find how do we break that pattern in the second game.”

Quinnipiac will welcome Brown University (6-10) on Wednesday, March 28 for a doubleheader starting at 2 p.m. in Hamden.