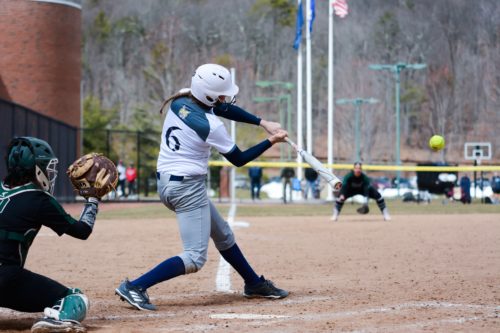 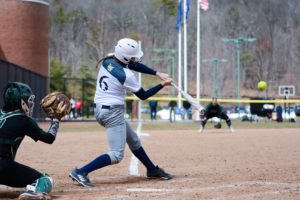 [/media-credit]Following a spell of 22 away games to start the season, the Quinnipiac softball team welcomed a doubleheader matchup on Saturday afternoon versus Wagner College at the Quinnipiac Softball Field. The Bobcats and the Seahawks split the series at one game a piece.

Quinnipiac took the first game, 6-5, behind senior pitcher Casey Herzog’s five strikeout effort. In the second game, the Seahawks had the upper hand, scoring five runs in the third inning and never letting go of the game, winning 10-7.

“This weekend setup opportunities for us to get some momentum rolling into our conference game [versus Rider] next Saturday,” Karwoski said. “With schools like Wagner and UMass Lowell around this week we have opportunities to get some of our bench players some opportunities… We are trying to find our strongest lineup going into MAAC play.”

The first game on the day was a quick affair in which Quinnipiac displayed its hitting power by breaking the ice in the third and fourth innings with four runs total, while Wagner was unable to buy a run. It was freshman  second base Brighid Douglas and sophomore shortstop Rachel Marchuk who led the way for the Bobcats, each notching two hits on three at bats and three RBIs between the two.

Although Casey Herzog took care of business in the first slate for the Bobcats, the Bobcats relied on a committee of Bobcat pitchers in the second game, with sophomore Abbey Long (2.0 IP), junior Kendrall Brundrett (4.0 IP), and freshman Haley Hulitt (1.0 IP) leading to a lesser result.

Despite the loss in the second game, Quinnipiac junior right fielder Erin Larsen displayed some explosive power when she hit one home run in the bottom of the third and nearly followed it up with another in the seventh inning, but it bounced of the outfield fence.

After the Larsen homer, the Bobcats found some momentum by way of a sacrifice bunt from junior outfielder Keilani Finley. Finley’s move put two runners in scoring position and then a string of hits by the Bobcats provided three scores of their own by the end of the third inning.

At that point the second bout was once again at the toe to toe score of 6-5, as it was in the first game.

However, Quinnipiac waned in Wagner’s fourth through sixth inning stretch, where the Seahawks played pristine softball on both sides of the ball. That mid game stretch ultimately kept Quinnipiac scoreless. 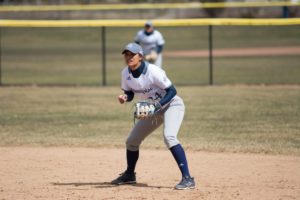 [/media-credit]Despite having offensive woes, in the sixth inning there was a particular defensive instance where the game, still in hand at 7-5, switched in decisive favor to the Seahawks.

Douglas committed an error on a base hit as the ball slipped past her glove. Wagner took advantage of the error by scoring two runs, making the score 9-5. Karwoski thought that the error was a not a fair representation of the Bobcat’s abilities, since she had been experimenting with the defensive lineup.

“A little bit of the [error] was because of a couple people playing out of position, so I think that will iron itself out. They are getting reps that in a position that they are not necessarily comfortable with, and that’s okay,” Karwoski said. “It’s not necessarily that we make an error, it’s that as long as it doesn’t snowball, and we wind up keeping our run total low. That’s been our problem in our second games that we are giving up way too many runs.”

Wagner’s top four batters, comprised of a duo of sophomores, second baseman Karen Prihoda and right fielder Zoe Bender, senior designated hitter Stephanie Alpin, and junior catcher Jessica Carlucci, were all instrumental in the ten runs scored in the second game. The aforementioned Seahawks made up the bulk of the team’s runs and hits that game with seven runs and nine hits between the foursome.

With just one win instead of two, the Bobcats still are still working on putting the final touches before conference play begins.

“Offensively I think we are settling in a little bit between our lead off, where we are at with our cleanup hitters, and [the] three, four, and five [positions], which has been nice [that] there hasn’t been much movement there. So that’s going to helpful going into our MAAC play,” Karwoski stated. “Defensively we have two players out right now, so there’s been some shift and movement on defense, so we hope to have that healthy.”

Fortunately for Quinnipiac, its next chance to improve on back-to-backs and cement their lineup comes in the doubleheader match on Sunday, March 25 vs. UMass Lowell.

“[The team] is coming out here with a little bit of a chip on their shoulder and we have to roll it into our second game too,” Karwoski concluded.