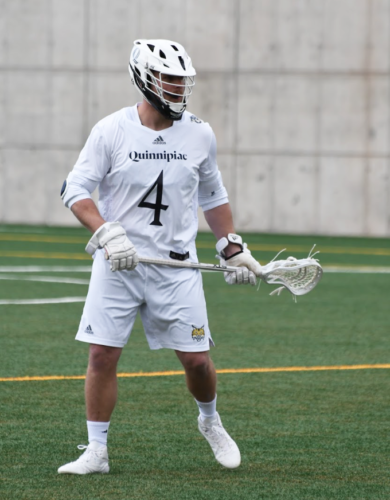 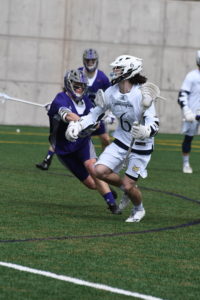 [/media-credit]On a breezy, early Spring Saturday in Hamden, the Quinnipiac men’s lacrosse team lost to Holy Cross in its final non-conference game of the season by a final score of 14-13.

“They’re a team that was 1-7, but we knew that we couldn’t take them lightly,” Quinnipiac freshman attack Jake Tomsik said. “We knew they were going to come out with everything that they got and their one win was against harvard so we knew it’s not like they’re a bad team, it’s just their record doesn’t show who they are. Losing the faceoffs, they won the GB (ground balls) battle by a lot I feel like. GBs (ground balls) win games, ground-balls are huge, I think that was our biggest downfall.”

The Bobcats (4-5) only won six out of 30 faceoffs on the day with senior midfielder Will Vitelli getting six wins in his 24 attempts. The Crusaders (2-7) won the ground-ball battle by more than double the Bobcats’ total. Leading the way was sophomore midfielder Dan O’Connell with 12. O’Connell also went 24-for-30 on faceoffs.

“Give them credit, they played really hard,” Quinnipiac head coach Eric Fekete said. “Defensively we have to lock it down, 14 goals against a team like this is too many, they’re averaging about five a game. Second game in a row our defensive performance struggled a little bit, but it’s a team game and we didn’t score enough to win either so we just have to clean up our game a little bit.”

Despite scoring 13 goals, this control of possession by the Crusaders helped to disrupt the Bobcats’ offense throughout the game.

“It was really just they had the ball for a lot of the game,” Tomsik said. “Then when we got on offense, you don’t want to feel rushed, but you’re down a couple goals and sometimes you have to rush and that can kind of trip teams up sometimes.”

Goals came in bunches today, out of the 12 goal scorers on the day, eight of them registered multi-goal performances and four had hat-tricks. For the Crusaders, senior attack Logan LeBlond registered five goals, all in the first half. However, the second half was a different story for LeBlond.

“I think we just picked up our defense a little bit,” Fekete said. “We’re not really that personnel oriented, it’s really conceptually; ‘what are they doing to us, where are we struggling, how are they attacking us and how can we defend it.’ I think the adjustment to shutting [LeBlond down] was just at the end of the game something to try to throw them off rhythm.” 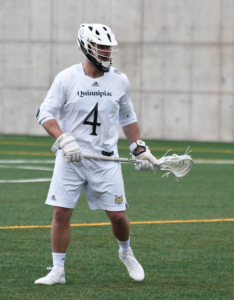 [/media-credit]Leading the way for the Bobcats was senior midfielder Brian Feldman. Feldman came into the afternoon hot, scoring eight goals and nine points in his last four games. He finished the day with his five-game point scoring streak alive after registering four goals.

“We work with him every day, he’s a really good team guy and he’s got a great shot,” Fekete said. “We try to get him the best matchup we can and he’s never afraid to pull the trigger. He’s a veteran goal scorer and that’s what he does really well and at the end of the game we wanted a play where we got the ball on his stick and want him to get the best shot.”

Feldman and the Bobcats take to the road for a Metro Atlantic Athletic Conference (MAAC) matchup at Detroit Mercy on Saturday, March 31. The Bobcats are headed right back to work to prepare for the game, according to Fekete.

“We just have to get back to business,” Fekete said. “Saturday’s another day and I’m fortunate this isn’t a league game. Even though these two games adversely affected us it doesn’t affect the big picture for us with the MAAC and we just have to be proactive and not reactive and get to business.”