Quinnipiac women’s basketball eliminated by No. 1 UConn in NCAA Tournament 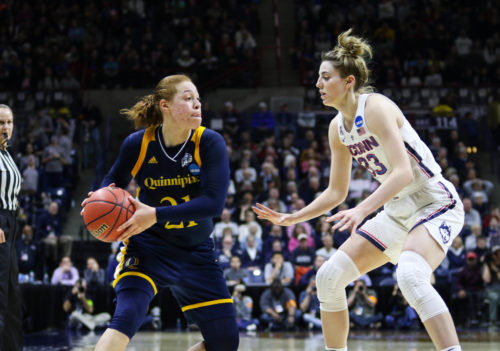 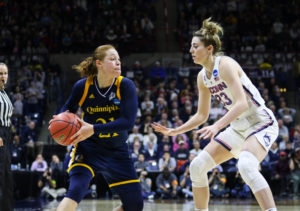 The No. 9 Quinnipiac women’s basketball team’s season came to an end on Monday night when the No. 1 overall seeded UConn Huskies defeated the Bobcats, 71-46, in the second round of the NCAA Tournament in Storrs, Connecticut.

While the Bobcats lost by 25, the score doesn’t reflect on how the Bobcats played for most of the game. Quinnipiac was able to limit the Huskies offense that broke tournament records on Saturday.

“Obviously we’re not thrilled with the result, but our execution and our effort was fantastic,” Quinnipiac head coach Tricia Fabbri said. “All game long, just loved this team how they implemented a different strategy, right from the beginning, in a day and a half…Heck of an effort. Heck of a team. So proud.”

“Well, we slowed the game down so that would tak way possession,” Fabbri said. “We still had 56 possession to UConn’s 44 with slowing the game down. We don’t turn the ball over, that’s a hallmark of this program…We knew we were going to give ourselves a chance if we shortened the game.”

Quinnipiac only committed seven turnovers all game. But the Bobcats weren’t able to make shots in the first half, shooting 26.9 percent from the field and just 1-for-12 from 3-point range. Pairing the poor shooting with the slow tempo gave Quinnipiac just 18 points at halftime.

The Huskies ended any hope of a Bobcat comeback in the final minutes of the third quarter as UConn went on a 13-4 run to give it a 54-31 going into the fourth quarter.

That basket led to a Quinnipiac timeout. But nothing came of it as junior forward Paula Strautmane fumbled a pass out of bounds on the ensuing possession. While McClure and Strautmane were able to get a bucket each, a 3-pointer made by junior forward Napheesa Collier concluded the run and gave the Huskies a 23-point lead going into the fourth quarter, their biggest lead of the game at that point. Collier led all scorers with 23 points.

The Bobcats weren’t able to cut the into the lead in the fourth quarter as the Huskies outscored them, 17-15, in the quarter.

Senior guard Carly Fabbri hit a 3-pointer with 2:57 left, which was the last of her career, as she was taken out of the game a minute later to an ovation from the Bobcat crowd that made it to Storrs.

“[UConn] is the mecca of women’s basketball,” Carly Fabbri said. “Growing up [in Connecticut], everyone talks about UConn. I was a Bobcat fan my entire life, but being here was really incredible. It was really the atmosphere that made it. We had a lot of QUinnipiac supporters in the Miami game, as well as a lot of UConn fans cheering for us. Even today, we had a good chunk of Quinnipiac fans out there. It was just the opportunity of a lifetime…that’s something I will remember the rest of my life.”

The end of Carly Fabbri’s career marks the end of Tricia’s Fabbri opportunity to coach her only daughter. And Tricia thought Carly had a cool experience to end her career. 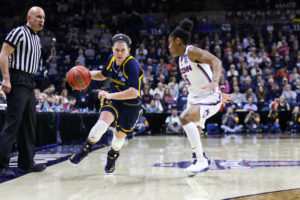 [/media-credit]“It was just really storybook an ending to have with your daughter,” Tricia Fabbri said. “To her to lead the team into the Sweet 16 and again this year with a No. 9 seed and get the win over Miami. For her to play in front of 8,500 people in a really competitive game. I was really excited for her to have this moment to close out her career. It was a lot of fun and I just hugged her and say ‘great job.’”

The Gampel Pavilion was nearly sold-out on Monday night. There was 8,957 fans in attendance, with a decent amount of Bobcat fans making the trip.

“You know, this was the pro of coming to Storrs when we saw Miami, and we saw UConn,” Tricia Fabbri said. “To have an opportunity when recruiting and building a program, to have this moment and to have a packed house and electric atmosphere. The bands, the atmosphere, feeling, just packed. To have that opportunity when it is more rare than common, in a big game, and to handle ourselves so well and compete with the dynasty on their home floor, this was the pro to being sent here to Connecticut.”

While Carly Fabbri’s leaves the Bobcat program, Quinnipiac gets back four starters and only loses Fabbri from Monday night’s active roster. Redshirt junior forward Jen Fay believes that tonight is just the start of what’s to come for the Quinnipiac program.

“That’s the goal to get back to the Sweet 16 and go even further,” Fay said. “I think we proved ourselves as a national powerhouse, pretty much, we’re playing against the best and that’s what we want.”