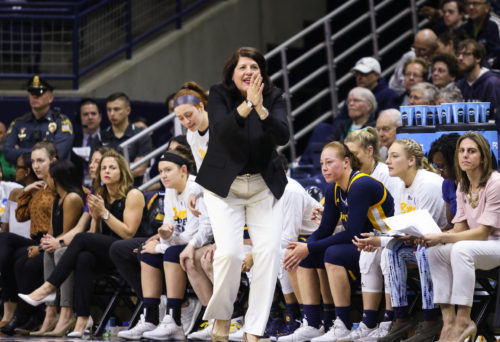 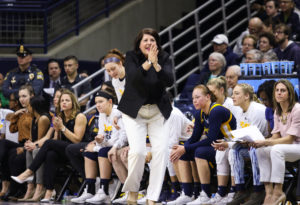 [/media-credit]It’s been 20 years since Quinnipiac head coach Tricia Fabbri and University of Connecticut head coach Geno Auriemma shared the same court. But when the two coaches meet on Monday night, they won’t be unfamiliar with each other.

Fabbri and Auriemma’s relationship goes farther back then when the Bobcats and Huskies met in 1998. It goes as far back as the late 1980s, when Fabbri donned a Fairfield Stags uniform as a player and Auriemma was only a few years into his now 33-year-long stint as the head coach of the Huskies.

And if you asked the two of them, the only thing that has changed about them is their success.

And when the Bobcats made the Cinderella run as a 12 seed in last year’s tournament, Auriemma showed his support for Quinnipiac by repping a Quinnipiac t-shirt at a press conference. At that press conference, Auriemma compared that team to his 1991 Huskies team, which was the first UConn team to ever make the Final Four.

That gesture meant a lot to Fabbri.

“Last year I left it off with saying his unveiling of our t-shirt was the exclamation on a great season,” Fabbri said. “…I liked the fact that he respected how our kids played down in Miami last year and that he went back to his 1991 team and just saw where it all started. He saw that in us and there was that respect.”

The fact that it came from someone like Auriemma added more sentiment as well.

“Geno has just transcended this game,” Fabbri said. “He and [former Tennessee head coach] Pat Summit in so many ways allowed this opportunity to happen and for the growth of the game to happen…His vision to not only make women’s basketball important but matter and create that rivalry with Tennessee has grown and evolved the game in just the past 15, 20 years.”

On Saturday, Quinnipiac won its third NCAA Tournament game in two years as it defeated the No. 9-seeded Miami Hurricanes, 86-72. The Bobcats success is no surprise to Auriemma, as he says that if you watch the program close enough, you would understand why they’ve had success as of late. 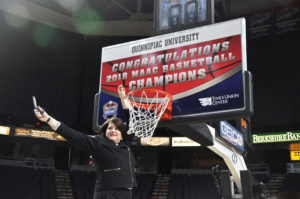 [/media-credit]“It’s no big shock that they’re playing [on Monday],” Auriemma said. “I just think that she’s found the right formula that works at Quinnipiac. It would work anywhere, but it works especially at a school like that, that attracts really good students and good players and she’s been able to establish an identity – this is who we are, we play hard, we’re competitive, we’re tough. And it doesn’t matter how good you are, if you don’t play well, you’re in trouble.”

When the Bobcats and Huskies met in 1998, Quinnipiac had just moved up to the Division-I level. UConn, on the other hand, was coming off an Elite Eight appearance the year prior and had won a national title in 1995.

The final score on that December day was 117-20, Huskies. That still remains the largest margin of victory in UConn program history.

But the Huskies did come close to matching that in their first round matchup against St. Francis, as they won 140-52. The Huskies broke a few single-game tournament point records, including the most points ever scored in a tournament game.

So, the odds are stacked against the Bobcats. But no matter what happens on Monday night, the respect between Fabbri and Auriemma will continue, as Auriemma loves the passion that Fabbri brings to the game.

“I said last year, it’s not very becoming for a Catholic girl to swear like she does on camera and she said ‘Don’t ever talk to me about that, I’ve seen you on camera,’” Auriemma said. “She’s a really tough individual. There’s no nonsense about her, no playing games, no sugar coating. She tells you ‘This is how I feel’ and she has the respect of her players. What’s different about her is she’s not afraid to coach her players and she get players that want to be coached. Too many times, coaches tiptoe around stuff and she doesn’t do that. That’s why her team plays with the kind of attitude they do, because she embodies that. I love that about her.”