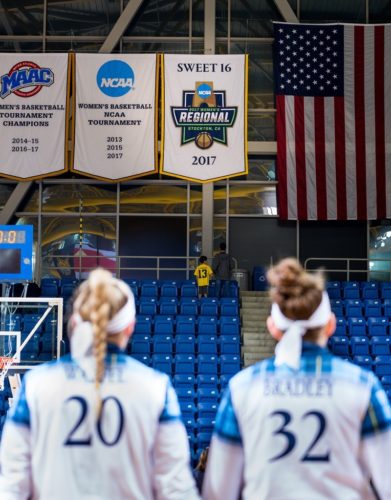 Aretha Franklin’s hit song “Respect” should have played when the Quinnipiac women’s basketball team found out what the NCAA Tournament selection committee had in store for it on Monday.

To add to the fact that it’s the highest seed in the program’s history, it also came as a shocker. ESPN’s bracketology had the Bobcats as either an 11 or 12 seed in the weeks and leading up to Selection Monday.

With the committee’s decision to give Quinnipiac a nine seed, Quinnipiac head coach Tricia Fabbri said that her program is getting respect.

“The seed says it all,” Fabbri said.

The high seeding, relatively speaking, was only half of what made Monday a great day for the program. Quinnipiac also found out that it would get to play its first game (and possibly the second, if it makes it that far) in Storrs, Connecticut, which is just an hour-long drive from its home in Hamden.

“It’s fantastic,” Fabbri said. “We get to stay home, go right up the road and get our fans traveling up there. It’s incredible to be home. We’ve traveled so much in these tournaments the last three years that we’ve been in the NCAA (Tournament). To be able to stay home, go up to Storrs, hoping that we get a lot of double-dipping in fans with UConn fans that were really excited for what the Bobcats were able to do. Hopefully they’re bringing their voices up they’re bringing their voices and supporting the Bobcats on Saturday.”

And if the Bobcats didn’t already have enough of a home court advantage, they will face the No. 8 seed Miami Hurricanes, who will need their fans to travel nearly 1,500 miles north just days after a Nor’easter hit the region.

The Hurricanes are also a favorable opponent for the Bobcats as they defeated the Canes in Miami just last season to advance to the Sweet 16.

So, why is Quinnipiac getting so much respect?

If you asked Quinnipiac head coach Tricia Fabbri, she would tell you that the team’s whole body of work got them to where it will be playing this weekend.

“The committee rewarded us for our body of work all season long,” Fabbri said. “Especially with what we did in the non-conference and what we were able to do in the conference. So, that was really incredible to see (getting the nine seed).”

The Bobcats started their season out with as tough of a schedule as any. Even though they may have only gone 6-5 in non-conference play, the Bobcats faced four power conference teams (all away from home) and took on seven teams that made this year’s tournament, going 3-4 against those teams.

The strong non-conference schedule helped Quinnipiac by the time conference play began as it went 18-0 in conference play, defeating opponents by an average of 22.1 points per game.

In the MAAC Tournament, the Bobcats easily won their first two games, defeating Monmouth, 83-44 and Rider, 82-62. In the championship game, Quinnipiac knocked off Marist, 67-58, to win its third MAAC Tournament title in four seasons.

That whole body of work may also include what the Bobcats did last season. Now, none of us were in the selection committee’s room when it made the decision to give the Bobcats a nine seed, but it wouldn’t be a shocker if the Bobcats run to the Sweet 16 last year played a role in the committee’s decision.

In the two games Quinnipiac won in the 2017 tournament, it defeated the No. 5 seeded Marquette Golden Eagles, who had won the Big East Tournament just a week prior, and of course defeated the then-No.4 seeded Hurricanes.

If the Bobcats repeat what happened in the second round of last year’s tournament on Saturday, they have the opportunity to earn more respect.

Not only would a win prove that last year just wasn’t a “good year,” but it would show that the Bobcats can beat some of the best teams in the country.

“I think it will work to our advantage,” senior guard Carly Fabbri said on the upcoming rematch against Miami. “I think they’re going to want a little bit of revenge, having ended their season last year…we’re familiar with their personnel and how they play so I think it will be a fun matchup.

But what about the best team?

That’s right, if Quinnipiac beats Miami, it will almost certainly face the No. 1 UConn Huskies, who haven’t lost a game this season and have won four of the last five national championships, in the second round.

A win wouldn’t be expected of course, but the Bobcats could garner more respect if they make the game a competitive battle throughout. At the end of last season, coach Fabbri said that she wanted to see the program get to the Final Four in the next four years. The opportunity of facing UConn can expedite that process as a win would bring them to the Sweet 16 or a close game would go even further in giving the program more respect in terms of seeding in the future.

Tricia Fabbri also realized how important a game between Quinnipiac and UConn could be for Connecticut.

“I would imagine that to be one fantastic atmosphere,” Tricia Fabbri said. “Based on what has able to happen last year in the tournament, great basketball in the state of Connecticut, that would be one heck of a great, fun atmosphere game to be apart of, if we can make it to see the second round.”

In her song “Respect,” Franklin sings “Find out what [respect] means to me.”

Well, the Quinnipiac women’s basketball team found out that its earned all the respect its received as a top-tier mid-major program, but the Bobcats have the opportunity to earn more respect as one of the nation’s top women’s basketball programs in the upcoming NCAA Tournament.