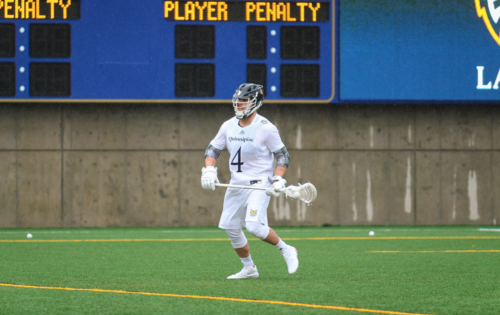 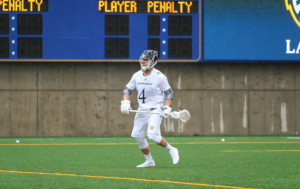 [/media-credit]When senior midfielder Brian Feldman fired a shot past Fairfield goaltender Sean McKee last Tuesday, it may not have meant much in a game where his team was down 8-1. But that shot engraved Feldman into Quinnipiac men’s lacrosse history.

The goal marked the 100th of Feldman’s career, making him the fourth Bobcat to ever achieve that feat. He joins a talented group of players that include twin brothers Mike and Joe Baglio (’02), and Alan LoGuidice (‘01).

“It felt pretty good,” Feldman said. “I assume it felt good for a lot of people. I looked at it as just another goal. But it was a pretty cool feeling.”

“I didn’t really think about it that much,” Feldman said. “I didn’t want it to interfere with how we played. I’m more worried about the team instead of myself. I didn’t want to be that selfish guy to go out there and just shoot the ball. I just played how I would have played if I was at 50 goals.”

While it may not have been on Feldman’s mind, it certainly was at least in the back of the mind of his coaches and his teammates.

“We’ve been waiting for it for a while,” Quinnipiac head coach Eric Fekete said. “The poor guy has been a bit snakebit. But he’s earned every one of the goals, so we were happy that we could move along and get passed it. The whole team wanted him to reach that milestone. Everyone was pretty excited for him and it was a great goal too.”

For the Canandaigua, New York native, the triple-digit mark just further showcases the talent he possesses. Feldman has been a dominant force for the Bobcats throughout his career at Quinnipiac.

In his first three years, Feldman led the Bobcats in goals each season, starting all the way back in his freshman campaign when he tallied 29 goals and was named a member of the MAAC All-Rookie team. He followed that up with a 36-goal sophomore season and 30 goals the year after, good for First-Team All-MAAC and Second-Team All-MAAC honors, respectively.

“I came here freshman year just fighting to get on the field,” Feldman said. “I ended up getting on the field and starting for three years, and this year has been a little harder, coming in as a midfielder. I never really was looking at it like I was going to be in the top four of scoring in the history of the school, but it kind of just happened.”

The switch to midfielder for Feldman happened midway through his junior year. Riding a streak of 20 games with a goal, Fekete decided to make the change in position from attack to midfielder for Feldman. Despite breaking that streak in the very next game, it is a decision that Fekete has stood by and Feldman is playing his senior year as a middie. 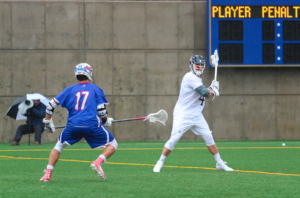 [/media-credit]“We wanted to get him a better matchup,” Fekete said. “He’s so physically imposing, we felt like last year he and [junior midfielder] Foster [Cuomo] were kind of playing in the same place. He just has a better range from the outside, he’s a better shooter. He has more velocity on his shot and we just felt that it was an advantage for us putting him into that role.”

It’s a role that took some adjusting for Feldman. But it’s a place where he’s adapted and it’s working well for him.

“Playing midfielder, you got to go down and play some D, which I struggled with at first” Feldman said. “I kind of got the hang of it and now I don’t really mind going down there and laying some body or playing some defense.”

The switch Fekete made not only saw an impact on Feldman’s game, but a positive change for the team as well.

“It’s played a big impact,” Fekete said. “I think you see less on the scoring column of what Brian contributes now with the change. When we score a lot, a lot of it is Brian’s presence on the field.”

Feldman and his presence is hard to miss on the field. Standing at 6-foot 2-inches and 200 pounds, he provides one of the more imposing figures on the field. The towering middie has scored seven goals this year through six games, good for fifth on the team.

“He’s a gladiator,” Fekete said. “He’s really competitive, plays really hard. He’s a goalscorer by trade, it’s just a natural thing for him. He knows his role is to score on this team and he cares for his teammates.”

That care for his team has been clear in Fekete’s eyes. And despite the individual accomplishment, Feldman was quick to give his teammates the shoutout they deserved.

“I wouldn’t have been able to do it without the guys I’ve played with since freshman year,” Feldman said. “I can’t take credit for everybody that helped me through it and able to get me to [100 goals].”

After missing out on the playoffs last season, the Bobcats are eyeing to get back to the postseason, just like they did in 2016 when Feldman’s two goals and an assist in the championship game led Quinnipiac to a MAAC title. The Bobcats will need more goals out of Feldman to reach that point, but it’s a task Fekete knows his star midfielder is up for.

“He wants to get back to the playoffs and get back to the championship,” Fekete said. “He knows his role is a big part of that. When we moved his role, he never really balked and he’s a team guy all the way. As much as his points reflect his success, he’s a team guy first and I think he’s contribution to the team is the number one thing.”