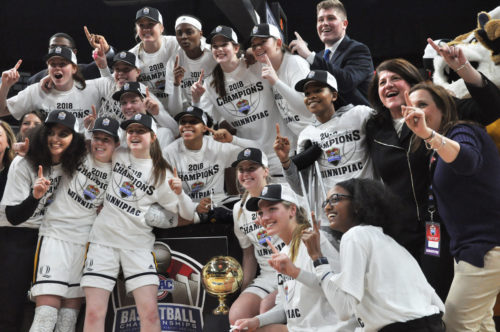 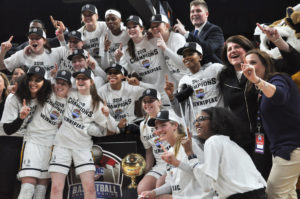 “I thought it was a great game, a great matchup,” Quinnipiac head coach Tricia Fabbri said. “Marist has had such a good year this year and our two previous matchups were single-digit, overtime, double overtime (games) and I think on the women’s side (of the bracket) the matchup that everyone was looking forward to. They got a great game.”

The win completes a perfect season for the Bobcats in conference as they went 21-0 in the MAAC to give them their first back-to-back conference tournament championships in school history.

“I’m excited that we were able to do something that we haven’t done before in going back-to-back,” Fabbri said. “We’ve been really good in the odd years, so now in [2018] we break through in an even year.”

As for what happened in the game itself, the Red Foxes went toe-to-toe with the Bobcats for the first 36 minutes of the game, even leading in at halftime, 35-34. But with 3:42 remaining, with the Bobcats leading 55-53, senior guard Carly Fabbri knocked down a 3-pointer to put the Bobcats up by five.

After Red Foxes junior guard Maura Fitzpatrick made a pair of free throws on the next Marist possession, junior redshirt guard Jen Fay knocked down a 3-pointer to put the Bobcats up 61-55 with 2:56 remaining and the Red Foxes never came within a single score for the rest of the game.

After scoring just four points and shooting 2-for-8 from the field in the first half, Fay’s 3-pointer capped off a strong second half to give her a game-high of 23 points and 10 rebounds to secure her the MAAC Tournament’s Most Outstanding Player.

“[Quinnipiac associate head coach Mountain MacGillivray] said in practice that if you miss the first 10 shots, you’re always going to shoot the 11th one,” Fay said. “Even at halftime he told me don’t stop shooting and I said, ‘I won’t’ and finally some went down.”

However, Fay was close to not playing. She revealed that she had a left knee injury and talked to coach Fabbri about the possibility of not playing. One team official even said that she was in tears from the pain.

“Yesterday in the game, she came down just awkwardly,” Tricia Fabbri said. “She’s had some pain in the back of her leg that she’s been working out over the last couple of weeks. So, besides Jen being named MVP, the real MVPs were Dr. Wong, who traveled with us, Becky Miller, our athletic trainer, and our student trainer, Kelsey McDonough who did a fantastic job on working on Jen yesterday after the game and into this morning. We weren’t sure even in shootaround (if she was going to play).”

But that wasn’t going to stop Fay from playing for something she had been working on all season.

“I woke up, I wasn’t really feeling great and my mind wasn’t in it,” Fay said. “My teammates were supporting me and it’s the championship game, it would take a lot for me not to play. So, I was just going to go out there and once the adrenaline started pumping and started sweating a little bit, there was no way I was coming out.” 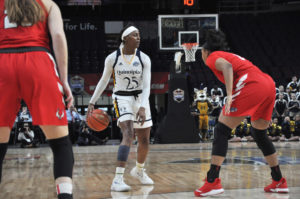 [/media-credit]Fay wasn’t the only player that the Quinnipiac training staff had to work on on Monday. Junior forward Aryn McClure left the game midway through the third quarter with an apparent leg injury before checking back in later in the quarter and hurting her right leg when she went up for a rebound. McClure laid on the floor for several moments to a silent arena before being helped off by her head coach and a team trainer to the locker room.

But McClure came back in late in the third quarter. Coach Fabbri revealed that McClure had cramps. She finished the game with seven points and nine rebounds.

McClure was also named to the All-MAAC Tournament team along with Carly Fabbri.

Of course, the most significant part of the win is that the Bobcats will now get to play in the NCAA Tournament for the second straight season and the fourth time in program history. In 2017, Quinnipiac gained national spotlight during the tournament as it advanced to the Sweet 16 before being knocked off by eventual champion South Carolina.

The Bobcats don’t know their next opponent yet, as the NCAA Tournament selection show doesn’t take place until Monday, March 12. Even with the Bobcats projected as a lower seed by bracketologists, Carly Fabbri is ready for whatever the selection committee give them.

“Hopefully our (opponents) will be a little scared,” Carly Fabbri said. “We love being the underdog in that situation, but we’re confident in whoever we see. We’re going to have a fair chance at winning that game…Having been there and won there, I think that’s really going to work to our advantage. We’ve been working for this since last April when it all came to an end.”