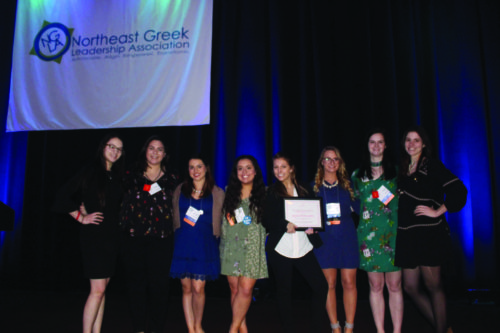 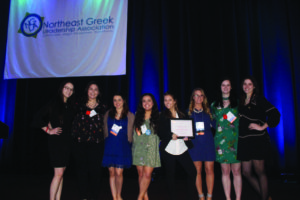 “I was so excited when they announced Quinnipiac had won,” Panhellenic Vice President of Scholarship Cassandra Hardy said. “As a sister of Gamma Phi Beta, I was especially excited because my sorority was recognizing the past years work of our Panhellenic Council. It was great to see my sorority giving back to Greek life on our campus.”

The “Impact” award included a $250 grant and a plaque with “Gamma Phi Beta International Sorority College Panhellenic Award Presented to Quinnipiac University Panhellenic” written on it.

President of Gamma Phi Beta at QU Katlyn Carr says that the organization’s headquarters recognizes a Panhellenic community every year, even at schools that don’t have a Gamma Phi Beta chapter.

“I was lucky enough to be at International Headquarters when we received this news and it was such an honor,” Carr said. “Our Panhellenic Council is doing wonderful work and deserves to be recognized for it.”

Quinnipiac’s Panhellenic Council is made up of individuals from different sororities on campus responsible for making sure all the women in Greek life are upholding the expected standards and are helping to organize events and programs that bring the QU community together, according to the 2017 Panhellenic President Samantha Eisenberg.

“From holding biweekly Panhellenic meetings open to the entire Panhellenic community, to our monthly scholarship competitions, to events that bring women together, we focus on the betterment of women in our community and building relationships with women of different organizations,” Eisenberg said.

Over 1,200 students from 107 schools attended the NGLA conference, according to the NGLA Conference Committee. Gamma Phi Beta specifically recognized QU’s Panhellenic Council for its “Panhellenic Pride Week” that took place from Oct. 30 to Nov. 2 2017.

“Panhellenic Pride Week” was organized by Eisenberg, and she said the purpose was to group together different chapters on campus and to take part in programs to encourage working together towards a common goal.

“I worked super hard on the application for the award – and the program itself and to know that we actually won made me feel like my hard work paid off and made me feel like our program truly made an impact to the community,” Eisenberg said.

Eisenberg mentioned the application process took a while to complete. It consisted of a description of the program, its goals, participants and a letter of recommendation—to name a few.

“It wasn’t that it was so important that we won, but it just made it feel more real and that the program really did make a difference,” Eisenberg said. “Since those who choose the award weren’t there (or) don’t go to Quinnipiac, it just made me feel really good because they were able to see the difference it made without physically seeing it.”

Panhellenic President for 2018 Emma Horn attended the NGLA conference and said she was overjoyed that Quinnipiac’s council had won that she stepped out of the award ceremony early to FaceTime Eisenberg to tell her the good news.

“My reaction was immediate tears as she is someone I have admired and loved since the moment I met her,” Horn said. “She transitioned me into my role as president and made it very clear (that) ‘Panhellenic Pride Week’ was her child. She put in endless efforts to make the week flawless.”

“Panhellenic Pride Week” consisted of many programs including making blankets for the pediatric unit of Yale-New Haven Hospital and food trucks on the quad to raise money for Circle of Sisterhood (the National Panhellenic Council philanthropy) – along with many other efforts.

One of the programs during the week was Penny Wars where students tabled in the Student Center working together to be the group who had the most donated pennies and the winners got $100 towards a charity of their choice, according to Eisenberg. Proceeds for this program also went to Circle of Sisterhood.

“The goal of tabling was to have one person of each organization there at the same time so women would meet people outside of their chapter,” Eisenberg said.

Over the entire “Panhellenic Pride Week,” the Panhellenic community raised over $1600, according to Eisenberg.

“Throughout my term I knew I wanted to somehow leave a legacy in the Greek community and this program was the way to do it,” Eisenberg said.