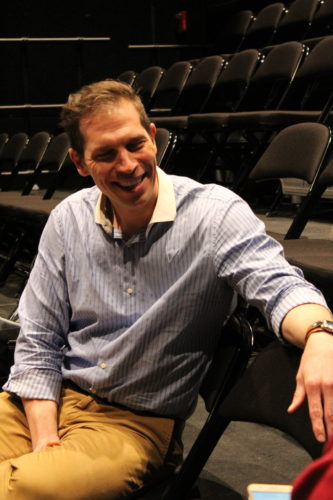 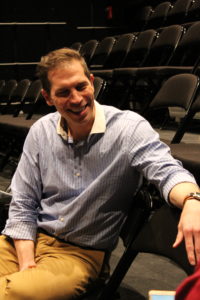 [/media-credit]Professor Tom Schwans entered stage left into the world of theater before he was in high school. Schwans was introduced to the world of theatre by his sister. While she preparing for her role as the high school teacher in “Up The Down Staircase,” a young Schwans would practice as a character that he would soon yearn to play.

“I don’t remember his name, but he was a greaser-punk,” Schwans said. “It took place in the 60s. It was very much like ‘Grease.’ Everyone wants to do ‘Grease.’ And I got to help her learn her lines and I really wanted to play this like Danny Zuko type character.”

When he finally started high school, all he wanted to do was play basketball. But when his English teacher, who was also the theater director, approached him and suggested he audition for the upcoming school play, Schwans figured “why not.” That year he landed his first role as Peter Van Pels in “The Diary of Anne Frank.”

The feeling of performing live is very real and in the moment, according to Schwans. The process of putting on a show either works or it doesn’t.

“Onstage you rehearse a lot and and you go through it and you have a process,” Schwans said. “The very least it’s the week and it’s everybody in the same room, working together to make this thing happen and then you step out [onto the stage] and you’re in front of an audience and you go and it’s either happening or it’s not.”

Unlike Hollywood, where there’s multiple takes and editing, the theatre does not give an actor a second chance to get it right. It’s do or die. Despite Schwans’ talents, that pressure weighs on him.

“There is a moment where I stand backstage and I can’t remember my first line and ask myself, ‘What if I don’t go out there?” Schwans revealed.  “If backstage is far enough away from the actual stage, I’m usually pacing and making sounds and just trying to breathe. One of the things I teach in my ‘Acting I’ class [DR160] is that we’re afraid but we do it anyway. What I do is I take a deep breath in and I walk out on stage and I pray to God.”

One quote that helps him through the stage fright is by Ray Bradbury, an author and screenwriter, reading, “First you jump off the cliff and build your wings on the way down.”

On top of the fear of stepping out on to the stage, is the fear that follows an actor off stage. The fear of failure.

Schwans explained that the hardest part about being an actor is the uncertainty, but that uncertainty and the thrill of it all is also satisfying.

Rejection is a large part of acting. It is an inevitable aspect of life that everyone tries to avoid. But for an actor, they live in a bubble filled with the constant possibility of rejection. That disappointment can often be earth shattering.

“Actors walk into a room for an audition and say ‘I have this problem I need this job,’” Schwans explained. “‘You will cast me and you will solve all my problems.’ But in reality, you don’t actually have a problem. The people on the other side of the table have a problem. They have a play and they need to cast. They already put a lot of money into the fact and sold tickets usually to a play they don’t even have yet.” 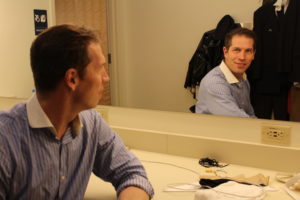 [/media-credit]Schwans went on to explain just why he remains so confident in audition situations.

In addition to teaching at Quinnipiac, professor Schwans currently runs a theatre company, called The Guerrilla Shakespeare Project, that he formed during his time at Brown University. His company now runs out of New York City, where he currently resides.

Schwans is also an adjunct professor at Fairfield University. Right now, he is directing a play at Fairfield called “The Spitfire Grill,” a musical following a woman’s reimmersion into society after being released from prison. “The Spitfire Grill” currently stands as Schwans’ favorite play. He also directed the screenplay “Doubt” at Quinnipiac last fall.

He has become an influential member of the Quinnipiac family. He is involved with the programming of the theater department, he teaches in the acting and directing curriculum and he also directs for the MainStage season, according to the theatre program director, Kevin Daly.

“He’s a talented actor in his own right with an immense amount of professional experience that he generously shares with our students,” Daly said. “He’s a demanding professor that really challenges his students to be their best and I can see how much our students respect him and enjoy working with him. The strength of our program is the people we work with— and he’s a big part of that.”

When he began teaching at Quinnipiac in 2009, he found himself having to break his students out of their molds. His students were set on getting everything “right,” he said.

“What’s interesting about the Quinnipiac student is that they are very goal oriented, very set in ‘how to do something right,’” Schwans said. “And as an artist… there is no ‘right’ because we’re creating art, and there is sort of an exploration and you can’t look at something at the end and go, ‘Oh I can do that,’ Well sure, because someone already did that. You can mimic that, but you can’t do it.”

One tactic he came up with to break his students out of that one track mindset is his singing policy. If you arrive late to class, he requires you sing the reason you are late in front of the entire class. By doing this, his students are forced out of their comfort zone, where there is no right or wrong.

“It’s an exercise based on opening yourself up to the possibilities of being actually personal and real in a moment,” Schwans said. “What college really is is, ‘I want the best possible outcome for the least amount of effort.’ Most students realize quickly that they don’t have to be smart to get A’s, they just have to please the professor. So you become good at playing the game of being a student.”

Once the students break that barrier, where they feel like they can’t do it, the singing becomes easier.

“So the singing policy is really getting up in a realm of where you can’t do it or that there’s a right way to do it and what it turns into is an expression of you getting to say what you really want to say.”

When he’s not in a classroom, he is in the theatre. This summer, he will be involved a play called the “The Tin Woman,” which follows a woman who will undergo a heart transplant, a take on the well known Tin Man from “The Wizard of Oz.” He also works with medical students, often playing psych patients in simulated scenarios. Right now though, he is devoted to the Fairfield production of “The SpitFire Grill.”

“I’m immersed in it,” Schwans said. “That’s one of the things that happens. You eat, breathe, sleep all of it and if you don’t love it when you’re doing it it’s torture.”