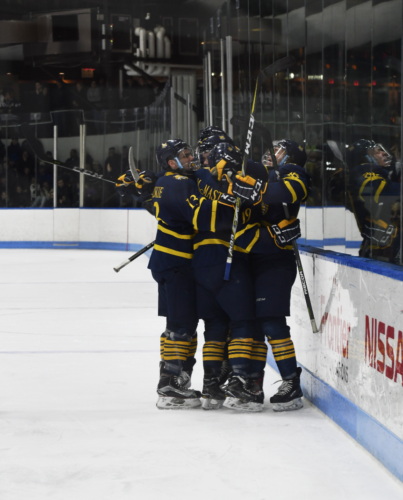 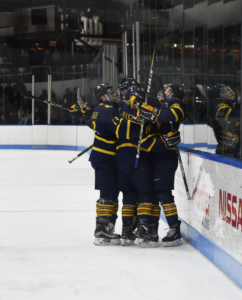 [/media-credit]The ECAC Hockey Tournament’s No. 9-seeded Quinnipiac men’s ice hockey team completed the weekend sweep over No. 8 seed Yale on the road after a 4-1 win on Saturday night.

Freshman goalie Keith Petruzzelli made 20 saves in his second consecutive start and the Bobcats accomplished their defensive goal of shutting down Yale’s (15-15-1) leading point-scorer Joe Snively, who was held to no shots on goal on the night.

“We were definitely keen on Snively,” Quinnipiac head coach Rand Pecknold said. “We wanted to make sure we were going to have layers with him and every time he beats a guy, there’s a second guy and if he beats him there’s a third. I thought we frustrated him and did a good job both nights.”

In the first period of play, the Bobcats heavily out-possessed Yale, controlling play in their offensive zone for the majority of the period. However, despite throwing 11 shots on net, Yale goalie Corbin Kaczperski was rock solid, stopping every shot he faced.

Quinnipiac’s offense continued its dominance into the second period, but began to find results at 4:11 on its second power play opportunity of the night.

At the tail end of the man-advantage, Tufto made a no-look, backhand pass from beneath the goal line to find a wide-open Chase Priskie, who made no mistake for his 11th goal of the season. 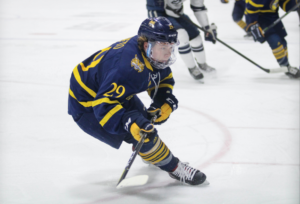 [/media-credit]Tufto’s 32nd assist of the season was one that came with a batch of program milestone as well.

“It’s nice,” Tufto said of his achievements. “When you have good teammates and good coaches who give you opportunities like that it helps to be successful.”

Seven minutes later, Tufto found the back of the net for a goal of his own. Senior forward Tanner MacMaster threaded the needle from one hash mark to the other, where Tufto snapped a shot past the blocker of Kaczperski for his ninth of the season and a 2-0 lead.

The Bobcats continued their commanding night midway through the third period when Rafferty danced his way around Yale defenseman Billy Sweezey, made a quick move on a partial breakaway and snuck a backhand shot past Kaczperski’s five-hole to make it a 3-0 game.

“I made a risky move to the middle and it worked out,” Rafferty said of his fourth goal of the season.

Brogan Rafferty finishes five-hole on a silky move. Quinnipiac faithful is loud at The Whale as the Bobcats lead Yale 3-0 with 9:17 left to play.#ECACHockey pic.twitter.com/1c6hKrzZcX

However, with Yale’s season on the line, the Bulldogs refused to go down without a fight. At 13:22, Yale forward Kevin O’Neil narrowed the Bobcats’ lead to 3-1 off a quick wrist shot from the top of the right circle.

But that was the rest of the even-strength scoring on the night.

The Bobcats stayed sound defensively, blocking eight shots in the third period before sophomore forward Alex Whelan scored his second empty-net goal in as many nights to solidify a 4-1 victory and series sweep over Yale.

“We knew coming in that it’s hard to end a team’s season and I think we were all hyped for it,” Tufto added. “We knew they were a little down, so we could jump on them early and when we did, we took over offensively.”

With the win, the Bobcats move on to the ECAC Hockey Quarterfinals, in which they will face one of either the No. 1 seed Cornell, No. 2 seed Union of No. 3 seed Clarkson on the road. Two other series (No. 5 Dartmouth vs. No. 12 St. Lawrence and No. 6 Colgate vs. No. 11 RPI) remain tied and will ultimately decide Quinnipiac’s fate for next weekend.

No matter who they end up playing, Pecknold insists that the team will be dialed in for the next round.

“In the end we’ve got to play who we’ve got to play,” Pecknold said. “So when you go on the road, if you want to put us somewhere else [or] in a hotel this weekend, we’ll be fine. Our guys are ready.”