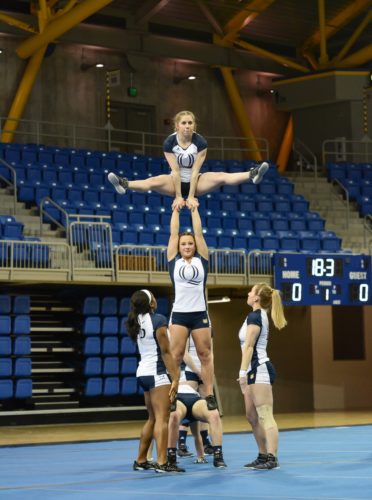 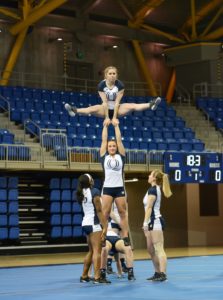 [/media-credit]The Quinnipiac acrobatics and tumbling team made it two wins in a row with a 284.01-254.635 win over King University on Saturday in Hamden.

“It felt great, felt like we had a little bit of a slow start just with energy and wasn’t sure where they were taking it because this team is just very very smart and they’re very very focus so I wasn’t sure,” Quinnipiac head coach Mary Ann Powers said. “It wasn’t quite the crowd as last time and i always coach them to know that when we are down a fanbase for whatever reason we have to be our own fans we have to play up to ourselves so they started picking up in the second half and it was great to see.”

The Bobcats (2-1) controlled the scoreboard for the entire meet and swept every event going a perfect six-for-six including the Team Event. The team only lost one heat on the day.

The Team Event saw the Bobcats winning by almost 15 points over the Tornado (0-3) and cracking 100 for the first time this season.

“I think going out there we had the confidence going into it and the excitement and that energy and i think we just put it all out on the mat,” senior top and captain Alyssa O’Connor said. “It was so energetic and it was so exciting.”

Coming into the meet, the Bobcats hadn’t scored more than 281 points in a meet since the 2015-16 season. After the meet, not only did they win their second game in a row surpassing 280-points, but they surpassed 281 as well.

I asked them for 281 today, it feels great,” Powers said. “It puts them right beside Baylor’s scores so it’s right where they wanted to be. It’s put us in a good place that 284 that was out of that team routine and that is where it’s hardest because all 24 of them are out there, more chance for errors than you’re going to see in an individual round and that’s the thing that they focused on for a real long time, I’m very proud of it.”

However, there was a scary moment during the second heat of the Toss Event. King University freshman base Kaylee Reese got hit in the face as the top was coming down and instantly fell to the ground.

“I don’t think they were unnerved as much as they felt bad for the opposing team,” Powers said. “That’s why I think when they did the team routine our team was standing there clapping…they were just being good sports I think.” 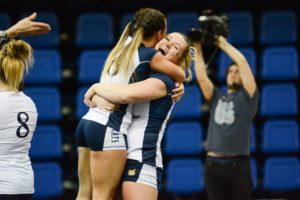 [/media-credit]Reese got up and walked off under her own power. She remained out for the remainder of the meet, but was standing on the sideline cheering on her team during their run at the Team Event.

“You have to almost talk yourself back up (after something like that),” O’Connor said. “I know that what the other team does doesn’t really affect us and impact us, but it was really sad to see her go down. It happens to everybody, but I’m happy that they were able to come back out there and kill it.”

The Bobcats take the mat next on Sunday, March 11 at Oregon University. Oregon owns a 2-1 record with their only loss coming against Baylor (4-0). Both teams scored over 280-points.

“I think it’s going to be a really close meet the whole time, we’ll definitely give them a run for their money,” senior base and captain Jenna Adams said. “We’re definitely looking to move up in those rankings and they’re definitely one that we could take down if we really focus and set our minds to it which I think we will.”