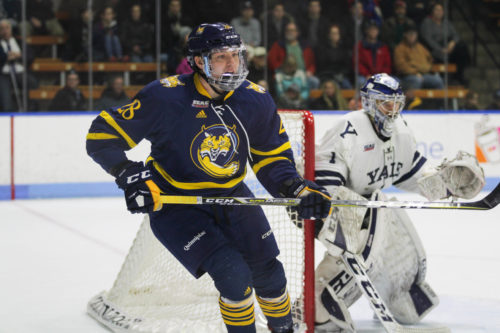 Following the Quinnipiac men’s ice hockey team’s 5-1 win in Game 1 of the ECAC Hockey First Round Series against Yale, I half-jokingly asked another reporter a pretty simple question prior to the postgame media scrum.

“When you woke up this morning, would you believe me if I told you Joe O’Connor would score a between-the-legs, playoff goal tonight?”

He laughed it off, regained some composure and then responded with a pretty simple answer. “No.”

Nor did anyone else, really.

At least, not in the postseason, or from a natural defenseman that is still being “converted” into a forward just nine games into his first Division I hockey season. 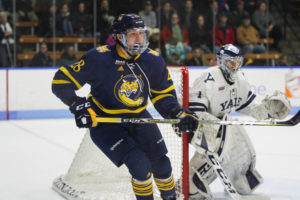 [/media-credit]But tonight, O’Connor became the spark for a Quinnipiac team that has struggled to find its offense on a game-to-game basis this season.

His highlight reel goal — in which he corralled senior forward Tanner MacMaster’s pass, took a shot from between his legs and sent it past Yale goalie Sam Tucker’s blocker — tied the game at 1 to gave the Bobcats much-needed jump early on in the second period.

“That was an awesome goal,” another defenseman-turned forward Kevin McKernan, who scored a goal of his own on Friday night, said.

Not only was the goal itself special, but it was the first time that O’Connor was able to contribute offensively in front of his family and friends as a Bobcat.

Born and raised in Hamden, O’Connor was seen rejoicing with a substantial amount of his not-so-far traveled fan base in “The Whale” after Quinnipiac’s 5-1 victory. While they were surely proud of his game, both he and his support probably didn’t realize he set a first in Quinnipiac men’s ice hockey history, too.

It was his second of the season and came just four games after he scored his first collegiate career goal on Feb. 10 against Brown.

“A couple more games [at forward] and I think I’ll be in full stride,” O’Connor said following the game in Brown.

He sure looked it on Friday night.

In addition to the goal, O’Connor generated a season-high three shots on goal in a bottom-six role. His physicality levels met the gritty tempo of this series and positively impacted Quinnipiac in that regard.

“He’s been in the lineup for a little while here, he’s getting better and better, so we’re happy with his progression,” Quinnipiac head coach Rand Pecknold said. “The goal was big-time. The stick between the legs, it’s some skill.”

O’Connor has come a long way since playing at both Hamden High School and Westminster Prep in Simsbury. Growing up he watched the Bobcats compete at their old home, the Northford Ice Pavilion, but now he possesses the ability to help write Quinnipiac’s own history books.

The Bobcats play Game 2 of the best-of-three ECAC Hockey Tournament First Round Series tonight at 7 p.m. in New Haven.

Disclaimer: O’Connor was unavailable to the media per the team, following the game.