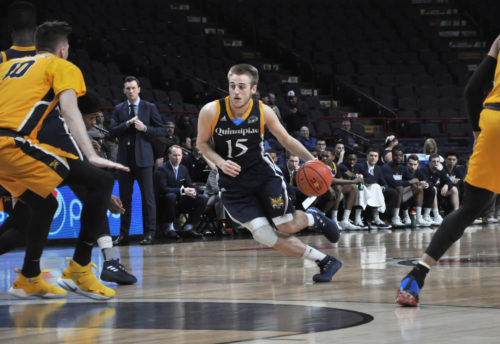 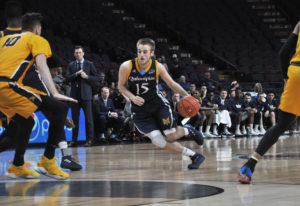 [/media-credit]It’s March 2, so naturally, the madness has already begun.

The No. 7 seed Quinnipiac men’s basketball team turned in a huge upset of No. 2 seed and co-MAAC Regular Season Champions Canisius, defeating the Griffs 72-69 at Times Union Center in Albany.

Upsets were the theme of the day, as No. 1 seeded Rider saw its season end at the hands of No. 9 seed Saint Peter’s earlier in the day.

For the Bobcats (12-20), it was freshman guard Rich Kelly’s layup in the final 10 seconds that helped them seal the victory.  Kelly, who sat most of the first half with two fouls, finished with 16 points and five assists on 7-for-11 shooting.

“Whatever [Quinnipiac head coach Baker Dunleavy] calls, I run,” Kelly said. “I was just hoping [Dunleavy] would call something for me and he did, so it worked out well.”

Canisius (21-11) was unable to slow down Kelly all night, which helped make Dunleavy’s decision with the game on the line a little bit easier.

“It was really similar to our game at Columbia where they had been really aggressively in all of their pick-and-roll coverages,” Dunleavy said. “[Canisius] was just really hesitant to bring another defender to [Kelly], so we just kind of ran the same play where we got him a layup at Columbia and to his credit he was really aggressive with it.”

Kelly wasn’t the only Bobcat to hit a big shot, as junior guard Aaron Robinson hit his second 3-pointer of the day with just 2:29 to play, and gave the Bobcats a 66-60 lead.

Quinnipiac had its hands full with Metro Atlantic Athletic Conference (MAAC) co-Player of the Year Jermaine Crumpton and First-Team All-MAAC selection Isaiah Reese, but was still able to come out with a win. Crumpton finished with 22 points, but left eight points at the free throw line as he shot just 8-for-16, including missing 2-of-2 with Canisius down 66-62.

“[Crumpton] is arguably the best player in the league and he can do so many different things,” Dunleavy said. “We wanted to be aggressive on him, we wanted to make him uncomfortable.  Throughout the game I thought sometimes we did that, sometimes we didn’t.”

Dunleavy stressed that the game plan was to limit the number of 3-pointers for Canisius, a team that shot 35.4 percent from behind the arc this season.

“I know we held them to five [3-pointers] and that was the thing we talked about going into this game,” Dunleavy said. “[We wanted to] make them drivers, make them rim finishers and our guys just did a tremendous job of detail to the scouting report.”

As has been the story all year, the Bobcats were in a close game, but as was the case in Thursday’s first round win over Siena, they made the plays down the stretch to win.

“I was really excited about the way our guys were able to handle [the stretch run],” Dunleavy said. “We got multiple stops down the stretch, and we just kept coming. We just kept defending with great poise, that’s what really got us through.” 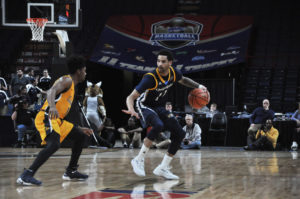 [/media-credit]Senior guard Cam Young, who finished with 17 points and a team-high 11 rebounds, echoed his coaches statements about the team’s execution with the game on the line.

“I think [playing in close games all season] prepared us well,” Young said. “At the end of the game I don’t think any of us were in unfamiliar territory, we were just thinking stay composed. If they were to make a shot we knew what we had to do next with out of bounds plays, so I think we were ready.”

The Bobcats will get a day off on Saturday before facing the winner of Niagara and Fairfield on Sunday. Either MAAC leading scorer Tyler Nelson or co-Player of the Year Kahlil Dukes awaits, but Dunleavy’s team is up to the challenge.

“It’s tournament play so anything can really happen,” Dunleavy said. “We talked about with our guys all year, we are trying to be our best at this point, I think we are, I think we’re playing our best basketball. What that can reveal for us we don’t know, all we can do is just prepare for the next opponent. But I know this one is going to give us a lot of momentum in terms of our confidence, the aggressiveness we play with and just our belief in ourselves.”

While a little more breathing room at the end of a game would be nice, don’t expect Sunday to be any different.

“It wouldn’t be a Quinnipiac basketball game if it didn’t come down to the final moments,” Dunleavy said.

Regardless of how they win, the Bobcats find themselves as one of four teams remaining in the MAAC, something they hadn’t done since the 2013-14 season.