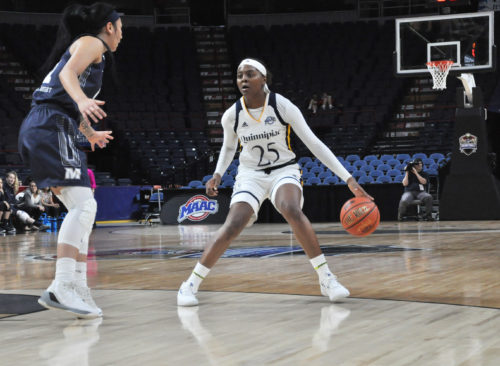 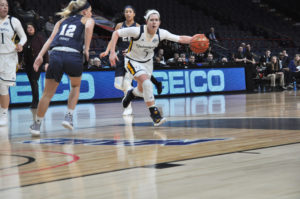 [/media-credit]The Quinnipiac women’s basketball team continued its domination of the MAAC as it defeated Monmouth 83-44 in the quarterfinals of the MAAC Tournament on Friday afternoon in Albany.

The win was the second-part of a good day for Quinnipiac head coach Tricia Fabbri, who won the conference’s coach of the year on Friday morning, but she was quick to point out that the award is bigger than her work.

“There’s no ‘I’ in team,” Tricia Fabbri said. “It’s a shared award because there are so many people that help us get to where we are and it’s just a great reflection on the university…They really care about women’s basketball. My staff [and] my young ladies here that are playing are extremely talented. There’s just so much that goes into it. I get the award but it’s shared by so many.”

It didn’t take long for the Bobcats to take control as they started the game off on a 9-0 run in the first 3:30 of the game, which was the theme of this game for the Bobcats as it took more than three minutes for the Hawks to score in each quarter.

The Hawks went blow-to-blow with the Bobcats to close out the first quarter as the Bobcats carried an 18-9 lead going into the second. That’s when senior guard Carly Fabbri took over, scoring eight of her game-high 19 points in the quarter. But she credited the team’s defense at the start for the win.

“We came up here for a purpose, we want to go home with another championship trophy,” Carly Fabbri said. “…To start the game, everyone’s pretty focused up. We take pride on our defensive capabilities…I just think that coming out with a strong start is always really important for these game.”

The second quarter was the Bobcats best quarter of the game as they outscored the Hawks 23-5. Just like the first quarter, the Bobcats started it off with a 9-0 run behind five points from Fabbri and a bucket from redshirt junior forward Jen Fay and junior forward Aryn McClure. 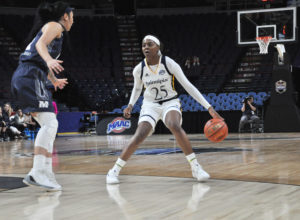 [/media-credit]After the Hawks scored their first basket of the second quarter with 6:07 left in the half, the Bobcats went on a 14-0 run over the next five minutes before the Hawks made a 3-pointer with 45 seconds left in the half.

Four Bobcats scored in that stretch as junior guard Brittany Martin led the way scoring six points as the Bobcats went into the locker room up 41-14.

“We started out the game well and we just got hotter into the second quarter,” Tricia Fabbri said. “By halftime, we [were up by] a substantial margin and a lead and just did not look back.”

Quinnipiac’s other star of the game was junior forward Paula Strautmane, who recorded her first double-double of the year with 10 points and 11 rebounds. Eight of Strautmane’s rebounds came on the offensive end. Just like Carly Fabbri, Strautmane also gave credit to the team’s defense for the win.

“[Defense] is what we’ve been focusing on the most in the practices,” Strautmane said. “We know that we can have low times in the game where our shots are not going in and at those times all you can do is depend on defense. And that’s what we did, but thankfully our shots were going in.”

The Bobcats dominated up-and-down the stat sheet as all 12 Bobcats that played on Friday made a shot. On the defensive end, the Bobcats had 10 steals and forced 21 turnovers from the MAAC’s most turnover-prone team.

“In terms of an opening game in the tournament, this is really how you want to open it up,” Tricia Fabbri said. “We had every player score and a lot of things went right for us in this opening round game against Monmouth.”

Quinnipiac will next play in the semifinal round of the MAAC Tournament on Sunday at 11 a.m. It will face the winner of Saturday’s game between No. 4 seed Fairfield and No. 5 seed Rider. The Bobcats are undefeated against both teams this season.