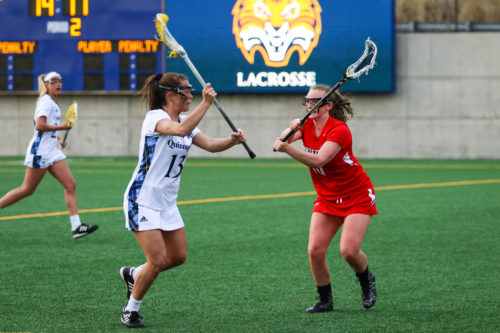 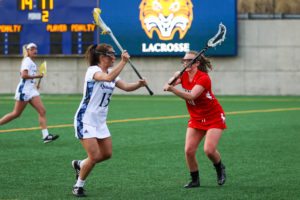 [/media-credit]Thirteen Bobcats registered a point as the Quinnipiac women’s lacrosse defeated Hartford 16-4 on Wednesday at the Quinnipiac Lacrosse Stadium.

Seven of the 13 Bobcats (2-2) recorded multiple points in the contest, with five of them scoring two goals. Comparatively, only five Hawks (1-2) registered a point during the game. This widespread scoring shows that it’s not just the starters who are helping drive the team forward.

“The depth and the potential of the program is still to be seen,” Quinnipiac head coach Tanya Kotowicz said. “We’re learning everyday what we can use and how we can use them and who’s ready to step up so it’s been really fun to see.”

One of the highlights of the day for the Bobcats was a five-point showing from sophomore attack Ashley Bobinski who finished the day with two goals and three assists. These five points bring her season total up to 12 goals and six assists in four games. Part of her success is due to the chemistry of the team, according to Bobinski.

“Building chemistry is something we really wanted to focus on a lot this year and having that depth,” Bobinski said. “Different connections on offense with who’s scoring who’s assisting the goals, on defense who’s working together as a unit so we made sure to make everybody on the team involved and having that chemistry on the field has helped us win the games that we have.”

The Bobcats have been improving in the goals against category as the season has progressed. They’ve gone from giving up 18 in the season-opener to just four on Wednesday. Kotowicz accredits that to the defense. 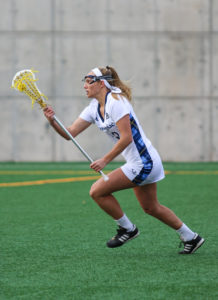 [/media-credit]“Our defensive end we call them the ‘Energy Bus,’ they’re leading the pack for us,” Kotowicz said. “Kiera Kelly, Haley Everding, Cara O’Meally and Aubrey Conti, they all have a role on this defense and they’re all doing little pieces to that.”

The lone bright spot for the Hawks was the play of freshman goaltender Cassidy Hock. While she conceded 16 goals to the Bobcats, she did save 14 shots. Hock also made some key saves in the first half to keep their deficit at six heading into halftime.

“We talked about that, we knew she was a goalie with quick hands,” Bobinski said. “After a few timeouts and especially after halftime we talked about moving the goalie, just being smart with our shot placements and putting the ball in the back of the net.”

The Bobcats look to win their third game in a row at home against the Sacred Heart Pioneers on Saturday, March 3.