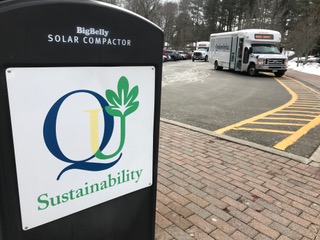 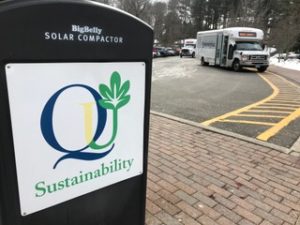 One of those organizations, the Quinnipiac Sustainability Committee, hopes that it can be a part of the change towards a greener future.

Chairman of the committee and associate engineering professor, John Reap, explained that their mission doesn’t end with simply implementing sustainability efforts around the university’s campuses.

The committee is working to achieve that goal in a two-part approach.

The first, more visible approach, is to initiate sustainability projects around campus. So far, these projects have taken the form of Earth Day fashion shows (featuring clothes made from recycled materials), planting a garden outside of the Mount Carmel Student Center and on-campus farmers’ markets.

The second key to the committee’s goal is implementing a curriculum that encourages students to more seriously consider the issue of sustainability.

“The idea that is developing a curriculum that would allow students to touch on the environment or the social side of sustainability,” Reap said. “And we are ripe for developing something like that.”

The responsibility to spark an environmental interest in students has fallen onto the shoulders of Reap’s committee because the school administratio n is yet to initiate a visible, sponsored office responsible for such efforts, according to political science professor Sean Duffy.

In 2014, the school hired an outside agency, Resonate, to perform an in depth sustainability report. Part of that report was an assessment of student awareness on the topic of environmental conservation, according to the executive summary:

“Our research and analysis reveal that the QU student body is viewed, by students and faculty alike, as intelligent, but generally unaware of and unengaged with sustainability,” the report stated.

That perceived student apathy is the reason for administration dragging its feet with developing a more robust sustainability plan, Reap explained.

“Administration wants to see that the outcome of a project will be beneficial to the university in multiple ways, and most importantly to students,” Reap said. “There’s not much benefit to supporting a green project that doesn’t seem to have a big benefit for students.”

As to if administration has an accurate picture of students’ beliefs, junior advertising major Ryan Muscato says, ‘no.’

“That is an unfortunate assumption on the part of the school officials,” Muscato said. “I do care about the environment and I do a meticulous job of making sure I make a small carbon footprint.”

Gina Gagliardi, a junior health science major, agrees that conservation is an important issue to her. She suggests small measures university staff could take that would add up quickly.

“A lot of professors print handouts when they could just be posted online for students,” Gagliardi said. “That would be a simple fix that would make a big difference.”

Whether or not that indifference toward making QU a greener place stems from the student body or administration is up for debate. But one thing is not – there is definitely room for improvement.

Quinnipiac received a startling ‘D’ in overall sustainability, a stark contrast to neighboring schools – Yale earned a glowing ‘A’ on the same website. Greenreportcard.org, an independent, non-profit assessor of colleges’ conservation efforts, uses factors like transportation, recycling, energy consumption and administration. Alarmingly, QU earned an ‘F’ under the transportation category, and a ‘D’ in student involvement.

Quinnipiac has managed to source all of its power consumption from renewable sources. In addition to that, the school generates its own electricity through windmills and solar panels, the latter supplying 30 percent of the energy used in the Crescent building on York Hill, according to Reap.

Facilities has managed to distribute an impressive number of recycling bins around campus, something Muscato says is one of Quinnipiac’s stronger sustainability efforts.

“When I need to recycle a bottle, I’m usually in seeing distance from a recycling bin,” Muscato said. “I can never find one when I’m not at QU.”

Although facilities assures the university community that they are in fact recycling using the single stream method, some are skeptical as to whether or not all those water bottles make it from the bin to a recycling center.

While Quinnipiac’s approach to a ‘less unsustainable’ campus is certainly muddled with conflicting agencies and opinions, Duffy maintains that it is an issue with a simple fix.

“In my opinion, one of the problems with the lack of visible sustainability initiatives on campus is because there¹s no visible office or initiative that has a membership people know about and a budget to advance initiatives,” Duffy said through an email. “One of the recommendations of the report you¹ve referred to was to have a director of sustainability – or even an office – on campus.”

And if the administration is still concerned with students’ opinion on the matter, Ryan Muscato has some clear words to the powers at be.

“Regardless of if students care about conservation or not, administration should,” Muscato said. “No efforts towards sustainability are wasted.”

The Department of Facilities did not respond for comment.