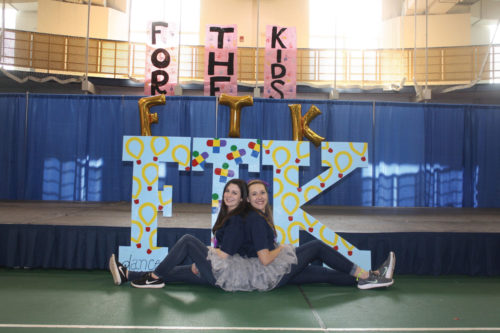 It was April 21, 2017 when I received the news that I was accepted to serve on the Management Team as the Morale Co-Chair, and from that day forward, the planning began. There is so much that goes into QTHON beyond what lies on the surface or is visible the day of. As a team, we create ways to fundraise, gather students to build campus involvement and host events throughout the year to keep QTHON in the communities minds and hearts. Through everything, we do everything in our power to not only meet our financial goal, but give the children and families of Connecticut Children’s a night they cannot and will not forget. Every Monday night beginning in April, the Management eam along with our hospital advisor and faculty advisor met to work on our plans for events leading up to QTHON, in addition to the night of. As the Morale Co-Chairs we were responsible for creating the Morale Committee, which serves as the spirit leaders the night of the event. With several applicants we narrowed it down to 23 individuals who are full of spirit, passion, and drive to make others love QTHON as much as they do. We held additional meetings with our committee alongside dance practices for the hourly morale dance, which is created by myself, Amanda and our four Morale Captains.

Why is meeting the families so important? 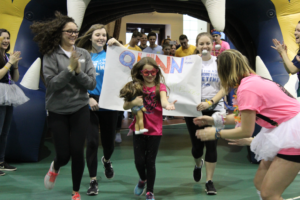 [/media-credit]The children and families of Connecticut Children’s Medical Center have gone through some incredibly difficult challenges. Despite these hardships, these individuals are some of the most optimistic, happy and inspiring people I have had the privilege of meeting. Meeting the families of Connecticut Children’s is what inspires me to keep pushing to make QTHON bigger and better in every way. Their stories and experiences truly demonstrate the incredible work that all of the staff at Connecticut Children’s does on a daily basis. These families are the examples of how positive experiences can come from negative ones and why events such as QTHON are so important. We truly are making a difference in all of the lives of these children and families. As one of the mothers of a miracle child shared with the crowd stated: “Insurance covers a lot. What they don’t cover are the iPads that have games geared toward coping mechanisms for children to utilize during a multiple hour treatment session, the family centered care that is provided through the incredible life specialists at the hospital, the entertainment systems that are in treatment rooms that make them feel a little less scary.” To me, it is one thing to raise money for a great cause, but it is another thing to see the positive effects and change it provides to another individual.

Why I love QTHON

It is difficult to put into words why I love QTHON as much as I do. QTHON is an event that unites the entire QU community. Organizations and individuals come together to make such a positive impact, which is not something we get to see everyday. Connecticut Children’s Medical Center is not just a hospital, but a place where children and families do not have to feel alone. Connecticut Children’s puts emphasis on client and family centered care, down to having the air filtered four times more than a typical air conditioner so it doesn’t have that “hospital smell.” Being a part of QTHON is being a part of something that is bigger than myself. It provides a night of fun, laughter, games, energy, excitement and more to an entire community, which I think is pretty incredible. We have events like QTHON not only for children that we get to celebrate the night of but for those who are still fighting and can’t. I dance for the hope that one day we won’t have to.

This year QTHON did something no one thought we could do, we exceeded our goal of $250,000 and raised $265,431.79. This was no easy task; the Management Team, committee members, students, faculty and local businesses all had to come together for this year-long fundraiser. At the end of the day, every single person was motivated by the cause, motivated to keep going, stayed motivated knowing that all the money we raised went directly to Connecticut Children’s Medical Center impacting the children and their families.

Throughout the entire year, there were small fundraisers such as bake sales, Valentine’s day cookie sales, holiday sales and Side Street, Chipotle and Panera Bread fundraisers. Students would go canning asking people for money, spreading the QTHON name outside of businesses such as Dunkin Donuts and Walmart. There would be jars at local places such as Acropolis Diner and Ray & Mike’s Deli that people would throw their extra change into. Sponsors would give tangible donations for our events or would donate different amounts of money to our cause. What really put us over the top however, was personal and organization fundraising. Organizations would hold fundraisers throughout the year where all their proceeds would go directly to QTHON. Individuals would ask family members, friends, anyone to donate to their page. This year Venmo was huge, as students would ask their friends if they could request from them $1 to $3 for the kids, because every dollar counts. It was so amazing how the entire community, our small Quinnipiac community, came together and raised such a large amount of money going to such an amazing cause. 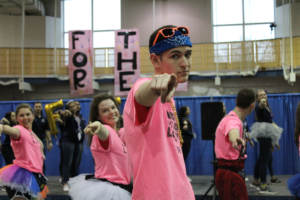 [/media-credit]Morale is the heart of QTHON, the train that keeps QTHON running. Morale is the committee that every year is in a different colored shirt, dressed ridiculously and are some of the loudest people at QTHON. People on the Morale Committee have a vital role throughout the entire year leading up to the day of QTHON. They are constantly individually fundraising, and this year, the morale committee exceeded their goal by over $5,700 raising a total of $12,702. Throughout the year, they would table in the student center getting our name out there and raising money. They worked so hard learning the morale dance, the dance that is done every hour on the hour that is composed of snip bits of about 30 songs. By them knowing the dance, it allows other people to follow along with them and come together as a QTHON organization to dance together every hour. The night of, Morale runs something called the “Morale Jail,” which allows people to pay to send their friend to jail in which they have to pay to get out! It was such a huge success this year and would not have been possible without the Morale Committee. Finally, throughout the entire night of QTHON, Morale Committee dresses up and keeps everyone’s spirits up, reminding them why they are there in the first place. They are the ones that are constantly bringing the energy up higher than it was during the previous hour. They are making sure everyone is smiling, having fun, dancing and doing everything they can to help make QTHON a night to remember.

Why I love QTHON

I absolutely love QTHON. I love seeing the entire community come together for a cause so much greater than ourselves. I love seeing the faces of the children who are there and healthy, dance the night away playing games and having a blast. I love the faces of the parents and families watching their children and loved ones have an opportunity to be a kid after all they have gone through. It gives me such pride to be a part of an organization that gives back directly to children and families that have gone through so much, so much more than I could possibly imagine. I love QTHON because we are constantly raising money for and constantly fighting for those kids who can’t, until one day they don’t have to fight any longer.