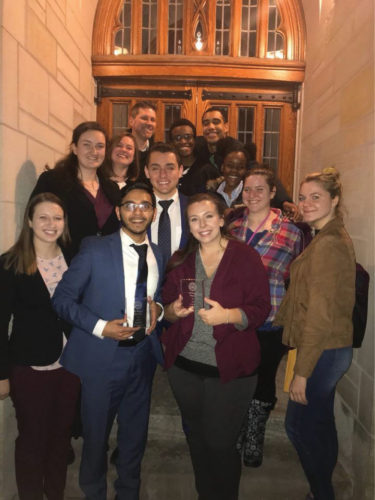 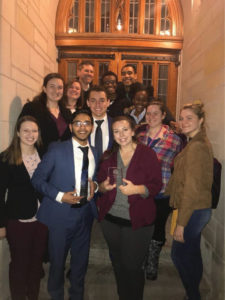 Quinnipiac received their bid after competing at the New Haven Regional Feb. 17 and 18. Over the two days, Quinnipiac had eight matches against four teams. The two teams sat before a real judge and attorneys and acted out a case. Students worked as both lawyers and witnesses to try and win the case.

“These draws are some of the hardest draws we have ever faced,” Ali Munshi, a senior political science major and president of the Mock Trial Organization said. “I thought we had won all three but we had nerves.”

Quinnipiac got one of the toughest overall draws at the tournament. The team had to go to trial against BU, Stonehill College, King’s College and Tufts University. Tufts’ only two losses came against QU.

After finishing with a record of 5-3, Quinnipiac got in on a wild card due to its high strength of schedule, advancing to the national stage for the first time since 2014. Two of its three losses were by mere points to the winner of the tournament, Boston University (BU). The third loss was by a single point to Kings College.

“We lost because we made mistakes. We have opportunities to redeem ourselves,” Munshi said. “It’s March Madness for us. We’re gonna show that Quinnipiac is one of the best teams in the country.”

Quinnipiac’s team has no shortage of skillful firepower on the competition team. Munshi himself won an Outstanding Attorney Commendation for the competition and was ranked the second overall attorney, trailing only Kassie DeFala of University of New Haven. Senior psychology and criminal justice major Danielle Farrell also received an Outstanding Witness Commendation for being the 10th overall witness.

This is the second time Quinnipiac Mock Trial has advanced this far in the national circuit. The last time they did, it was on a 6-2 record at the New Haven Regional with their only losses coming against Columbia University.

“They had an easier draw (in 2014) than we did this year,” Munshi said. “For us to get back here is just huge. I’ve been doing this for four years and I’ve been waiting every single year to move on. The difference between those teams and this one is not talent but the work we put in.”

Munshi also credits the team’s success to the chemistry the team developed over the year. He says that a combination of new members and building of a family-like culture have helped make Quinnipiac the team it is today.