Wake the Giant tickets not available for graduate students 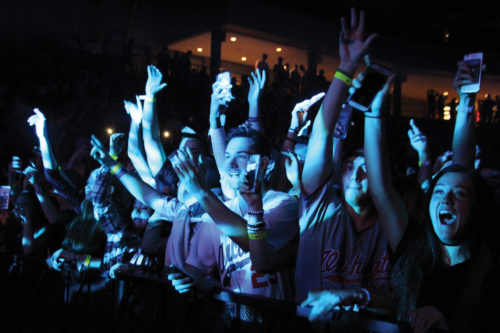 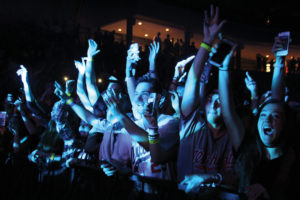 [/media-credit]The Wake the Giant concert is one of the most anticipated events for the Quinnipiac student body, but when it comes to 3+1 graduate students, they will not be able to participate.

Students who are in the 3+1 program are able to complete four years at the university with both a bachelors and a masters degree, however during their fourth year, they are excluded from being the first students to attempt to order tickets for the annual concert.

Tickets are primarily reserved for undergraduate students before graduates can order a ticket for themselves, according to Mainstage Chair for the Student Programming Board (SPB) Joseph Mania.

“The reasoning behind graduate students not being able to purchase tickets at this time is because SPB is funded through the Student Government Association (SGA). Those funds are generated by undergraduate student activity fees,” Mania said. “This being said, our undergraduate population is our priority as they are responsible for funding the concert.”

Mania said that this method of selling tickets has always been enforced at the university. Assistant Director of Campus Life for Student Centers and Student Involvement Hannah Pancak agrees with this statement, stating herself that SGA uses undergraduate fees to help provide budgets for clubs and organizations.

If tickets end up being sold out, that means there is no way for graduate students to order tickets, according to Pancak.

“I understand completely that it’s frustrating when in a 3+1 program you’re already a graduate student, but a lot of your other peers that aren’t in the 3+1 program are undergraduate students in their fourth year, but unfortunately that’s just how our funding works,” Pancak said.

Senior Zachary Sobel is considered a graduate student at the university and he said that he is baffled that graduates in the 3+1 program will not be able to order tickets the same time as undergraduates, since the university treats 3+1 graduates like seniors.

“In almost every other aspect of our lives here at QU, we are considered seniors and not graduate students,” Sobel said. “Most frats and sororities still allow us to be members and not alumni. We were practically forced to live in QU owned undergraduate housing or else we would partially lose our scholarship, which is a big reason many people are in the program in the first place.”

Sobel said that from what he’s heard, graduates in the 3+1 program are intended to go to the Graduate Gala instead of the Wake the Giant concert, yet almost no one in their senior year of the program will be attending because most of their other friends are still undergraduates.

Senior Chelsea Campbell is also in the 3+1 program. She said she has been supportive in the previous Wake the Giant concerts.

“I have attended every single (concert) because I view them as a large community event held here at QU for the students,” Campbell said.

Campbell said it is upsetting that senior students in the program cannot attend Wake the Giant if the tickets are sold out because it would be their last opportunity to attend the show.

“I understand that other graduate students would have to depend on Wake the Giant tickets not being sold out because, yes, they are graduate students, and they have already experienced their senior year,” Campbell said. “I just hope that for the future years of 3+1, they will have the ability to take full advantage of senior year privileges in their fourth year, as it is a huge part of what keeps them here at QU for the graduate year.”