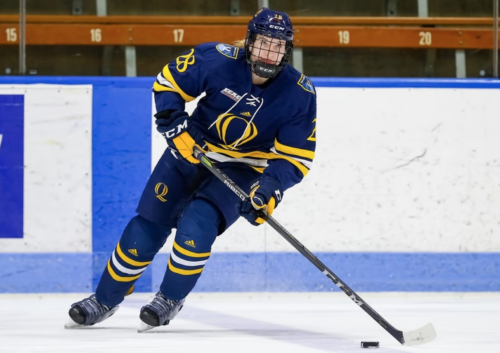 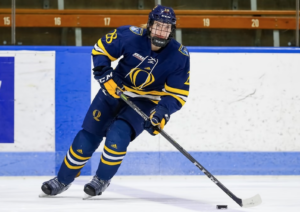 [/media-credit]If anyone had told freshman forward Brooke Bonsteel at the start of the Quinnipiac women’s ice hockey season that she would be a top goal scorer for the team, she wouldn’t have believed you.

“I’ve never really been a goal scorer,” Bonsteel said. “But now knowing I can score, and as the points started coming, it just boosted my confidence.”

That confidence was evident on the ice this season. She has became a huge asset on a team that for the most part, struggled this year in scoring. Quinnipiac only averaged 1.85 goals per game this year, ranking ninth in ECAC Hockey. However, Bonsteel was been able to contribute 10 goals this year, good for second on the team behind junior captain forward Melissa Samoskevich (14).

Bonsteel grew up in Mississauga, Ontario, Canada, just a half an hour drive from Toronto. She started playing hockey at 4 years old, starting off playing alongside the boys. Once she got older, she played for her hometown team, the Mississauga Jr. Chiefs of the Provincial Women’s Hockey League. She played there for three years, from 2014-17, and she was eventually named assistant captain in 2016-17.

Bonsteel was then recruited to come play for Quinnipiac and she made the 510-mile trip to Hamden, uprooting her whole life in Ontario to get a chance to play at the collegiate level in the United States. The transition from playing for her native team to playing for a Division I collegiate team was quite surprising to her.

“It’s been a completely different experience than I had at home,” Bonsteel said. “It’s just a different atmosphere completely. Just like the training and the skating and the college lifestyle you always think about.”

Looking at the numbers, she does not jump out as a goal scorer. In 2016-17, she tallied career highs with six goals and 15 assists. She finished with a total of 14 goals and 34 assists in her three years with Mississauga. She’s already more than halfway through surpassing that career total in goals just after her first season with the Bobcats.

“I think she kind of surprised herself that she can score,” Quinnipiac head coach Cassandra Turner said. “She’s such an intelligent hockey player. She’s at the right place at the right time both offensively and defensively.”

Her effort has not only been noticed by her coach, but the upperclassmen as well.

“I’ve seen just a lot of hard work [from Bonsteel],” Samoskevich said. “It’s always cool when freshmen are able to step up and put pucks in the net.” 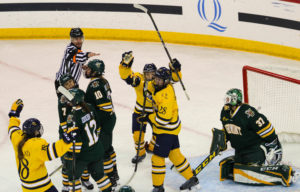 [/media-credit]The goal scoring began for Bonsteel back in October. Just five games in, on Oct. 13, her two-goal performance led the team to a 4-1 victory against Vermont. The game marked not only the first goals of her collegiate career, but her first multi-point game as well. But Bonsteel was quick to give her teammates credit for giving her the opportunity to get her name on the scoresheet.

“I think it was really cool, just the teamwork that was involved,” Bonsteel said. “It felt great and it’s something you always dream of. Obviously it’s not just a single player show, so I think just the support I had from my teammates was there and they really helped me out.”

In addition to being a prominent player, she’s excelling in academics as well. Bonsteel is an accounting major in the accelerated 3+1 BA/MS business program, in which students will take three years of undergraduate classes, one year of graduate classes and leave Quinnipiac with two degrees. These students must take additional classes in order to stay on track to graduate in the four years with a master’s degree.

But the added workload has not seemed to faze her, as she had good enough marks to be placed on the Dean’s List for the Fall 2017 semester.

“I think time management has always been one of my strong suits,” Bonsteel said. “Managing the 3+1 hasn’t been bad thus far. I’m just a freshman though, so I’m just getting started.”

Bonsteel is only the second player to be enrolled in a 3+1 MBA program that has also played on the women’s ice hockey team. Balancing the practices, games and training and film sessions on top of the 19 credits she has to take each semester may seem to be heavy to handle for the average college student, but her teammates have noticed just how well she has dealt with it.

As a freshman, she still has many games ahead of her in her Quinnipiac career. With the season winding down to a close, Bonsteel reflected on how she was able to play a key role and offered some advice to the incoming freshman on the team.

“I think confidence plays a big roll,” Bonsteel said. “Coming in, I didn’t have as much confidence as I do now obviously. Just believing in yourself and putting in your best work everyday as how you will find success.”

Along with Bonsteel, fellow freshman forward Laura Lundblad and sophomore forward Sarah-Eve Coutu-Godbout have formed quite the dynamic line for the Bobcats. That forward trio has contributed 17 goals and 13 assists, good for 30 points on the season.

With all three being underclassmen, the future seems to be in good hands for Turner’s squad, even after a first-round defeat at the hands of No. 8 St. Lawrence this past weekend.

“[Bonsteel] has been truly that glue with Sarah-Eve and [Lundblad] on that line,” Turner said. “It’s nice to have found a spot where she can be successf ul and we’re really proud of what she’s done this season.”