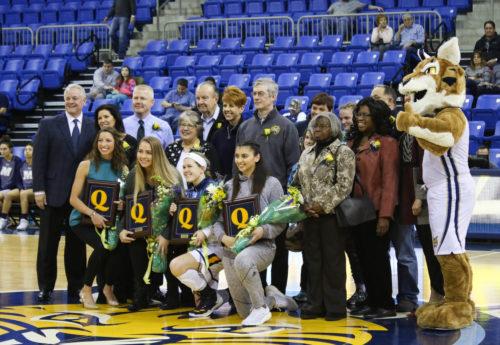 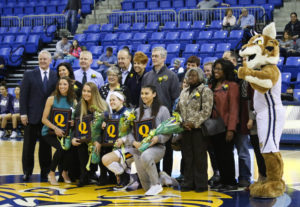 [/media-credit]This Senior Day was one to remember for the Quinnipiac women’s basketball team as it downed Monmouth 77-57 on Sunday.

The win against the Hawks (9-20, 7-11 MAAC) came off a road trip that saw the Bobcats (24-5, 18-0 MAAC) trailing at the half of each of those games. The Bobcats came out with the win in each of those after coming from behind.

“I will say that probably one of the best attributes this team has had all year long is their composure and their confidence in when it’s not going well for a stretch of possessions, out of a timeout or during the game we do get our footing,” Tricia Fabbri said. “We’re able to stem the tide, find the right answer, go ahead and make what needs to happen in the next play to turn the tide for us to go up make a run.”

There were 2,112 people in attendance on Sunday. By the end of senior guard, and captain, Carly Fabbri’s 21-point performance, they were chanting her name.

“I thought the crowd today was incredible,” Carly Fabbri said. “It was an awesome crowd and to hear the chant that was pretty cool coming off that court for the last time.”

With Carly Fabbri graduating, the door opens for junior guard Brittany Martin, who finished Sunday with eight points and shot perfect in two attempts from downtown. Martin played in 15 games this season and has yet to start, but according to Tricia Fabbri, she keeps improving.

“I just think it’s [Martin’s] overall confidence that she’s playing with,” Tricia Fabbri said. “She’s always had the talent now she’s just backing it up with her confidence going out there…since the conference play she’s really hit a groove for us and really going in and contributing and being an impact player for us.”

Carly Fabbri, as well as fellow seniors Brittany Johnson and Sarah Shewan who are out for the season with injury, has accomplished a lot in her career as a Bobcat and she’s left a mark on the teammates she’ll soon be leaving.

“I came in with them so they’re as close as anybody is to me on this team so it’s kind of sad that I can’t really go out with them,” redshirt junior forward Jen Fay said. “I’m just glad we’re keeping the season going and we’ve done a lot of great things together so it’s been fun.” 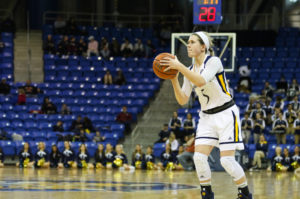 [/media-credit]This marks the final regular season game and home game in Carly Fabbri’s career. In addition, it’s the final home game she will play with her mother as her coach. With this in consideration, Tricia Fabbri isn’t certain of how she feels about it.

“I can’t process it quite yet because I always see what’s next,” Tricia Fabbri said. “I’m happy that we won, I’m happy that she played particularly well and I’m happy that we get this moment getting to 18-0, the top seed, and we’re excited for what’s next going up into albany so that’s really a focus. There’s no reflecting… that’ll all happen when we’re in TD Bank [Sports Center] and it’s set up for graduation in May.”

The Bobcats look to repeat as MAAC tournament champions with the opening of the tournament Thursday, March 1.