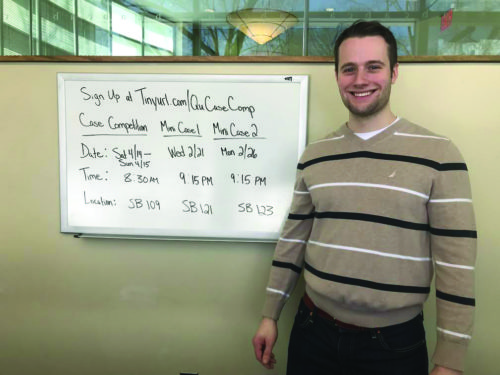 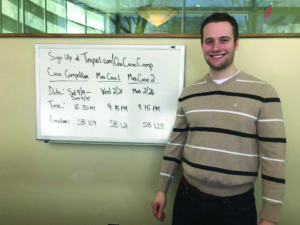 [/media-credit]The Consulting Group club will be hosting its second Case Competition on April 14 and 15.

Teams of three to five students will be given a problem and data at the event, and will have 24 hours to find a solution. Then, they will have to present their solution in front of a panel of judges. Cash prizes will be given to the top three teams, with first place receiving $1,500.

The purpose of the organization is to have students work in teams, develop real-world problem solving skills, enable their creativity and improve their understanding of the business environment, according to the Consulting Group’s constitution.

To register for the Case Competition, teams must fill out a form on the Case Competion’s website and give a $20 deposit, which will be given back during the event. The deadline tosign up is Wednesday, Feb. 28. The event is open to all majors. Full rules for the event are also available on the site.

Senior finance major and the Consulting Group’s President Thomas Moylan participated in a case competition held in New York City last year by APICS (American Production and Inventory Control Society), which focused on solutions for supply chain management. When he was in the event, Moylan said it was a thrill.

“Since the case is so broad, you can go down any path you want, and since it’s only that one weekend, it’s short and intense,” he said.

Moylan, who founded the Consulting Group last year, said that his intent in establishing the group was to focus on these kinds of large events, rather than be a club that meets regularly.

“Who wants to be talked at?” Moylan asked. “You want to be engaged in something, and by hosting more events, we think this is the best way to get people involved.”

Dave Tomczyk, the club’s advisor and an assistant entrepreneurship professor, also said that this thinking comes from there being other clubs that already do consulting at QU.

“Instead of focusing on doing projects, [the Consulting Group] focuses on bringing concepts of analysis, business skill, and presentation skills to people across the entire university, because business isn’t just for business students,” he said.

Tomczyk can speak from his own experience on that, having studied philosophy, economics, political science, religion and astrology while in college. He thinks that having not studied business while in school could be helpful for an individual’s chances in working in the business world.

“This is a way to see that their major doesn’t limit them; it actually gives them greater power and flexibility to go into the workforce and be confident and competitive,” Tomczyk said.

As for how skills that are applicable in business can be used elsewhere, Moylan thought about the ability to communicate ideas and information.

Tomczyk thinks the interdisciplinary overlap is what is important about the Case Competition. Some in the administration feel the same way, as Tomczyk says that he got the event’s $3,000 in prize money from Mark Thompson, Quinnipiac’s provost.

“[Thompson] has been incredibly generous,” Tomczyk said. “He loves interdisciplinary challenges, and competitions and classes and anything that helps to get people from multiple majors working together. He’s more than happy to put his money where his mouth is.”

Junior Kyle Trusch participated in the Case Competition last year. He thinks that there could be better ways to gear the event toward bringing in non-business majors, like not having problems be strictly business related.

“If you move a little bit more away from the finance side of things and numbers, numbers, numbers and kinda go more toward the creative [and] innovative ideas, there’s a lot of people across many different majors at this school that can come up with great ideas,” he said.

Despite his critique, Trusch said that he had a great time last year and would consider going to this year’s Case Competition.

“It was a two-day sprint. You were working long hours, but it was a lot of fun. It was cool to apply what you learned in the classroom to a realistic setting,” he said.