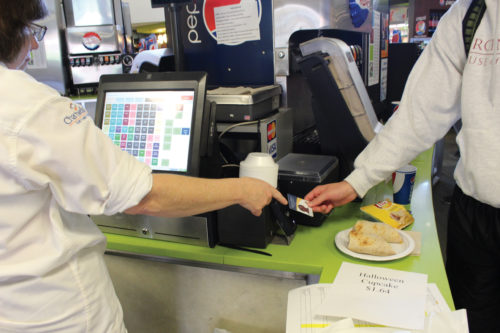 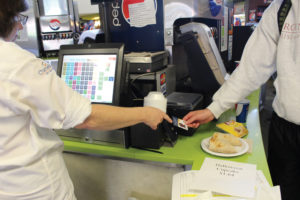 [/media-credit]Chartwells aims to provide students with a satisfactory dining experience at their home away from home. However, within the past few years Chartwells has come to realize that many students take advantage of this experience.

“There is about a 10 percent theft rate,” Leean Spalding, the Associate Director of Dining, said. “I don’t think they’re malicious, they just think, ‘Oh, I’m just grazing,’ they don’t put two and two together.”

Chuck Couture, the Resident District Manager, has observed that the majority of theft occurs subconsciously.

“People just eat fries while they’re waiting for their burger, then put their cup down. Same thing with chicken tenders,” Couture said. “They eat pizza before the get to the end of line, they’ll pick an entrée then choose something else they like and they’ll just set it down for us to clean up.”

French fries, chicken tenders and bottled beverages seem to be the preferred item of theft. While the majority steal these small items, other students go to great lengths to get their product of choice for free.

“The bottled Starbucks drinks or any bottled beverage are really popular, they’ll unscrew the cap, pour it in a Pepsi cup and say it’s water at the register,” Couture said. “We actually had to call the campus security last semester to have them just come to the Bobcat Den and be in there because people were stealing just about anything that wasn’t nailed down in the convenience area. The registers are to their back so people were just stuffing their backpacks with stuff.”

While the majority of the theft occurs through minute purchases, many students do not realize the extent of their damage.

“We purchased a certain amount of chicken tenders and fries so we should have 100 percent at the register, but it’s 87 percent, so 13 percent of what we prepared doesn’t get paid for,” Couture said. “It does affect the prices of everything, it affects more than people I think realize. But that one little fry, multiply that by everyone that comes in, we do almost 8,000 transactions a day.”

The theft even goes beyond food to products such as plates and silverware. Many students take these products back to their room instead of asking for a paper plate. The issue occurs when students fail to return the products to the dining hall.

“I spend $500 a week on china and silverware just to keep our return where we need it to be,” Spalding said.

For the students who do steal, it comes down to a matter of convenience and price.

“I steal coffee every once in awhile,” freshman entrepreneurship major Max Mallinen said. “I feel like everything is so expensive, it feels like it’s so miniscule that it doesn’t matter.”

Even students who do not steal have picked up on the trend.

“I’ve definitely seen people steal before,” sophomore advertising major Abbie Guglietta, said. “Usually people just walk out and sneak by. The food is really overpriced so a lot of people don’t feel like it’s worth paying for and a lot of people run out of money on their meal plans.”

The Chartwells company wants students to understand that theft is not acceptable.

“I ask kids, ‘Do you just walk into Target or Walmart and take whatever you want?’” Couture said. “And they say, ‘Well no I wouldn’t do that,’ but they feel like it’s okay here and I’ve never been able to figure that out.”

Chartwells is here to serve the students and while they’ve noticed the issue, there is only so much that can be done.

“We struggle all the time because it’s busy and we’re trying to serve you guys the best we can and the last thing I want to do is walk around and accuse people of stealing,” Couture said. “We have made a conscious decision that if someone steals right in front of me I’ll say something but the last thing we want to do is, I’m not a police officer, I don’t want to walk around and stop people.”

While the company is running on a ‘see something say something’ policy, they do have a course of action that they follow for extreme offenders.

“Our policy here is that if we confront you and you say ‘Okay I’ll pay for it’ and you go through you’re fine,” Spalding said. “But if we confront you and you’re argumentative then I will send an email to the person that made the offense and CC Public Safety, it’s like a warning. If it happens again we report it to Public Safety, disciplinary and Residential Life. It rarely goes to that but we’ve had people work in the dish room as their payment.”

Many students seem to feel as though the food in the dining hall belongs to them since they are paying to attend the university. However, Chartwells reminds students that they are an independent company.

“We’re not a private university, we’re contracted by the school,” Couture said. “The whole ‘I pay $60,000 a year’ mentality doesn’t work because dining’s portion of that is less than five percent of what they pay here. We’re not here to make billions of dollars off the back of students, we’re just trying to make the budget. But things like this make it harder for us to make the budget.”

What Chartwells wants students to remember is the family aspect of the dining plan.

“You’re kind of like our family because we see you everyday,” Spalding said “It’s not like McDonald’s or Walmart, it’s a different feeling, you need to create a family; your dining experience has to be enjoyable. If someone says, ‘I forgot my card,’ I let them go through, it’s not a big deal unless they make a habit.”

Couture expressed that he had similar beliefs to his partners.