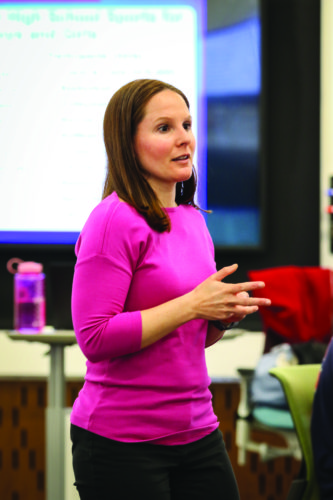 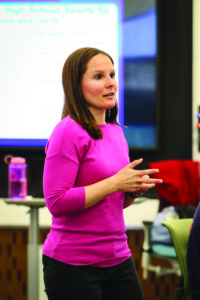 [/media-credit]For most Connecticut collegiate basketball fans, the University of Connecticut’s men’s basketball 1990 “Dream Season” represents the year the program made a leap to the Big East’s upper echelon. But for associate athletic director of academics at Quinnipiac, Alyssa Budkofsky, that season is special to her for another reason entirely.

“I remember watching the 1990 ‘Dream Season’ they had and seeing that there was a girl on the end of the bench that was giving out towels and water,” Budkofsky said. “I remember saying to my mother, ‘That’s what I want to do.’”

As soon as Budkofsky was accepted to UConn, she sent a letter to the basketball department, hoping for a role as a student manager. The man who responded was none other than former Quinnipiac head men’s basketball coach Tom Moore, who was an assistant at UConn.

“I got a phone call [and Moore] basically told me when I get to campus to come in and see what my schedule looks like,” Budkofsky said. “And [they would] put [me] to work at some of the practices.”

Standing at 4-foot-11-inches, Budkofsky isn’t the typical student manager for a men’s basketball team. But that never mattered to her. She had her mind set.

“I initially didn’t think she’d make it,” Moore recalls. “She was so small and quiet and unassuming. I figured the intensity of the situations that our managers faced at practice would overwhelm her. I couldn’t have been more wrong.”

In her first semester of college at UConn, Budkofsky was determined to earn the team’s respect. She did everything from filling water cups to filming Saturday morning practices and late night games.

One of the little things that Budkofsky did as a student manager actually had a tremendous impact. Back then, Moore would hand write the scouting reports and give the managers a stack of papers to type up and collate. Budkofsky was able to type up the information faster than any of the other managers.

“She was not only the fastest typer we had, but more importantly, she was the smartest manager we had,” Moore said. “She made her mark on us through her reliability and consistency. There was never any drama with her, which is rare in college students. She just did everything we asked her and did it right all the time.”

In her freshman year, Budkofsky started traveling with the team for away games and the postseason tournaments.

In her first postseason run, Budkofsky witnessed the Huskies’ victory with leadership of Richard Hamilton in 1998 at Madison Square Garden, with her parents in the stands behind her. The next year, UConn went on to upset the NCAA Tournament by taking down national favorite, Duke, 77-74. That championship DNA would rub off on her whether she knew it or not.

After that season’s success, Budkofsky was appointed the men’s basketball head manager by UConn head coach Jim Calhoun. Her hard work was beginning to pay off.

“Through the process I gained a ton of self-confidence,” Budkofsky said. “I was really shy, but this was something I wanted to do, so I knew that I needed to do it. I think I worked hard at gaining the respect of the players. I was very firm, like this is my job and I take it seriously, I’m here to help you.”

By the time Budkofsky’s senior year was coming to a close, she was ready explore the sports management world, equipped with her bachelor’s degree in sports marketing. She moved to Oakland in the summer of 2001 for an internship with the Oakland Athletics and its general manager, Billly Beane, famous for their “Moneyball” strategy of building a team.

Although, it was an opportunity which came up from her ties to the University of Connecticut that trumped a prospective career in pro baseball.

Karl Hobbs, an assistant coach of the UConn basketball team when Budkofsky was there, was hired as the head men’s basketball coach at George Washington University. Hobbs offered a chance for Budkofsky to get a master’s degree while managing the basketball team. She had accepted the offer after she wrapped up the internship halfway through the Athletics’ season.

George Washington was where Budkofsky found her calling, working with student athletes. There, she began to tutor the point guard of the team on top of her new responsibilities. Little did she know tutoring athletes was a valued profession.

Being a tutor to the basketball team at George Washington came naturally to Budkofsky. She was comfortable with the athletes and gave them the support and advice they needed to balance classwork and athletics.

“Working in academic support definitely combined two of my passions. I got to work with student athletes and I always loved school,” Budkofsky said. “I’m pretty organized, I took really good notes, which were things I didn’t even realize other people struggled with.”

After completing a master’s degree in business with a sports management concentration at George Washington, Budkofsky sought to try her cards in the sport management world. 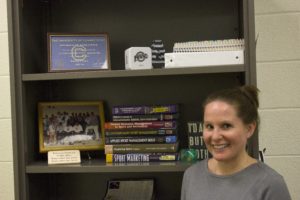 [/media-credit]She took on a position at Cal Ripken’s sports management company and travelled across the country, consulting various municipalities on the prospects of a minor league baseball team.

But her desire to serve student athletes remained unwavered.

After just a few years at Ripken Management, Budkofsky returned to George Washington in 2005, this time as a learning specialist for the whole athletic department.

As a learning specialist, Budkofsky focused her efforts helping at risk student athletes with tutoring.

Despite flourishing in her role at G.W., in 2007 Budkofsky got a call from a familiar friend with a new opportunity back in her home state of Connecticut.

It was Tom Moore on the phone again. He had just been hired as the head coach at Quinnipiac University. Moore told Budkofsky he wanted her to be his team’s academic advisor. For Budkofsky, it was an easy decision.

“I knew right away that it was a great atmosphere to be in, very community-oriented, and I was excited for the opportunity,” Budkofsky said.

At Quinnipiac, Budkofsky made an immediate impact with players as she tackled the program’s difficulties with academic progress rate.

Budkofsky drew from her past at G.W. to model her advisory plan after, which included tutoring the basketball players, planning post college careers, holding study halls, and communicating with professors, coaches, and athletes around the clock.

During the basketball season, between travel for games and Sunday night study halls, Budkofsky would sometimes be with the team everyday for a month straight at a time with no days off.

Budkofsky’s unwavering dedication and belief in the student athletes is like a super power. She has the power to change lives. Just ask Quinnipiac men’s basketball point guard from 2007-2010, Evann Baker (BS ‘11, MS ‘12).

After lighting up the MAAC in his freshman season and earning an all-freshman team award, Baker’s basketball hopes were crushed by a freak knee injury. He went through with surgery to repair the knee, but it was unsuccessful.

In the time of his greatest need, Budkofsky stepped in and helped Baker through his hardship.

“During that time, pretty much after I got the surgery, the doctor came in and told me I wouldn’t play again,” Baker said. “That was probably one of the toughest obstacles that I had to overcome. But the thing about [Budkofsky], she helped me realize my potential. What she did for me is she made my transition from a former student athlete to the real world.”

Budkofsky taught Baker the essential life skills he would need to be successful without basketball.

“She was the first one to teach me about bank accounts and about credit,” Baker stated. “She was the one who told me eventually the ball was going to stop bouncing and that I was going to need an education.”

With the support of Budkofsky and the team, Baker was able to transcend his tragic injury. He began coaching on the sideline for the Bobcats. Just four years after suffering a tear in his knee cartilage and having to give up basketball, Baker finished his education at Quinnipiac with a bachelor’s in communications and a master’s in journalism.

Baker, who received another master’s degree from Penn State last year, is now the video coordinator for the men’s basketball team at the University of Akron. His accomplishments are all thanks to Budkofsky.

“I was raised by women, and I can honestly say that Alyssa is one of the special women in my life who helped shape me into who I am today,” Baker said. “The way that she impacted not only me, but my teammates, and to do that for all the student athletes is a win. Once I left Quinnipiac, all the things that she instilled in me I try to pass on to all the players and students I interact with… The students at Quinnipiac are in real good hands.”

Now in her 11th year at Quinnipiac, Budkofsky has served as the men’s basketball academic advisor for nine years and was recently the assistant athletic director of business operations.

Though, this semester Budkofsky is settling in to a new position. She was promoted to the associate athletic director of academic support in December.

In this familiar position, Budkofsky charges herself with ensuring that every athlete at Quinnipiac finishes with a degree. Yet, even with all her responsibilities, Budkofsky still finds the time to teach a sports management class.

Budkofsky begins every semester by telling her life story, she emphasizes that the connections she made in college and her effort is the reason she has gotten to where she is today.

Although Budkofsky will tell you she is no athlete, her work ethic is remarkably similar to great athletes. She has put in the long hours of practice that separates her from the rest.

When students and athletes hear her story, it is apparent the level of commitment it takes to be successful in sports and in life, and Budkofsky is living proof.