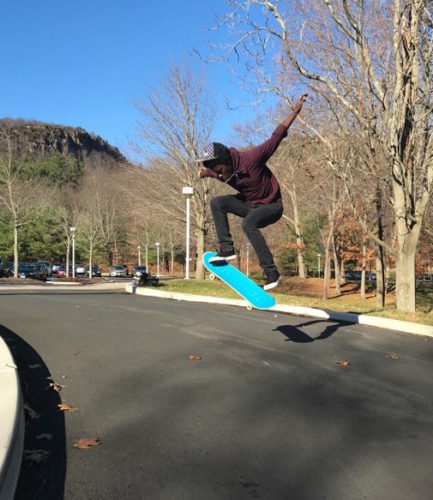 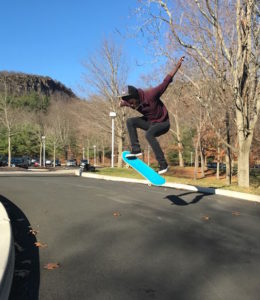 [/media-credit]Walking down Bobcat Way, everyone has probably noticed the man doing skateboard tricks right outside of the Student Center. Students have ogled and gawked at him, not just because he’s out there, but because of how often he’s testing different tricks.

This passion for skating is evident in the sophomore graphic design major, Donovan Brinson from Boston.

His notoriety expands across the whole campus. Students can’t help but notice him outside, day or night, perfecting his tricks. His roommate, biology major Thomas Perry, almost feels like he lives with a celebrity.

“I always point him out like, ‘That’s my roommate’ and everyone’s like, ‘Your roommate’s the skateboarding guy?’” Perry said.

“He’s literally the most popular guy on campus,” Johnson said. “Everyone knows him. You can’t tell me no one has seen him.”

But he doesn’t do it for the popularity. Skateboarding has been a love of his from a young age.

Brinson got his first skateboard when he was in the fifth grade, only knowing how to ride it back and forth.After a while, he put his board aside,  but when his brother died in 2013 from a motor vehicle accident, Brinson started skating again. When a former classmate offered to skate with him during his junior year of high school, he found himself back in the skateboarding scene.

“Learning new things, there is like a determination part of it and once I started, I didn’t want to stop,” Brinson said.

He says he spends a lot of time researching how to do specific tricks. While he is out practicing by Bobcat Lawn, Brinson is perfecting his techniques, but also trying out different combos.

“They’re not made up, because people have done them before,” Brinson said. “It’s just a combination of things, like if you know how to do a kickflip and a shove, you can put them together and varial flip. I just go off of what I see people doing. I look up tutorials just of the basic tricks and like the big flip, which I learned Tuesday. I just put two tricks together and it just happens.”

He draws inspiration from the skateboard group “Braille Skateboarding” on YouTube, which was founded in 2007 by professional skateboarder Aaron Kyro. Brinson’s favorite skateboarder is Chris Joslin, a Real Street 2016 gold medalist and a Plan B Skateboards pro.

On average, he spends about an hour or two a day practicing. That much dedication leaves the question: What is the end goal?

Although Bobcat Nation would love to see one of our own become the next Tony Hawk, Donovan has no plans of going pro anytime soon.

“I’ve never wanted it to get professional,” Brinson said. “When I first started skating, I talked to this guy who lived near my house who knew a lot of tricks and did them really well, and he’s been skateboarding for 12 years. I told myself, ‘If I can get to my goal trick in 12 years, then I’ll be fine with it.’”

So, for us non-skaters, that means he’s going to jump in the air and the skateboard will spin 360 degrees before landing.

Even though he said he would never go pro, he did say he would be willing to enter a skating competition if he “ever got good enough.” 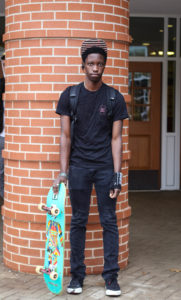 This doesn’t mean that the skill comes easy and without expense. In fact, with the consistent practicing he does, Brinson goes through quite a few skateboards. He even broke one skateboard after only two days of buying it.

On average, Brinson says he goes through a board every six months. He waits for one to break before buying a new one and has now gone through nine boards in the past four years. He even has names for all of his boards including Orchard, Satoshi, Noose and his current skateboard, Victoria.

“The more tricks you do on it, the harder you fall on it,” Brinson said. “It helps if you have good wheels and stuff like that. Bearings help. There are boards that combat rain weather, like carbon fiber, but those are way expensive, so I don’t mess with that.”

Right when he started skateboarding again, while he was practicing on a skateboard he got from Walmart, a stranger walked up to him and told him he needed a better and wider board.

“I reluctantly followed and he gave me one of my official boards that I called Noose,” Brinson said. “I didn’t ask his name. I wish I did because that board helped me out so much. He told me that the board had been around the world.”

It’s the only board he still owns that hasn’t broken.

Brinson once skated in the cold for so long that his fingers went numb and his roommates had to open the door for him, due to the lack of feeling.

“He was in the freezing cold and I remember we had to turn the hot water on,” Perry said. He couldn’t move his hands because he was so cold. That’s dedication.”

That consistent drive that Brinson continues to show by practicing two hours a day pushes him to go back outside daily. That love and passion for what he does challenges any fear of failure.

“Skateboarding in general is 50 percent mind and 50 percent body,” said Brinson. “It’s natural to fear learning new things. The fear is just an obstacle and it is challenging to overcome. At some point of me skating, I just accepted the fact that I will fall and get hurt and my body won’t want to get up. So sometimes I have to degrade myself just to land a trick that I’ve been wanting to land or challenging myself to do the same trick a number of times so I can get into my muscle memory.”

It’s inevitable that he will fall but the adrenaline pumping through his blood and music blasting through his ears make the pain easier to handle. The last trick he learned took him an hour and thirty minutes to land. Quitting is a word that doesn’t seem to fit in Brinson’s vocabulary.

By doing what makes him happiest, he has inspired others to do the same. Johnson believes that because of Brinson, more and more people on campus have busted out their boards.

Brinson shows no signs of stopping and even has plans going for the next twelve years regarding his skating.

“Even when my body may ache or I have a gnarly slam that cuts, I’ll keep skating.”