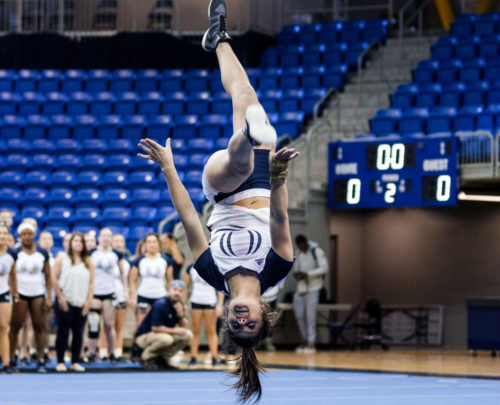 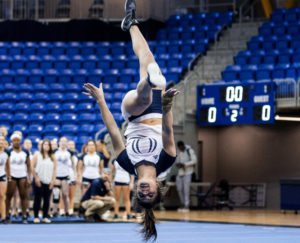 [/media-credit]The Quinnipiac acrobatics and tumbling team lost in its season opener on Sunday to the Baylor Bears by a final score of 282.930-278.055.

“I thought the kids did great,” Quinnipiac head coach Mary Ann Powers said. “I think they gave Baylor a good run for their money and I think they’re overall happy.”

This defeat comes almost four years to the day that the Bobcats (0-1) last defeated the Bears (3-0) by the small margin of .56.

The meet started off on even ground as through the first event, the Compulsory event, which consists of four heats (rounds) consisting of acro, pyramid, toss and tumbling.The final score of the event was gridlocked at 38. After that the Bobcats trailed for the remainder of the meet.

The Acro event finished with a score of 29.55-29.10 in favor of Baylor. The rest followed similarly with the exception of the opening of the second half, the Toss event. The Toss event gave the Bobcats a shimmer of hope as they edged the Bears 29.35-29.10.

The Team Event was one where the Bobcats took the most damage, being ousted by a score of 100.780-97.53. However, Powers says the team remains optimistic.

“If you were to ask them they would say the team routine was a little bit disappointing to them,” Powers said. “They’re going to come back strong, no doubt in my mind.”

Despite losing the opener, senior top Abby Ziser is proud of the effort her team displayed this afternoon.

“I’m very proud of everyone, I think we did very well,” Ziser said. “We worked so hard and I think it showed through all our rounds and I think that we can only go up from here.”

The crowd was very active throughout the afternoon despite the team trailing for most of the meet. Powers accredits this to her team’s character and involvement in the community. 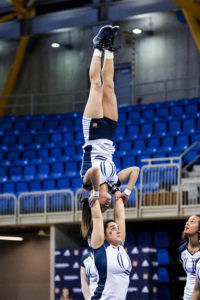 [/media-credit]“I think the fan base is here because these kids do an awesome job of community service,” Powers said. “They want to give back to the fans for the fans coming out to see them, which to me is sort of a shift, the more the merrier.”

On the scoresheet, in terms of individual heats, the two teams were rather close. Out of 19 heats, including the lone heat of the Team Event, Baylor came out with 10 wins to Quinnipiac’s nine. The biggest difference was the point totals.

“Everyone we go against we try to think of as ‘they want to beat us,’” senior base Jenna Adams said. “We go against Baylor just as hard as we’ll go against AB or anyone else…we come for them really hard.”

The Bobcats will travel to West Virginia to take on Alderson Broaddus University on Saturday, Feb. 24. The Bobcats last played the Battlers in the National Collegiate Acrobatics and Tumbling Association (NCATA) playoffs and came away with the victory by a final score of 270.645-264.755.

“I expect really good acro, they’ll be pretty good throughout the acro and everything and they’ll hit us hard in pyramids,” Adams said. “I think in tosses, tumbling, team; we’re going to take them down.”