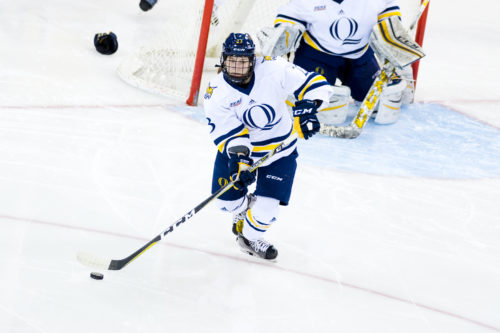 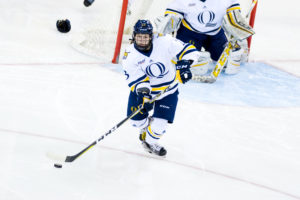 [/media-credit]The Quinnipiac women’s hockey team was blanked on Saturday at Ingalls Rink by Yale on the Bulldogs’ senior day by a final score of 2-0.

“I don’t think we broke the puck out well today, they put a lot of pressure on us and I thought we lost our confidence with the puck,” Quinnipiac head coach Cassandra Turner said. “We really didn’t challenge them, really didn’t possess the puck the way that we can and should and I think that’s on us a little bit and a little bit on how they pressured us.”

That pressure helped to thwart hope for the Bobcats to tie the game up late in the third. A turnover in the neutral zone as freshman goaltender Allison Small, making her second consecutive start, was headed to the bench for an extra attacker led to the goal that would seal the deal for the Bulldogs.

“I think just a miscommunication,” Turner said. “[Small’s] a young goaltender and that’s the first situation she’s been in, in that in college hockey. At that point we weren’t in a position that we played well enough to win the hockey game today, so it isn’t something that she should feel poorly about.”

The game flowed pretty smoothly as there were not too many whistles for icing or offsides and only three penalties were called on the day, one of which the Bulldogs were able to capitalize on as senior forward Emily Monaghan drove it home after it trickled through Small and lay loose in the crease.

The Bobcats will take this loss and look ahead to the playoffs, as they are set to take on St. Lawrence in the first round.

“It’s going to be a battle. Their coach is a ton of fun to play against for us,” Turner said. “Their team, you saw it in their building, it’s fun hockey. No doubt they have some talented players and I know our team is going to come ready to play.”

St. Lawrence has won four out of its last six games and is 2-0 against Quinnipiac this season.

“I think we have a lot more than we brought today,” Turner said. “We certainly will get back to business and ready to attack in the playoffs.”

St. Lawrence and Quinnipiac are set to face off next weekend on Friday, Feb. 23 at Appleton Arena in the ECAC Hockey Quarterfinals in a best-of-three series.