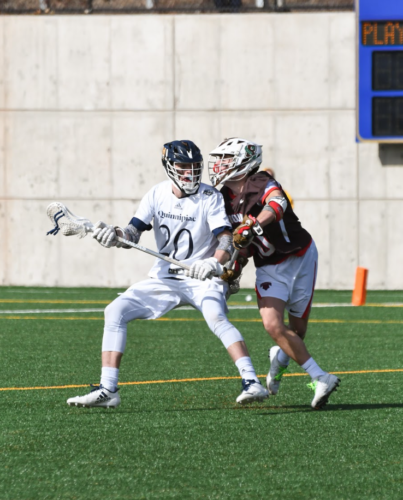 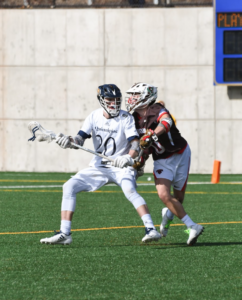 [/media-credit]The Quinnipiac men’s lacrosse team defeated No. 17 Brown 12-11 in overtime on Saturday to pick up its first win of the season.

After last week’s overtime loss, head coach Eric Fekete was elated with the way his team responded against Brown and wants his team to bring the energy consistently.

“I’m so proud of the guys and we said last week there’s a range of emotions from disappointment and despair to the top of the mountain,” Fekete said. “We’ve had a rivalry with [Brown] for the past three years and we wanted to play a 60-minute game and I felt like we did.”

The first quarter was not easy for the Bobcats as Brown scored three unanswered goals to put the Bobcats in a deep hole. The Bobcats committed three penalties in the quarter to give Brown more opportunities with possession of the ball.

As soon as the second quarter began, the Bobcats started to get going with a goal from senior midfielder Adam Bellamy, and carried the momentum with freshman attacker Jake Tomsik scoring two goals in the game, his fifth and sixth of the season.

Fekete expected this type of production from Tomsik and only expects him to get better and better as he develops as a collegiate athlete.

“He’s a special player, has great distribution and sees the field really well,” Fekete said. “He’s also a competitive player and has done a nice job adjusting to the game.”

Junior attacker Mike Fletcher scored four goals in the game and his fourth happened to be the overtime winner. Fletcher now has five goals in two games this season.

Fekete appreciates the demeanor Fletcher shows in big game situations and likes the work ethic he brings to the team.

“He’s a guy who barely played and worked hard on the practice field,” Fekete said. “He’s the type of player that has ice water running through his veins.” 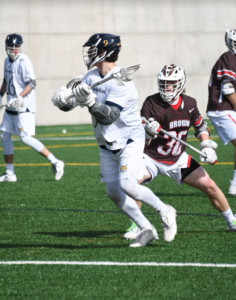 [/media-credit]Fletcher followed up taking the focus away from his performance and giving credit to his teammates for the work they put into the win.

“It was a hard fought game, and we knew we had to go out and play a full 60 minutes,” Fletcher said. “My teammates got me open and left me space to attack the ball on my side.”

Quinnipiac will next take on Vermont (3-0) next Saturday and will look to carry the momentum to try to pick up its second win of the season.

Fekete understands the task at hand they have with Vermont, but wants his team to treat it just like they did on Saturday.

“We’re coming off the lull from last week and we have a good Vermont team coming in here who’s won some games,” Fekete said. “You’re only as good as your last game and we have to come back and get to work.”