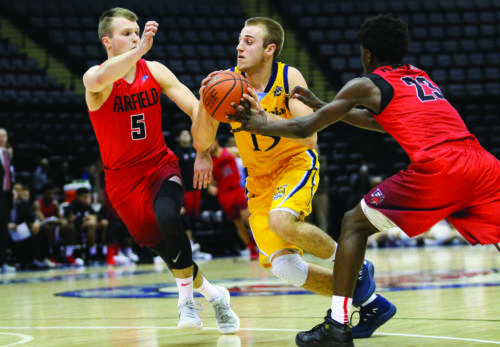 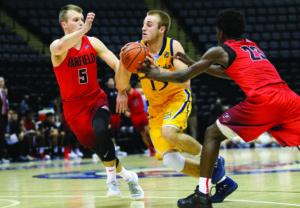 Quinnipiac (10-18, 7-9 MAAC) led by as many as 16 points in the second half, but was unable to seal the deal despite some late-game heroics by freshman guard Rich Kelly.

After trailing 58-44 with just over 12 minutes to play, Fairfield went on a 24-7 run, capped by senior guard Tyler Nelson’s third 3-pointer of the second half. Nelson, who became the all time leading scorer in Fairfield history today, torched the Bobcats for 32 points, 27 of which came in the second half and the two overtimes.

“I think [Nelson] was really good,” Quinnipiac head coach Baker Dunleavy said. “I think our guys certainly didn’t come into the game taking him lightly. Our guys were locked in on him, he was just really good. Sometimes that can happen to you when you play a really good player. Against [Fairfield] when he gets it going like that you have to play close to perfect basketball to win, and we couldn’t do that.”

It was Nelson who gave the Stags an 80-79 lead on a 3-pointer and then buried two free throws to extend the lead to 84-81 with just 14 seconds left in regulation.

However, the Bobcats did not go down easy. Kelly used some nifty ball-handling to weave through the defense and then drilled a fadeaway three with just 2.1 seconds left to tie the game at 84. It was one of many big shots that the freshman hit on his way to a career-high 40 points.

“Definitely just confidence in reps,” Kelly said. “I practice a lot of those shots, I hit them a lot in practice. This year I have not been shooting the ball well, to my standards, but I know I can hit those, so I was comfortable shooting it.”

Quinnipiac found itself behind again early in the first overtime, but it was Kelly with five consecutive points that gave the Bobcats an 89-88 lead.

“I think we all know [Kelly] had it in him,” Dunleavy said. “I think sometimes as a first year player you can go through ups and downs a little bit and if you look just strictly at his numbers you would see a down, but I just think he’s been very consistent in his approach. He’s come to work every day, so this was coming. Not in terms of the exact numbers but just him having a break out game. My hope is that he can carry it forward, and not every game is he going to be scoring 40, it can be getting 15 assists but just taking what they give him and being aggressive.” 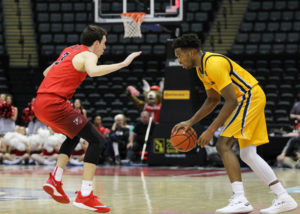 [/media-credit]Fairfield battled back to retake the lead with 22 seconds left on freshman guard Jesus Cruz’s layup. Quinnipiac’s senior guard Cam Young was able to draw a foul on a 3-point attempt with just 9 seconds left, but missed 2-of-3 free throws, leaving the game tied at 92.

Nelson was unable to get a shot off at the buzzer and the game went into a second overtime.

In the second extra period, it was Kelly again making a big play, drilling his seventh 3-pointer of the afternoon to give the Bobcats a 98-97 lead, but Fairfield’s sophomore guard Ferron Flavors Jr. answered with a basket to put the Stags up one with 1:58 remaining.

“It’s good to build on,” Kelly said of his performance. “I can always look back on it for the rest of the season. I’m happy with the way I played but I’m definitely not happy with the outcome right now.”

Quinnipiac had a chance to win it, but it was Nelson who was able to get a steal and a layup with just nine seconds left to seal the game for Fairfield.

“We just didn’t have the habits to get it done for 40 minutes,” Dunleavy said. “It’s probably reflected most in our 22 turnovers. We’ve got to look at the film and really use this week of practice to get better. But again, as always proud of the way our guys fought, it’s difficult task to come into this building, against a really good team, and knock them off.”

The Bobcats got a big contribution from graduate student forward Alain Chigha off the bench in a game where freshman forward Jacob Rigoni went scoreless. Chigha was big defensively as he picked up four steals to go with five points and eight rebounds.

“[Chigha] was awesome. He was the MVP for us overall,” Dunleavy said. “I know [Kelly] had 40, but we were in a bad place before he came in the game and he just sparked us. We built a lead and we were in the position we were in because of [Chigha’s] presence off the bench.”

Quinnipiac struggled to hold the lead after Young, who had 31 points, went to the bench with his fourth foul in the middle of the second half. Still, it’s a game that Dunleavy feels they could have won.

“It was right there in front of us,” Dunleavy said. “We’ve just got to do a better job executing.”

The Bobcats now find themselves tied with Fairfield for sixth place in the MAAC and a half game back of fifth place Manhattan, with just two regular season games to play. They will return home and prepare to take on Saint Peter’s (10-16, 4-11 MAAC) next Friday, Feb. 23, in Hamden.