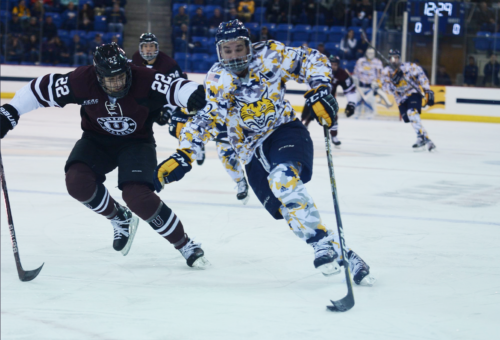 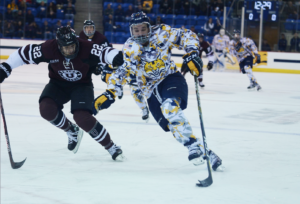 With the loss, the Bobcats stay in ninth place in the ECAC Hockey. It was their fourth consecutive loss to the Dutchmen (19-13-1, 14-5-0 conference), who sit comfortably in second.

Freshman forward Matt Forchuk and sophomore forward Alex Whelan scored the only two goals for the Bobcats (12-15-4, 7-10-2 conference) in the contest, while sophomore goaltender Andrew Shortridge was pulled early in the third period.

Quinnipiac’s struggle to find the back of the net was not due to a lack of opportunity. The Bobcats outshot the Dutchmen 37-18 and often missed the net on premium scoring chances.

“That’s kind of a microcosm of our season,” Quinnipiac head coach Rand Pecknold said. “We struggle to finish and we make a mistake. It’s just been a battle all year with that.”

Quinnipiac also had 19 high-danger scoring chances (shots taken from within 20 feet and between the faceoff circles), while Union had 12.

Although the Bobcats possessed the puck for most of the first period, the Dutchmen capitalized on their first power play opportunity. Greg Campbell let go a wrister that beat Shortridge to take a 1-0 lead.

Ryan Scarfo extended Union’s lead just over three minutes into the second period, tapping in a juicy rebound after taking advantage of broken down defensive coverage.

With under five minutes remaining in the period, Forchuk launched a one-timer from the right point and beat the glove of Union goaltender Jake Kupsky to cut the lead in half. It was the freshman’s second goal of the year. 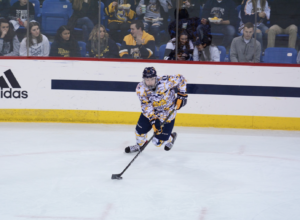 [/media-credit]Quinnipiac started the third period shorthanded for 48 seconds. Immediately after killing the penalty, Whelan zoomed in on a breakaway, deked Kupsky and tied the game at two.

It only took one minute, however, for Union to regain the lead. Anthony Rinaldi beat Shortridge for the goal that ended the goalie’s night, and in turn, the possibility of a win for the Bobcats.

“It was good to battle back from 2-0,” Pecknold said. “It showed a lot of character. Then we went down 3-2 and it was like we were a different team.”

After the game, Pecknold admitted he should have called a timeout after the quick answer.

The Bobcats gave up three breakaways in the third period, including one while on the power play after the Dutchmen made it 4-2. Quinnipiac sophomore defenseman Brogan Rafferty got stripped at the point by Union’s Sebastian Vidmar, who then found Brett Supinski streaking up ice. Supinski beat freshman goaltender Keith Petruzzelli glove side for the shorthanded goal and a 5-2 lead.