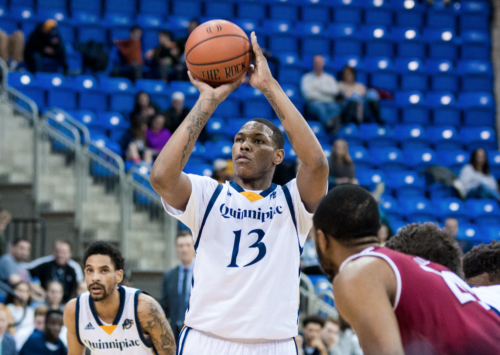 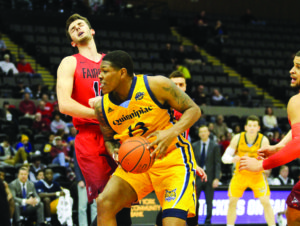 [/media-credit]Putting a ball in a basket. Seems easy, right? Wrong.

Hundreds of men’s basketball players have suited up for Quinnipiac University. Thirty-nine of them have scored 1,000 points, and only 13 have scored those points at the Division I-level. Senior forward Chaise Daniels joined that exclusive club on Sunday with a signature bulldozing layup.

Daniels has made the most of putting the ball in the basket. Even after scoring 1,000 points, Daniels still finds himself standing in an empty gym after practice shooting free throws.

“He’s really attacked any challenge we’ve given him and that’s all you can ask for as a coach,” Quinnipiac head coach Baker Dunleavy said. “Like when you see him working on his free throws extra right now, he’s just been really open to the idea of getting better.”

When he arrived at Quinnipiac in 2014, Daniels had modest expectations. He was playing for former Quinnipiac head coach Tom Moore and a solid team that was coming off a 20-12 season and had high hopes for the year.

“I just wanted to have a good college career,” Daniels said. “When [Moore] recruited me he promised that I would learn a lot playing behind players like Ousmane Drame (‘15) and Zaid Hearst (‘15). I learned from them, I learned the game and then I saw the game in a different light by watching guys that had four years of experience.”

Once Drame and Hearst, and their 14.9 and 18.3 points per game (PPG), respectively, were gone, Daniels had to step up.

“My sophomore year I was a more prominent guy on the team, and then junior and senior year it’s been more of the same,” Daniels said. “I’ve just tried to carry on that [leadership] role and tried to do what’s best for my team.” 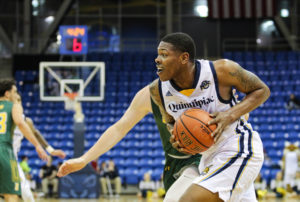 Halfway through his collegiate career, Daniels stood at just 321 points and 1,000 seemed out of reach.

Then, his junior year happened. Daniels had  his most successful campaign, scoring 403 points (13.0 PPG), but the Bobcats again struggled to a 10-21 season. Daniels’ play was one of the only constants through the season, as he scored in double figures in 23 of 31 games.

“If I could be consistent, I knew that would help my team and it would also help me further in my career,” Daniels said. “I’ve tried to focus on longevity. I don’t want to be an inconsistent player. I want to try to improve on my weaknesses and make sure my strengths are sharpened.”

After his best statistical season, Daniels was faced with the biggest challenge of his collegiate career. Moore was fired in March of 2017 and Daniels was forced to play his senior year with a completely new coaching staff and group of teammates.

Seven of the 14 players on the roster either graduated or transferred as a result of Moore’s dismissal, but Daniels decided to finish what he started in Hamden. His new coaching staff, led by Dunleavy, was certainly pleased with this decision and raved about his skillset.

“He’s got a unique instinct and feel for the game for a guy at his size,” Dunleavy said. “He kind of moves like a guard in terms of how agile he is. He’s also got great touch around the rim. So, even when you do a good job [defensively], he can still score from different angles and when he puts the ball on the rim it tends to go in.”

Daniels scored 21 points in a season-opening win over Dartmouth on Nov. 11 and everything seemed to be looking up. Little did he know that less than a month later, things would be turned upside down.

In a loss at Hartford on Dec. 7, Daniels scored five points and only played 13 minutes as a result of a technical and somewhat animated discussion with the usually mild-mannered Dunleavy on the sidelines.

After that game, Daniels decided to take a “personal leave of absence” from the team. He missed three games before returning on New Year’s Day at Siena in a 71-70 win.

“It was rough in the beginning,” Daniels said. “I took my step back from the team to reevaluate things and put things in perspective and get my mind right. It feels good to be back. My teammates were always there for me and I appreciate that 100 percent. Good or bad, they were always there. They showed that they care, not just on the court but off the court.”

While it was the biggest challenge of his career, it has shaped him into a better man, both on and off the court.

“I think he’s made such growth,” Dunleavy said. “Sometimes to make growth, you have to make yourself uncomfortable, and he’s been more than willing to do that. As a coach, I couldn’t be happier with how he’s let me coach him and how he’s let me build a relationship with him.”

Averaging a solid 12.0 PPG this year and standing at an even 1,000  career points as of Feb. 14, he has truly grown. While earlier in his career he might have let the things that have happened to him this year get in his head, he now knows how to swing it positively.

“I’ve learned to channel my energy in a different way,” Daniels said. “I learned to let go of a lot of anger I’ve had. Sometimes it was good playing with some aggression, that fierceness, but sometimes it’s bad because you aren’t the best teammate.”

Over the last four games, Daniels has been playing some of his best ball of the season. He scored 15 in a double overtime loss at Iona on Feb. 2, and has followed that up with three straight games of 12 points. Consistency, as Daniels preached, has been the key. 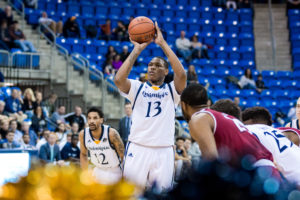 [/media-credit]“He’s certainly improved in tangible areas,” Dunleavy said. “I think he’s a better free throw shooter, he’s in better condition, he’s playing better defense than he ever has since I’ve gotten here, just in terms of his technique, his ability to stay in games and defend without fouling (has improved). Some areas that aren’t necessarily exciting, but some ones that really contribute to winning.”

Daniels’ last and Dunleavy’s first seasons in Hamden has been an up-and-down one. Sitting at 9-17 overall, but a respectable 6-8 in the conference with the MAAC Tournament in Albany looming in early March, Daniels and the Bobcats really only have one thing in mind going into the homestretch.

“I just want to focus on the rest of the season and turn our weaknesses into strengths and finish the season strong,” Daniels said. “Win in Albany, that’s our main goal. Just win in Albany and keep trying to get better.”