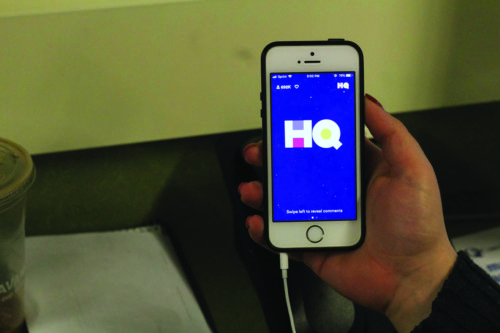 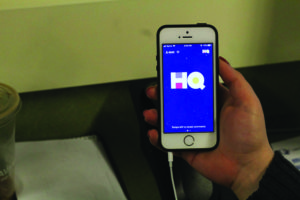 [/media-credit]The HQ trivia app is taking the world by storm. Since Aug. 2017, the 12 increasingly tough trivia questions, the incredibly short 10 seconds to answer and the prize of real money can all be easily accessed by one app on the iPhone and Android.

So, here is how it works.

At 3 p.m. EST and 9 p.m. EST, the HQ trivia app goes live with a few different hosts, but mostly usually HQ resident Scott Rogowsky. He talks for about two minutes and then moves into the trivia part. Each game ranges in prize money from $2,000 to $20,000. Of course, the 1.6 million players tuning in twice each day have the chance to win, but whoever does end up winning will have to split the money at the end of the game.

Also, do not forget how many people play this game. If the jackpot is $15,000 and 3,000 players win, each player gets $5.00. That is, if the player didn’t get glitched out or they answered all of the 12 non-Googleable answers correctly.

Players have 10 seconds to answer each question. If the question is answered wrong, they are out on the first strike. On the other hand, if a player gets all 12 questions right, they win the cash prize. Once someone wins, they connect their PayPal account to the HQ app. This is where they can transfer their winnings to their real account.

If anyone still does not believe this, ask first-class investors.

However, this money is not all for fun and games. The creators are also dealing with a big problem with a variety of investors. Because the co-founders of HQ also founded Vine, investors do not trust that HQ will make it as huge as Kroll and Yusupov plan.

When competitors increased their features to emulate those of Vine, Kroll and Yusupov were not able to compete and make a large enough profit to keep the app afloat. As for HQ, the founders are not working for revenue right now, but instead to gain an audience. All of the money that the investors provide go straight into the prize money for players, according to Time Magazine.

The investors can see that the Vine app did fail, but the same investors can see how interested roughly 1.6 million people are with HQ because they tune into the app twice a day. To put this into perspective, the Super Bowl broadcast on Fox reached 1.7 million online players, according to techcrunch.com.

It seems the popularity of the game has gotten bigger than the idea of the money. With the 1.6 million players splitting money, the money isn’t the most important part for Quinnipiac sophomore Jake Whiting.

“You don’t only get the dollar, but the ability to say you beat HQ,” Whiting said.

However, as for sophomore Marc Andrews, it is more about winning some money.

“It is a free app that I can possibly make money on while having fun,” Andrews said. “Also, Rogowsky is an amusing guy.”

HQ is not going anywhere anytime soon, according to Vox. HQ has now acquired a value of $100,000,000, but how is the app gaining so much attention despite concerns that the game is a scam?

For Andrews and Whiting, the game turns out to be more of a taunt than a fun trivia game. Because Silicon Valley investors have more money than they know what to do with, Andrews and Whiting think more about the money rather than issues within the game.

As for Whiting, the goal of winning the game is why he still plays, not the fun aspect of it. On the other hand, he also get kicked out of the game due to frequent glitches.

Almost every time the game starts, there is a lag. The game freezes and inevitably kicks players out.

Andrews has also been stuck in a glitch during HQ games.

“I usually just give up with the game when the app glitches,” Andrews said.

Although HQ fixed the glitch an hour later, Andrews still got out at question four due to the questions level of toughness increasing.

So, how often to people really win?

Whiting and Andrews have been playing since December, yet have never won.

Many blogs have come out with complaints about the issues of winning the trivia game. Apparently, there is a cheat that allows hackers to automatically beat the game, which is where all of the money is going.

There is an app called QuickTime where you plug your phone into your computer in order for the phone screen to pop up on the computer screen. When Rogowsky asks a question, a player can take a screenshot of the question on the laptop, according to Polygon. Immediately after this, QuickTime scans it into Google before the question 10 seconds are up. Not everyone is playing fairly which is decreasing the rest of the players ability to win more money.

If players crave the idea of winning some money that can range from a penny to $15,000, they should hang out with Scott Rogowsky. As he would say, “Let’s get down to the ‘nitty gritty, quemero numero’ uno.”