Welcome to the brotherhood 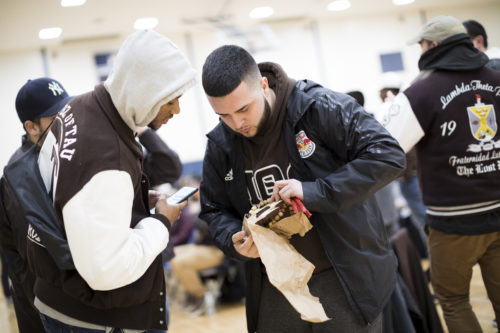 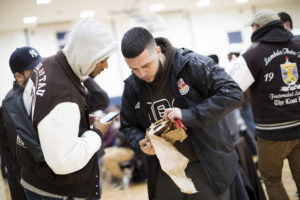 [/media-credit]After months of preparation, Lambda Theta Phi, Inc. is the 11th active fraternity to enter the Quinnipiac community. Lambda Theta Phi is a Latin fraternity that was founded in 1975 at Kean College in Union, New Jersey. It has continued to gain popularity throughout the nation.

On Thursday, Feb. 8, members of the new fraternity held a probate in Burt Kahn Court to officially welcome themselves onto campus.

Kenneth Espinal, one of five founding fathers for Quinnipiac’s chapter, said that the purpose of the probate was to show this campus that minority organizations want to highlight their rich Latin culture and sense of unity as a brotherhood. It is a way for individuals to understand each other on a deeper level because of their cultural similarities, according to Espinal.

During the induction, each member was referred to as a Conquistador, the mascot of Lambda Theta Phi. Along with Espinal, members include Stephen Oliveras, Joel Goncalves, Duchaine Augustin and Bryan Gutierrez. They are the founding fathers of the Quinnipiac chapter. Induction officers, family members, friends and brothers from other universities were all present during the event.

Lambda Theta Phi was founded at Kean College because of racial tensions amongst the Latino community. There was a lack of representation on the campus, as well. Before 1975, no Latin fraternities existed in the United States. Now, there are chapters of Lambda Theta Phi throughout the country and the state of Connecticut, including UConn, Central Connecticut State University, University of Hartford, Trinity College and most recently Quinnipiac.

“In terms of our process, we have to meet requirements by completing events on campus as interests in order to show that we are capable of running a chapter on campus,” Espinal said. “(It is) also to weed out the people trying to join fraternities for all the wrong reasons who aren’t willing to add something useful to the community.”

Lambda Theta Phi has plans for the future to recruit more brothers and to leave behind a solid foundation after graduation. The fraternity also wants to highlight Latino culture and embrace it at Quinnipiac such as hosting events to spread awareness and become more well-known within the community. The process is unlike other rush events on campus for other fraternities, and the founding fathers are hoping it will be a way to spread a new culture throughout the entire campus.

Each member of Lambda Theta Phi joined for the same reasons: brotherhood, community and culture.

“As a minority student who grew up in a minority community, Lambda Theta Phi gave me a sense of home because many of the brothers have lived the life that I live when I return back to the Bronx,” Espinal said. “Also, since there are fewer brothers than there are in every other fraternity on campus, we actually feel like a family because we get to know each other on a deeper level than just being able to say we are a part of the same fraternity.”

Lambda Theta Phi gives all members the confidence to embrace aspects of their lives that may be otherwise lacking at Quinnipiac.

“I think it is a nice new addition to the QU family,”sophomore entrepreneurship major Sigurjon Magnusson said. “It brings to light the diversity of the school. For me, the addition is a good one. I believe that the already existing QU community will be proud and honored to have them as a part of the family.”

The Lambda Theta Phi chapter exemplifies much of what Quinnipiac has been trying to do: spread and embrace diversity amongst all students. This fraternity gives students a way to do that and feel comfortable while doing so.

Members are dedicated to making this fraternity one that will be remembered at Quinnipiac and throughout the nation. The brothers hope to represent the fraternity and the Latino community with pride for now and for years to come at Quinnipiac. They hope to foster the spread of Latin culture and diversity while also becoming a successful fraternity on campus.

The Office of Fraternity and Sorority Life did not comment in time for publication.