Life and teachings of Frederick Douglass honored with statue and exhibit 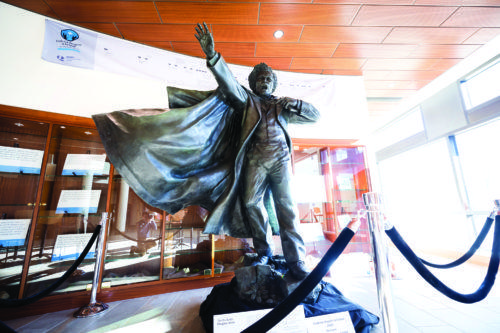 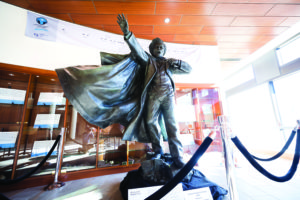 [/media-credit]A statue of Frederick Douglass created by Andrew Edwards stands larger than life and now resides at the Quinnipiac University School of Law.

The Frederick Douglass statue stands over eight feet tall, is made of resin, and was first unveiled on Feb. 1 as a part of the exhibit titled: Frederick Douglass in Ireland: The Black O’Connell; which was made possible by Ireland’s Great Hunger Institute.

The statue was originally in Ireland but has traveled across the United States and finally ended up at Quinnipiac, coinciding with the abolitionists’ 200th birthday on Feb. 14.

Unlike most contemporary images of Frederick Douglass, which depict him later in life, Edwards sculpted the former slave turned abolitionist at the early age of 27; a time when fate would steer Douglass across the Atlantic to Ireland.

In 1845, “Narrative of the Life of Frederick Douglass, an American Slave” was published. This biographical account of Douglass’s harrowing life as a slave and equally challenging journey towards freedom riled elements within the pro-slavery status quo, prompting numerous death threats to the now-famous abolitionist.

With the danger becoming more tangible everyday, Douglass left his native America for a two year lecture tour across England and Ireland.

The Frederick Douglass Exhibit at the Arnold Bernhard Library showcases this historic visit. Douglass’s rousing lectures throughout Ireland and the cultural importance of the visit are told within the various display cases and hanging banners inside the exhibit.

Christine Kinealy, a professor of history in the College of Arts and Sciences and founding director of Ireland’s Great Hunger Institute, discussed the importance of highlighting this historic event.

“Frederick Douglass’s visit was during a time of animosity,” Kinealy said. “But people from different backgrounds, races and ages came together because they all believed in social justice.”

Kinealy went on to talk about how forgiveness was a major tenet in Frederick Douglass’s life and teachings.

“What inspires me most is Frederick Douglass’s ability to forgive,” Kinealy said. “Later in life, he forgave his own master. His master was also his biological father.” 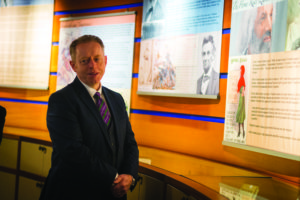 [/media-credit]The professor also elaborated on the importance of Douglass’s message. It is just as relevant today as it was in the mid-1800’s.

“We should come together for the struggle of justice and not allow ourselves to be divided; find the humanity in all of us, what binds us as a people,” Kinealy said. “It’s about the idea that we’re all equal.”

Rebecca Abbot, professor of film, television and media, designed the exhibit’s hanging banners, while Kealy was responsible for the text material.

Ireland’s Minister of State for the Diaspora and International Development Ciarán Cannon visited the Frederick Douglass exhibit on Thursday, Feb. 8, during his tour of the United States. Cannon pointed out the stark parallels between the plight of the enslaved African-American community and the struggle for Irish Independence.

“Daniel O’Connell was advocating for home rule for Irish Independence; for the right of self determination for the Irish People,” Cannon said. “And meanwhile, here was this historic man [Frederick Douglass] arguing the same thing for the African American community here in the U.S.”

Cannon elaborated on how it was so important for Daniel O’Connell and Frederick Douglass to speak out on behalf of oppressed peoples everywhere.

“The very fact that they were out there, advocating for self-determination and doing so in such an eloquent and articulate manner shattered any (derogatory) stereotypes,” Cannon said.

Cannon is hopeful that we will be able to learn more from the Frederick Douglass exhibit moving forward, but believes that people don’t always learn from their past.

“If you look at the mass persecution and mass migration of peoples that are going on, one might argue we haven’t learned very much from our history, and that’s a problem,” Cannon said. “Unfortunately, there aren’t too many Frederick Douglass’s in the 21st century.”

“Frederick Douglass is pretty inspiring. His writings are what we should be focusing on,” Brosnan said.

“People tend to forget that the turmoil of slavery and civil war and even the Irish struggle for independence had a lot to do with economic factors,” Brosnan said. “When times get tough, people usually step on other people.”