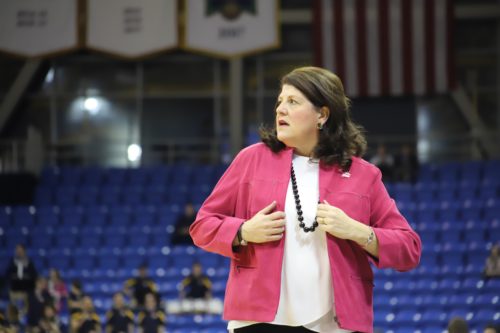 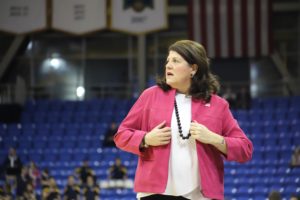 [/media-credit]Tricia Fabbri had herself a week.

It started last Sunday, when the southern New Jersey native watched her local Eagles win the first Super Bowl of their existence. Prior to the big game, when Fabbri’s Bobcats had a contest of their own against Iona, the 23-year head coach sported a forest green “Go Birds” shirt on the sidelines to support her beloved underdogs.

Fabbri could have gone all-out and added a rubber dog mask that are flying off the shelves in Philadelphia, but the underdog label just wouldn’t fit her Bobcats this season, who won their 16th-straight this past Sunday, exactly one week after the Eagles bathed in white and green confetti.

The Bobcats’ 63-52 win over Siena was also the 400th of Fabbri’s already remarkable coaching career, and provided Bobcat Nation with some valuable time to reflect on the Fabbri’s ever-evolving legacy, and where she stands among the greatest coaches in Quinnipiac history.

Sometimes, winning happens with such ferocious frequency that it becomes expected. Fabbri’s 400th win was also the Bobcats’ 21st of the season, marking the seventh-straight year that the Bobcats have won at least 21 games. It was also the 13th time in 15 conference games that the Bobcats have won by double-digits. The 11-point win actually felt like a nail-biter, given the Bobcats’ current average margin of victory over MAAC opponents, which currently stands at an absurd 23.3 points per game.

The Bobcats may have donned the underdog identity last March during their improbable Sweet 16 run, but those around Hamden know better. The women’s basketball program under the watchful eye of Fabbri has been steamrolling the MAAC for years, and Fabbri’s 400th win provides another landmark on how far she has carried the program that is building the foundation of a dynasty.

”It’s nice,” Fabbri said of her monumental accomplishment. “You do this long enough, and you’re around 23 years, something like this I guess is supposed to happen.”

Fabbri’s humble assessment is obviously subdued. Winning as much as she has takes far more than simply being around. After starting Quinnipiac’s Division-I tenure with a 37-37 conference record over four seasons, perhaps Fabbri could have settled for mediocrity and just hung around for awhile. Instead, she launched the program to unprecedented heights, advancing to a pair of WNIT appearances before making the big dance for the first time in 2013 thanks to an 18-0 record in the Northeast Conference, the Bobcats’ final season in the NEC before moving to the MAAC, where they currently rule with an iron fist.

“Coach is gritty,” former Bobcats star Adily Martucci (‘17) said. “Her passion and perseverance over a long period of time is what made this program what it is today. Her relentlessness to never give up has brought her this far, and she will continue to go even farther because of this. I believe whole-heartedly that our team’s identity starts with the head and works its way down.”

Martucci spent five seasons under Fabbri, and is the owner of arguably the most important shot in Quinnipiac basketball history. Her corner three in the final minute of the second round of the NCAA Tournament last season stunned No. 4 seed Miami on its own floor and catapulted the Bobcats into the national spotlight, where ESPN and numerous other news outlets branded the Bobcats as the endearing underdogs.

If only they knew.

“Not too many people were talking much of Quinnipiac,” Fabbri said of the atmosphere surrounding the team prior to the start of the NCAA Tournament. “But here in the [MAAC], we’ve been seeing everyone’s best shot. People are excited to see us come to town and see their teams give us their best. We’ve proven ourselves to be a worthy number one in our conference.”

Of course, this historic run by Fabbri has been much more than a ruthless reign over her conference opponents. The opening act of the Fabbri era was littered with losing seasons, five-straight to be exact. From a 2-23 record in her first season as head coach to just 25 losses over the past four seasons, it’s hard to locate a time during Fabbri’s coaching career where her team wasn’t improving.

“The school was undergoing some big changes,” Fabbri said when thinking back to her beginnings as a Bobcat, when the university was making the transition to Division-I. “There were growing pains. But we’ve made incredible strides. A foundation had to be built, and that took a few seasons. We had to crawl before we could walk.”

The days of losing seasons appear to be in the rearview mirror for Fabbri, but more than once did the Bobcats appear to be poised for a setback before their leader stepped in, especially heading into the 2015-16 season.

After the Bobcats won 31 games and a conference championship in 2014-15, Fabbri looked around her locker room and saw little experience. Five seniors, four of whom were selected to the All-MAAC Team, had been lost to graduation. Martucci was among those left from the dominant 2015 run, and quickly realized Fabbri wouldn’t accept regression. She was looking to somehow improve.

“Coach knew that we were upset people didn’t think that we would be as successful,” Martucci recalled. “It forced a desire to prove people wrong. She took an approach using tactics like reminding us that our seniors weren’t here to help us. Coach knows how to light a fire in us to get us pissed off for greatness. She knows how her players work and what they respond to.” 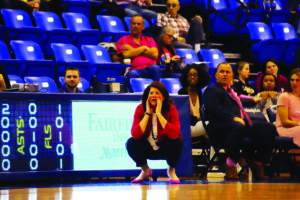 [/media-credit]Two years, one Sweet 16 banner and one commemorative bobblehead later, and not much has changed. The Bobcats were navigating through a brutal non-conference schedule earlier this season when their leading scorer Sarah Shewan went down with a season-ending ACL injury against Richmond. Starting guard Vanessa Udoji suffered an identical fate in the same game.

“That night was horrible for everyone,” junior guard Edel Thornton said of the critical injuries. “But it was incredible for me to watch [Fabbri] because she didn’t react badly or anything. She kept optimism for us. She knows the balance of when to push you out of your comfort zone and making sure you’re okay mentally.”

Without two of her most productive scorers, Fabbri has led the Bobcats to an 18-2 record since the injuries to Shewan and Udoji, including a flawless conference record.

By now, it’s hard to expect anything less. Over two decades of winning can have that effect. Still, 400 wins provides a time to appreciate Fabbri’s impeccable ability to keep winning. As the men’s ice hockey program suffers through their second-straight season of frustration after its Frozen Four run in 2016, and the men’s basketball team begins its all-out rebuild, Fabbri and her Bobcats stand grounded, unshakable through the changing climate around the TD Bank Sports Center. No matter who graduates, suffers an injury or begins to struggle, the wins continue to pile on for the winningest coach in program history, who refuses to stand in the spotlight alone.

“It’s these outstanding young ladies,” Fabbri said of her ability to produce a consistent winner no matter the circumstances. “Credit to the staff and the players that are ready to make the most of an opportunity when their moment comes.”

While the humble and hungry Fabbri has been a fixture at Quinnipiac for over two decades, it is important to remember that win number 400 is a result of unparalleled greatness, not just longevity. Fabbri may deflect the credit elsewhere, but the numbers and banners speak for themselves.

With her 400th win secured, the maintenance crew at Lender Court should start making room for another banner.