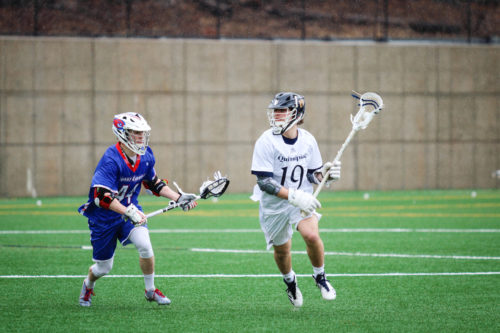 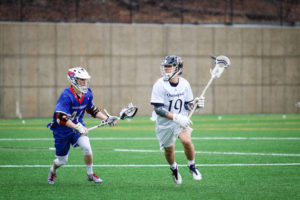 [/media-credit]The Quinnipiac men’s lacrosse team lost in overtime to UMass Lowell by a final score of 13-12 in its season-opener on Sunday.

The goals were coming with as much force as the rain falling as there were eight multi-goal scorers in today’s game, three for the Bobcats (0-1, 0-0 MAAC) and five for the River Hawks (1-0, 0-0 America East).

“Happy with my performance I guess, but I had two or three turnovers too,” Tomsik said. “Could’ve been two or three goals that would’ve won us the game.”

Turnovers hurt the Bobcats as they committed 19, almost doubling that of the Hawks. This included two key turnovers by senior goalie Carson Cocco, whose two turnovers to Tyrrell turned into two goals for the Hawks, one of which tied the game with just over a minute remaining in regulation.

“He’s gotta be better, I mean the turnovers on the clearing game,” Quinnipiac head coach Eric Fekete said. “You gave two up right to the other team. It’s a team game I’m not going to blame him, but it’s substandard performance, you have to be better.”

“There’s some penalties you take that are in the course of the game and they happen and you accept them,” Fekete said. “The ones that are undisciplined and stupid that you just don’t have time and it was a confluence of a bad time and place and a really bad penalty.” 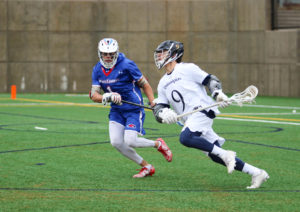 [/media-credit]The Bobcats finished the first quarter with a 5-1 lead, and were up 7-3 at the half. They were outscored 10-5 throughout the rest of the game, including overtime.

“When momentum swings we need to get better at dealing with adversity and staying on track,” Tomsik said. “Once they start scoring that’s when the real test comes in and we folded.”

According to Fekete, the Bobcats need to work on finishing and playing a full 60 minutes of lacrosse.

“There’s 60 minutes in a game and there’s probably honestly five that make a bit of difference, a big difference in the 55 you gotta navigate through,” Fekete said. “In those scenarios we probably played one of those five crucial moments well and the other ones we fumbled and that’s just a recipe for a disaster”

The Bobcats look to get regain some momentum and rectify their collapse when they take on Brown next Saturday, Feb. 17, in Hamden.