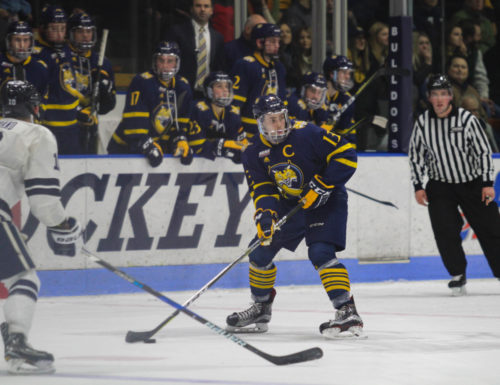 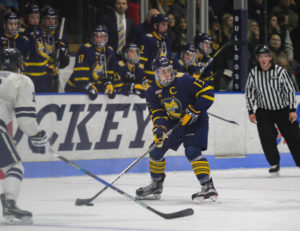 Tonight, that streak was broken.

For Quinnipiac it came down to a matter of bounces and temporary defensive lapses that ultimately dictated the game’s final score.

“I think we hit eight posts,” Quinnipiac head coach Rand Pecknold said. “24 years [and] I can’t remember hitting that many posts in a game… So it’s just one of those things.”

The other notable “thing” to happen occurred during a short span towards the end of the second period in which the Bobcats gave up two goals in three minutes, both coming off the stick of Yale’s Ted Hart.

“We preached it all year, ‘You’ve got to play a solid 60 minutes,’” junior defenseman captain Chase Priskie said. “We let up for 10 minutes in the second period and they capitalized on that.”

The other 50 minutes of this game were generally positive for the Bobcats.

After Yale’s Billy Sweezey opened the scoring at 11:32, Quinnipiac dominated the latter half of the first period and early parts of the second on the man-advantage.

After Yale’s Robbie DeMontis took an interference penalty with 36 seconds left in the period, Quinnipiac’s first goal came off of junior defenseman Brandon Fortunato’s stick. From the bottom of the offensive zone circle, Priskie put the puck on Fortunato’s tape, who made no mistake putting the puck into the back of the net for his third of the season.

Then 30 seconds into the second period, Sweezey took an interference call of his own to put the Bobcats back on the power play. 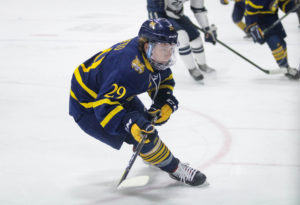 Tufto’s goal was his eighth of the season, gave him his 12th multi-point game of the season (after an additional assist on Fortunato’s goal), boosted his NCAA-leading freshman points total (33) and most importantly gave the Bobcats a 2-1 lead.

While the scoresheet shows that the Bobcats ended the night 2-for-6 on the man-advantage, they scored both of their goals on the power play and heard a lot of pucks hit iron.

“We had tons of chances,” Pecknold added. “I thought the power play was great tonight, but sometimes the puck just doesn’t go in for you.”

Once Quinnipiac had the lead, it seemed complacent defensively and lacked the urgency it shows when down. That brief change of pace cost the Bobcats as Hart scored his two goals in three minutes.

Despite a scoreless third period, the crowd of 3,500 remained animated throughout the contest.

Quinnipiac freshman goalie Keith Petruzzelli stood out in the final period of play by making 13 of 13 saves (27 saves on 30 shots total). Most notably, he robbed Yale’s Charlie Curti with his glove-hand to keep the game close and the fans on their toes.

With just 2:04 left in the game, freshman Joe O’Connor drew a penalty after the whistle to set the stage for a wild finish.

With Petruzzelli pulled, the Bobcats had a 6-on-4 advantage, but the closest they came was when Priskie beat Tucker, but hit another crossbar with 30 seconds left in the game.

Tucker and the Bulldogs clung onto their one goal lead and beat the Bobcats 3-2. 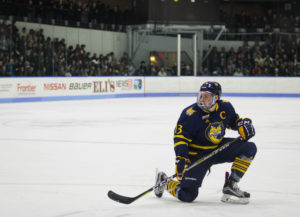 Next up, Quinnipiac travels to Brown on Saturday for another all-important ECAC Hockey showdown.