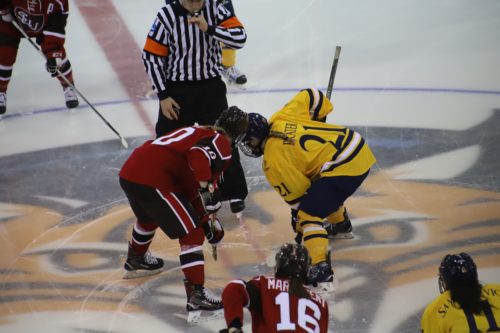 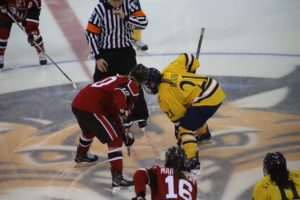 Sophomore winger Sarah-Eve Coutu-Godbout scored her sixth goal on the season for Quinnipiac, while junior Nadine Edney had the lone goal for the Saints, her eighth.

It was a defensive showcase from both sides, as sophomore goaltender Abbie Ives finished with 23 saves for the Bobcats, while her opposer, junior Grace Harrison, finished the night with 18 saves.

“It was a fun hockey game today,” Quinnipiac head coach Cassandra Turner said. “Playing St. Lawrence is always a lot of fun. It’s impressive to see hockey that is that entertaining and yet you’re wondering when the last shot will be. I think that about sums up the entire game.”

Coutu-Godbout got the scoring going early on, just 6:01 into the game. Freshman Brooke Bonsteel worked against a St. Lawrence defender down below the goal line, but got her stick tied up. While working against the defender, she was able to use her skate and kick the puck to an open Coutu-Godbout on the backdoor, who made no mistake of firing it past Harrison for the early 1-0 lead.

However, with 3:40 left in the first period, Kennedy Marchment was able to find Edney in front of the net and Edney shot the puck over the glove of Ives to tie the game at one. The assist gave Marchment her team leading 33rd point, good for fifth overall in ECAC Hockey. 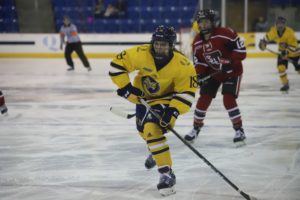 [/media-credit]That would be all the offensive action from either side for the rest of the game, as the defense dominated the rest of the way, ending the game in a 1-1 tie. Each team’s defense came up big when they needed it, as St. Lawrence had 13 blocked shots and Quinnipiac had 11.

“I thought our (defense) did a great job of playing stick on stick hockey,” Turner said. “They really worked to pressure quickly and help out each other when they needed to. When someone got beat, they were there to help, and if they weren’t, [Ives] was there for us today.”

Ives certainly made her presence felt throughout. She made multiple key saves throughout, including robbing senior defenseman Amanda McClure in the first period on a point-blank shot from the top of the crease. However, Ives was able to slide off the post and make a pad stop.

“[Ives] made some saves today that were probably pretty hard look routine and easy,” Turner said. “That’s what we like to see.”

With the No. 1 ECAC Hockey team Clarkson coming to Hamden tomorrow, Turner described the locker room as “excited.”

“We’re playing a Clarkson team that we’ve beat this year,” Turner said. “They’ve only lost a couple games all year and one of them was to us, so there’s no question that they’re going to come ready to give their best game to us.”

Quinnipiac will face off against the Clarkson Golden Knights (26-4-1 overall, 16-3 ECAC Hockey) at 3 p.m. tomorrow Saturday, February 10 at the Frank Perrotti Jr. Arena in Hamden.