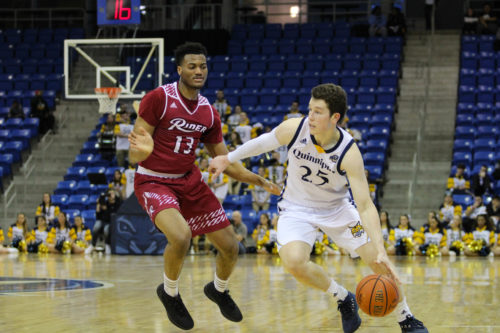 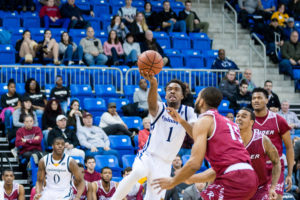 “We had our work cut out for us this game,” Quinnipiac head coach Baker Dunleavy said. “I think record wise [Rider is the] top team in our league and deservedly so. They’re a talented group, came in here and really played their way. I think we did at times a good job, the second half we battled back, but to beat a team like that, to be in it with a team like that, you have to bring your ‘A’ game, and we just didn’t have that.”

Rider (17-7, 10-2 MAAC) went 11 players deep in this one with nine different players scoring a point and four of them in double figures. The Broncs got a big game out of sophomore guard Stevie Jordan who had 18 points on 7-for-11 shooting. It was Jordan’s 3-pointer with 7:49 to play that put the Broncs up by eight and derailed Quinnipiac’s comeback effort.

After cutting the score to 50-47 on an and-one by senior forward Chaise Daniels, Rider closed the game on a 24-12 run. Jordan and redshirt freshman guard Dimenicio Vaughn both hit big 3-pointers down the stretch.

“I think when you dig yourself a hole, it’s exhausting coming back,” Dunleavy said. “I think mentally and physically we probably just didn’t have that many minutes in us in the second half to keep that up. Like I’ve said so many times, I’m proud of our guys for being able to come back but there’s no moral victories here. I think we’ve built ourselves into a team that expects to play better than that. We fully expected to come back in the second half, and we didn’t.”

The Bobcats struggled on the offensive end, shooting just 39.2 percent from the floor and turning the ball over 20 times. The turnovers were the second-most for the Bobcats this year, as Daniels and senior guard Cam Young turned the ball over a combined 12 times.

“I think the physicality and the pressure they put on us both games, I felt we were just not strong with our decision making with the ball,” Dunleavy said. “Different style defensively than were used to, wish we would’ve had a little more time to prepare for that. But, we just need to be stronger a little tougher with the ball and more decisive.”

Young, Daniels and freshman forward Jacob Rigoni all scored in double-figures for the Bobcats. Rigoni opened the game 3-for-4 from 3-point range, but was just 1-for-5 the rest of the game, en route to a 4-for-13 shooting day from the field. 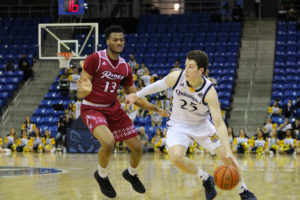 [/media-credit]Rigoni attributed the off night to Rider’s ability to run him off the 3-point line every chance they got.

“It’s obviously tough,” Rigoni said. “Not the greatest situation to be in but we felt comfortable going into the game that we recovered.  We were prepared to go into battle but unfortunately we weren’t tough enough today.”

Dunleavy is hopeful that Robinson will be back for the team’s upcoming road trip.

“Just day-to-day, I would expect [Robinson] to be good for the trip,” Dunleavy said. “I can’t say for sure, but no structural damage, just swollen and hard to put pressure on it right now.  But I hope that we can have him back for Thursday [at Niagara].”

Quinnipiac will look to rebound at Niagara Thursday and get back over the .500 mark in conference play.