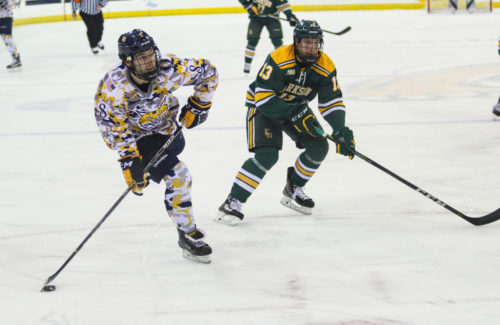 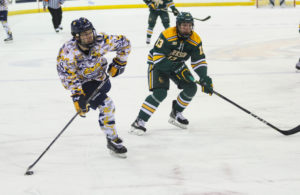 After suffering a 5-3 loss Tuesday against Princeton, the Bobcats answered with a win that not many people saw coming, knocking off one of the top teams in the ECAC Hockey.

“I thought it was a great win tonight,” Quinnipiac head coach Rand Pecknold said. “Playing the No. 3 team in the country, that’s an excellent hockey team. I’m really impressed with them this year, but it was a tough test for us. I thought the battle level was great.”

Quinnipiac (10-13-14, 5-8-2 ECAC) jumped out to a quick lead early in the first. After freshman goalie Keith Petruzzelli made a pad stop on Clarkson’s Jack Jacome, senior forward Tanner MacMaster took the puck end-to-end and beat Jake Kielly blocker side with a shot just two minutes into the game to give the Bobcats the early edge. The goal was Macmaster’s 12th on the year.

The score would remain 1-0 into the second period until freshman forward Odeen Tufto tapped in the puck from a smooth passing play from linemates sophomore forward Nick Jermain and MacMaster. MacMaster slid the puck across the ice and Jermain played the puck off the wall, finding Tufto backdoor with a wide open net. MacMaster is now riding a four-game point streak, while linemate Tufto now has a three-game point streak.

“Our line is playing really well,” MacMaster said. “Jermain came onto our line and we’ve built that chemistry. I think we all attribute to each other’s games and I think things have just been working out.”

Clarkson then proceeded to crank up the intensity. After Petruzzelli denied Josh Dickinson on a breakaway attempt, less than a minute later, Devin Brosseau slammed in the rubber after a scrum in front of the net. The goal would be reviewed, however, and ruled that there was too many men on the ice for Clarkson, so the goal was rescinded.

“I thought the call was there, and they made a good call,” Pecknold said. “But you never know when they go back to review things.”

A swing in momentum would occur with less than a minute left in the second when sophomore forward Alex Whelan used his speed to go around a Clarkson defender and then used his shot to go top shelf over Kielly’s glove hand to extend the lead to 3-0 with 42.2 seconds left in the period.

Down 3-0 going into the third, the Golden Knights finally cracked Petruzzelli with a power play goal from Kevin Charyszyn near the halfway point in the period. After successfully killing off two previous penalties to the ECAC Hockey’s top power play team, Quinnipiac bent just a bit, as Charyszyn knocked in a rebound goal to cut the lead to 3-1. 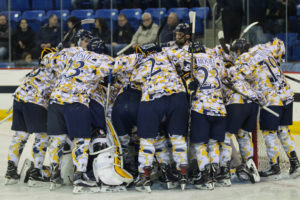 [/media-credit]But that was all that Clarkson was able to get, as junior defenseman Brandon Fortunato would add an empty-netter in with five seconds left to seal the victory for the Bobcats. Petruzzelli led the way with 25 saves, securing his second win of the season and first win at home.

“[Petruzzelli] is a fantastic goalie,” junior defenseman captain Chase Priskie said. “When he just plays his game, he’s calm and handles the puck well, and it’s just hard to score on him.”

After Pecknold was displeased with the effort against Princeton, he had much to praise about his team tonight.

“We didn’t play perfect, but the battle level was excellent,” Pecknold said. “I think probably the biggest thing tonight was the passion and the guys were really excited to play a top five team in the nation. If we can bottle that and play like that every night, we’re going to be a good hockey team.”

Quinnipiac will be back in action tomorrow night, Feb. 2, at 7 p.m. against another ECAC Hockey opponent in St. Lawrence.