Runnin’ the Point: Trust the ‘progress’ 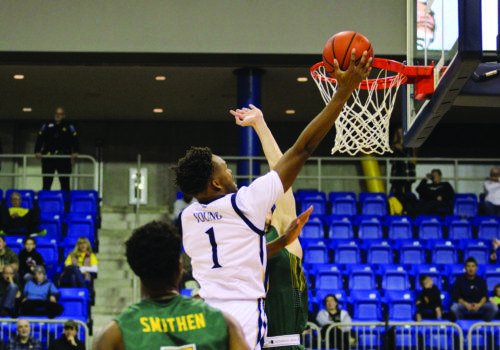 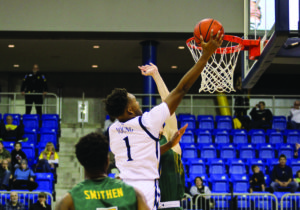 [/media-credit]Progress was the word of the day for Quinnipiac head coach Baker Dunleavy after another huge MAAC win over Fairfield on Saturday.

“All of our guys deserve credit for (the defense),” Dunleavy said. “As a coach it’s fun to see the progress. We’ve got to get back to work, rebound the ball, press offense, and some other areas, but defense has got to be the core staple of our program so to see it progress is very satisfying.”

After the 75-70 win, it was clear that Dunleavy was enthusiastic about one specific area his team has been improving on — defense.

Last week, I wrote about how defense wins games and was the key for the Bobcats going forward. That showed more than ever in Quinnipiac’s two wins this week over Marist and Fairfield.

The magic defensive number of 77 was back on display. To reiterate, going into this week Quinnipiac was 5-4 this season when allowing 77 points or less, but just 2-9 when they give up more than 77.

On Thursday, it was a 85-77 road win over Marist. Saturday was a 75-70 win at Nassau Coliseum in Uniondale, NY against Fairfield. That makes the Bobcats 7-4 when allowing 77 points or less.

“I think our defense has been something we’ve been stressing over the last two weeks and I really believe in the progress,” Dunleavy said. “I think (Fairfield’s) an excellent offensive team, they just put 108 points on Niagara and that’s a really good team. We know what they were capable of offensively and so for us to produce defensively the way we did was incredible.”

A key component in this recent stretch of good defense basketball for Quinnipiac has been the emergence of graduate student guard Isaiah Washington as the team’s primary defensive stopper.

Against Marist, Washington was tasked with locking up guard Brian Parker, who averages 18.0 points per game (PPG). Parker fouled out in 26 minutes and finished the game with 12 points on 2-for-8 shooting and three turnovers.

Saturday’s matchup with Fairfield and MAAC-leading scorer Tyler Nelson (21.3 PPG) was perhaps the toughest of the season.

“Our goal was to make him uncomfortable,” Dunleavy said. “We knew we could do a great job and he would have 20. So, I think we made him a little uncomfortable, a little bit rushed and that’s the best thing you can do against a player of his caliber.”

FINAL: Quinnipiac 75, Fairfield 70. Fairfield goes to Nelson for the shot to tie it but he rims out. Quinnipiac improves to 6-4 in #MAACHoops and 9-13 overall pic.twitter.com/oywTZJcLBc

Nelson didn’t come close to scoring 20. He ended with 13 points on just 4-for-18 shooting and 1-for-8 from deep. It was Nelson’s lowest scoring total since Nov. 26 and his third lowest of the year.

“I think (Nelson) probably had some open looks that he would normally make because he’s a great player,” Dunleavy said. “But between Isaiah Washington primarily, (junior guard) Aaron Robinson and then (senior guard) Cam Young towards the end, I think our guys really chased him around the court.”

In addition to his defense on Nelson, Washington was vital in Quinnipiac taking and maintaining the lead early in the game. Fairfield led 17-10 eight minutes into the game before a Washington 3-pointer started a 19-2 Quinnipiac run. The Bobcats didn’t trail for the rest of the day.

“Coach talked a lot about focusing on defense and letting your offense come to you,” Washington said. “I knew what a big part of what they do was through him, so I tried to, like coach said, sacrifice myself for the team on defense and the shots just kind of came.”

Washington finished with 11 points, all in the first half, on 4-for-8 shooting, 3-for-6 from downtown.

Another bright spot going forward, one that is critical in Quinnipiac sustaining its 6-4 start in MAAC play, was the bench production. The bench has been extremely consistent over the course of this three-game winning streak, scoring 20, 21 and 21 points in the games.

The best part for Dunleavy, in regards to his bench, is that it’s not always the same guy leading the second unit in scoring.

Senior forward Chaise Daniels had 17 points off the bench in the win over Siena on Jan. 21 and 10 in the win over Marist. Junior guard Andrew Robinson had six points against Marist and 14 against Fairfield. Aaron Robinson has also scored in each of the three wins.

Andrew Robinson (@_itseazyy) with another three to extend the lead. He has 8 points and 5 rebounds. Been really solid off the bench for QU the past few games. pic.twitter.com/FgmyeK0bmf

“Our guys stepped up, took what was there, [Andrew Robinson] ended up with some really good looks, and he’s a terrific shooter,” Dunleavy said. “All of our guys are always ready to make those contributions. I would just say that they were ready, I’m proud of them for that, and they’ve just got to stay ready.”

This win streak has elevated the Bobcats to fifth in the MAAC standings after being picked to finish last (11th). They are two-and-a-half games out of first place, but just four games out of last. The MAAC is a wide-open race.

With its next four games against the four teams ahead them in the standings (Iona, Rider, Niagara and Canisius), Quinnipiac will face its toughest test of the season.

“All we’ve talked about the whole year is progress, and I think progress is reflected in our record, I think we’re on a three-game winning streak, so that’s reflected in that,” Dunleavy said. “But we’re getting better and as a coach that’s all I can ask for. Of we keep doing that every day, I think we’re going to like where we are going to be at the end of the year.”