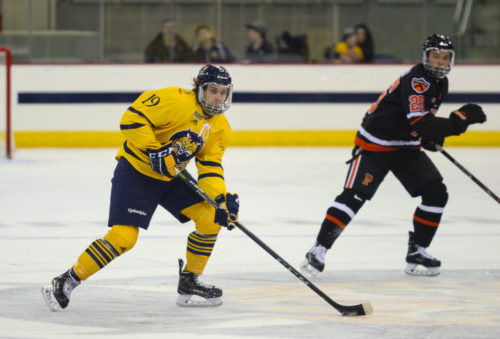 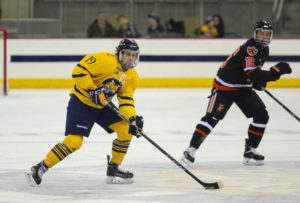 [/media-credit]The Quinnipiac men’s ice hockey team fell to the Princeton Tigers 5-3 on Tuesday night in the first game of a nine-game ECAC Hockey slate to close out the 2017-18 season.

The matchup was the Bobcats’ first home game since Dec. 9, and they have not won at home since Nov. 18.

Quinnipiac head coach Rand Pecknold singled out the three penalty kill occasions which resulted in three Princeton goals as the root of a big-picture issue for the team’s poor performance.

“I don’t know if it was the second or the third (penalty kill), (but) we had three guys running around, like we know how to penalty kill, and we had seniors on the ice and older guys that have had a lot of reps at it and I really don’t know what they were doing,” Pecknold said. “And Princeton has a good power play, but they shouldn’t go 3-for-3 against us. We’ve had a good year on the (penalty kill) as always. So that was just disappointing.”

To Pecknold’s point, two out of the three penalty kill lineups which were scored upon were manned by seniors Tanner MacMaster, Kevin Mckernan and Kevin Duane, and sophomore defenseman Karlis Cukste.

“I’m embarrassed at how poorly coached we were tonight. Our buy-in was unacceptable. I think when you play the game of hockey you have got to have your best players, what they do and the actions they take, it permeates through the team,” Pecknold said. “It’s frustrating because some of these juniors and seniors have been here before and they’ve been on those Frozen Four teams and they don’t care as much as they used to. We need to get that hunger back.”

Tonight’s penalty kill effort, or lack thereof, is a microcosm of the game the Bobcats had against Princeton.

In the first period Quinnipiac was able to battle back-and-forth against a Princeton team that came hot out of the gates, and put up 20 shots in that period.

The Princeton attack, which consisted of meaningful side-to-side passing, was able to unlock the Bobcat defense early on.

Just five minutes into the game, Princeton was rewarded by its movement with a goal from senior forward David Hallisey who had a wide-open shot in front of the net protected by Bobcat freshman goalie Keith Petruzzelli. 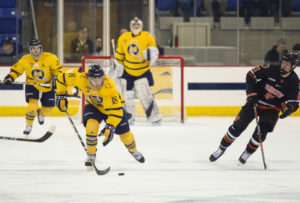 [/media-credit]Even though the Bobcats came back with multiple answering goals in the first period from sophomore forward Nick Jermain and junior defenseman Luke Shiplo, the scoring was not sustained in the coming periods against a stout Princeton back line.

The second period came and went with a changing of the tides for the surging Tigers.

With just five minutes left to go in the second period, a power play for the Tigers allowed a streaking Josh Teves to slice straight to the net, unscathed and flick the puck with his backhand into the back of the Quinnipiac net to knot the game at two.

In the third period, Princeton was able to follow up its second period tying goal with another strong cut towards the net that also resulted in a go-ahead Princeton goal. It would be the first of three goals that Princeton scored in the final frame.

“We get into any type of adversity and we panic, whereas, I think our teams of the last seven years thrived on adversity,” Pecknold said. “We’d get into adverse situations and we thrived on it, we attacked it, and not only would we handle it, but we’d win because of it. It’s just been a battle issue with our confidence and we need to play better, that’s the simplest way to put it.”

The Bobcats would again falter just 63 seconds later, allowing a two-on-one Princeton break in which a clean pass from Max Veronneau, who had four assists on the night, set up his teammate Ryan Kuffner for an easy score.

With just 16 minutes left in regulation the Bobcats would not be able to surmount the two-goal deficit and eventually fell in regulation 5-3 after a late empty-netter.

“I didn’t think our compete was very good tonight and that’s disappointing, that’s a trademark of us, we should be ready to go and be hungry,” Pecknold said. “I thought the coachability for a good chunk of our guys was poor. Guys just aren’t buying in, so it’s been frustrating, we don’t have the depth to sit those guys. Our depth is being tested a little bit and I think in other years we would sit those guys and they would learn.”

The Bobcats fall to 9-13-4 and will take on Clarkson University on Friday, Feb. 2 at their home arena.