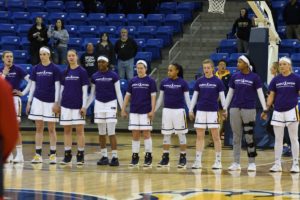 [/media-credit]If you somehow haven’t noticed by now, the Quinnipiac women’s basketball team has been the best team on campus this winter.

Quinnipiac is 11-0 in conference play following an 84-55 victory at Niagara on Sunday and extended its winning streak to 12 games, which is the team’s longest winning streak since…last season.

Last season was the best in team history. The Bobcats won the MAAC regular season, tournament and made it to the Sweet 16.

And this year’s team may actually be better.

Quinnipiac is also on-pace to score 70 or more points in 15 MAAC games this season, something they did *just* 11 times last season.

The Bobcats are scoring at a higher pace this season due to their 3-point shooting. Last season, the Bobcats only shot 30.3 percent from 3-point range compared to 37.2 percent this year. That difference creates 21 more points for every 100 possessions.

It must also be mentioned that several Bobcats have improved this season.

Redshirt junior forward Jen Fay looks poised to be in the running for MAAC-Player of the Year as she has averaged 15.5 PPG and 6.4 rebounds per game (RPG) in conference play. Her total PPG is nearly five points higher than last year (10.9) and has more rebounds (4.9). She’s also shooting an astonishing 48.2 percent from 3-point range in conference play this season, which is an improvement from her 37.9 percent last season.

The two most improved Bobcats this season have been senior guard Carly Fabbri and sophomore guard Taylor Herd.

Herd, who only played nine conference games last year, has started every MAAC game this season. She’s averaging 8.4 PPG in conference play after averaging just 0.9 PPG last season. The sophomore has stepped up to fill in for sophomore guard Vanessa Udoji, who suffered a season-ending injury early in the year.

The Bobcats reached new heights last season, and they look to do the same this season.