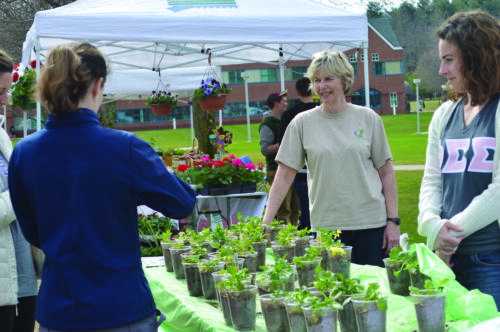 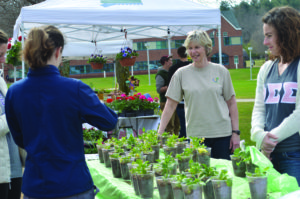 [/media-credit]The beginning of a new year can pave way for new opportunities, but it can also provide an opportunity to bring back lost traditions as well. When it comes to the university, one of the former events held on campus that will be making a reappearance this year is the farmer’s market.

The last farmer’s market took place in 2015, but with the help of several students, faculty and staff, the event is officially being set up so it can be a part of the Earth Day celebration on campus later in April.

Information Analyst IS (Information Systems)-Business Process and member of the QU Sustainability Committee Kimberly Palencia has wanted to bring back the farmer’s market since learning about the retirement of former Biology professor Kristen Richardson in 2015.

“(Richardson) would get sponsors, different departments to help her out and she really was the person behind Earth Day and farmer’s market and everything else,” Palencia said. “But then she retired about two or three years ago and then [the farmer’s market] went away because she was really that leading force.”

This year, Palencia will be in charge of the farmer’s market which will take place on Friday, April 20 between 11 a.m. to 4 p.m on the quad. If raining, the event will be moved into the Carl Hansen Student Center Piazza.

Palencia said there have been others who have provided a great amount of effort in making the farmer’s market come back to campus, like Assistant Director of the Central European Institute (CEI) Hanna Hejmowski.

Hejmowski is the professor of the course Eco Fashion Design- Creativity for Wellness held each spring. At the end of the course, students are required to design a piece of garment made of recyclable materials and showcase it at an annual fashion show. This year, the fashion show and the farmer’s market will be taking place during the same day and Hejmowski is excited for both events to be presented to the student body.

“I really look forward to the event especially about the return of the traditional QU’s Earth Day celebration, with all the vendors coming to our campus that day.” Hejmowski said. “Personally, I hope to raise awareness not only about the Earth Day but also to promote creativity on campus in general.”

The farmer’s market will include multiple vendors who will be selling healthy produce like Farmer Joe Gardens and Thyme & Seasons. Additionally, there will be vendors selling handmade merchandise ranging from organic body butters to vintage clothing, according to Palencia.

There will also be a variety of food trucks, including a truck for Yimello Smoothies, a product that was created by junior entrepreneurship major Kostas Sousoulas.

Sousoulas has never been able to attend the former farmer’s markets, and he said he is very excited to participate in his first one.

“We are very excited and honored to share our smoothies with fellow students,” Sousoulas said. “A lot of my classmates have been asking for this and I am happy to finally be able to do it.”

Co-ed service fraternity Alpha Phi Omega and the Student Programming Board (SPB) are a couple of organizations that plan on contributing to the event by providing volunteers and setting up activities.

Junior marketing major and SPB’s Traditions & Community Chair Isabella Zaccardi said that SPB has not yet decided on the role they will play in the Earth Day festivities, but are hoping to contribute in some way.

“We are happy to hear that a tradition is coming back to campus,” Zaccardi said. “As we progress into the Spring semester we will be better able to determine how SPB can contribute to the Earth Day celebration and awareness at QU.”

The restoration of the farmer’s market was planned many months beforehand, according to Palencia.

“I reached out to several people that I thought were involved and everyone was like, well there’s no student involvement, no one wants to do this anymore,” Palencia said.

Regardless of the initial resistance, there was eventually support for the idea but even then there was an issue with funding money for the event. It was ultimately thanks to the sponsorship of Executive Vice President & Provost Mark Thompson that the farmer’s market was able to truly take off. The money was funded out of Thompson’s own budget, according to Thompson.

“I was aware that the farmer’s market was something that students, faculty and staff enjoyed,” Thompson said in a statement. “I am providing a budget of $3,800 for [Palencia] to cover expenses.”

Students are encouraged by Palencia to participate in the farmer’s market if they want to sell their own merchandise. If students are also interested in joining the Sustainability Committee to further support sustainable principles – economic, environmental and social, they can contact the committee through email at: [email protected]