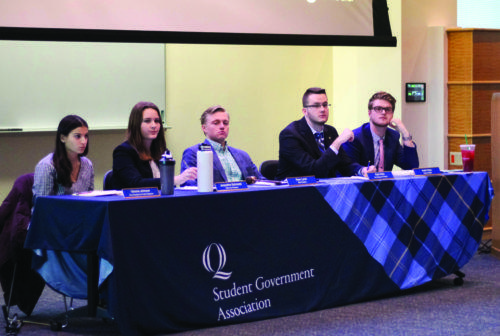 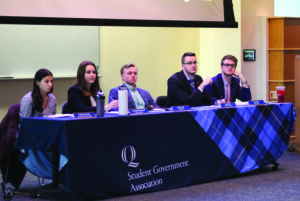 [/media-credit]Rallies and water bottles were topics of discussion at the Student Government Association (SGA) meeting on Wed. Jan. 24. Early in the open forum segment of that day’s meeting, talk turned to seeing how the Quinnipiac community can make a positive impact on the environment.

SGA’s Vice President for Public Relations Victoria Johnson was the person who brought this to SGA’s attention. She said she was contacted by a UCONN student about participating in a rally for a group called CT Go Green. Johnson showed the room the group’s Facebook page, and two events happening in late February.

One of the events is a leadership conference on Feb. 24, and other is the rally on Feb. 28, with participants marching from UCONN’s Hartford campus to the Connecticut’s Capital Building, with speakers talking about how the state should reconsider their Comprehensive Energy Strategy, with one of the issues being that the state has cut back on compensating individuals for buying Solar panels.

Johnson, who said she isn’t a political person, feels that there is importance to bringing up the issue of being green.

“I think that not only if we get students into the habit of recycling and being more environmentally conscious, it’ll make an impact beyond Quinnipiac,” she said.

Due to some of the implications, some of the SGA members questioned whether endorsing the event at an SGA meeting would be overstepping their boundaries. Johnson admits that she hadn’t thought of that at first, but Johnson’s intent in bringing it up was to focus discussion on environmental awareness on campus.

“I just wanted to give them that information if this is something they’re passionate about, and they want to learn more about, please, by all means go to the rally, go to the conference. You don’t necessarily have to represent [SGA]…” she said.

Another way to try helping the environment that was mentioned at the meeting was a water bottle-swapping plan. Proposed by junior class Vice President Joe Iasso, it would involve students buying special water bottles for $10. Then, when a student has used the bottle, they can bring it to the cafeteria, drop it off, and be given a clean bottle. In addition, he wants there to be more water bottle filling stations around campus.

One reason that Iasso wants to implement this is because of how much bottled water that the Quinnipiac population buys, which he said leads to more waste .

“I don’t know if you’ve noticed, but the Pepsi delivery guy comes to Quinnipiac two or three times a day and restocks the Aquafina refrigerator specifically. … Those people are buying an insane amount of water bottles in the Cafe,” Iasso said during the meeting.

In this matter, Iasso is in an advantageous position, as he is also a dining experience intern for Quinnipiac Dining Services, so he was also able to communicate his plan to Chartwells as well.

“It’s kinda nice so that I’ll see the initiative through completely, and it’s nice to have the support of the other interns, [and Chartwells] is so supportive of … what we do as the interns, and what SGA does,” he said.

Sophomore Alyssia Manos is receptive to the idea of the program, even though she says she has more than enough water bottles.

“I think it’s a good idea, but I don’t know if I’d use it, but other people would definitely use it,” Manos said.

Iasso reminds that the bottles are being sold to the students, and that nothing about the initiative is set in stone yet. However, from SGA plans to working with students to revive Student Environmental Association club, Iasso hopes that QU can make more progress.

“I hope to see more practice here beyond recycling that support sustainability, like adding more reusable water bottles, more renewable energy… There are a lot of things that we can do that can save money and help the environment. I think that the University should get behind it and take a closer look at it,” he said.